Glazers out? – Takeover talk ramps up at Manchester United

Manchester United icon Gary Neville has admitted that he has two concerns over the Red Devils’ new £60million signing Casemiro ahead of Erik ten Hag’s side’s match with Liverpool on Monday evening. The Brazilian midfielder is set to complete a move to Old Trafford and is at the ground as his new side hope to pick up their first Premier League points of the season, but Neville has raised concerns over the deal.

Neville believes that Casemiro’s reported £350,000-a-week contract could prove to be a concern in two years when the 30-year-old is past his best. “Sometimes now I don’t get as excited as I should do as a United fan about the signings that come in,” Neville told Sky Sports. “Because I know they are not actually part of the strategy at the start of the summer.

“Every other club is really precise, you don’t see them bouncing around like a pinball at the start of the transfer market from one player to another, it’s De Jong, Rabiot, and it ends up being Casemiro on a phenomenal contract that’s going to cost up to £160m.

“I have to say I think he will do well for the club for a couple of years Casemiro, but someone in two years time is going to pick up a player who is beyond his best years on £20m a year that they can’t shift. 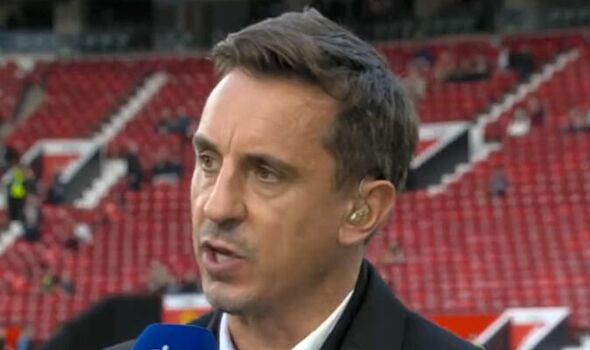 “That might be Erik ten Hag, it might be a new manager, it might be new owners, so there is a large element of desperation with the signing because a five-year contract for a 30-year-old should not happen.”

Casemiro was spotted entering the ground and then shown on the Manchester United pitch pre-game, as he was not registered in time to face Liverpool as Ten Hag picked a midfield two of Scott McTominay and Christian Eriksen to face Jurgen Klopp’s side.

Former Manchester United midfielder Roy Keane was on the panel with Neville, and also had concerns over what he believes is a “desperate” transfer. “He’s a good signing,” Keane admitted. “They paid a lot of money for him. He’s 30 years of age, what’s he got a five-year contract? So if you’re a player and Manchester United are out there you know it’s going to be a great deal.

“It’s a start but they need more, the problem is any player coming to Man United now, as good as they are, they’re coming into a bad dressing room and a bad group of players. The last year or two, they don’t want to run, they don’t seem a good group and that’s a problem for any player however good they are.

“They’re desperate, they’re desperate but I think he’s a good player. You can look at the bigger picture and think it’s a lot of money, long contract, bit like Eriksen getting a three-year deal, agents out there must be delighted working with Man United. They’re desperate and you’ve got to pay over the odds, I suppose.