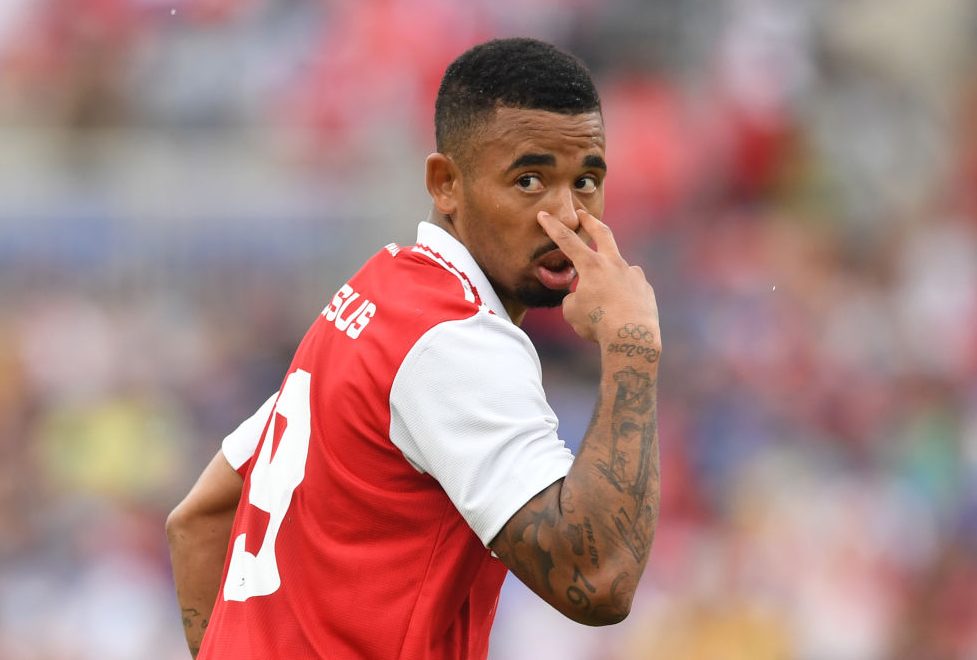 Arsenal striker Gabriel Jesus was left dumbfounded after an altercation between himself and Everton defender Yerry Mina during last weekend’s friendly in Baltimore.

The Brazil international continued the dream start he has made to his Gunners career, scoring his third goal in two outings as Mikel Arteta’s side beat their Premier League rivals 2-0.

Jesus, however, was involved in the one flashpoint in an otherwise even-tempered contest when he was confronted by the giant Everton centre-half who aimed several aggressive gestures in the direction of Arsenal’s headline summer recruit.

‘You know what, I have played with Mina before in Palmeiras,’ Jesus TNT Sports. ‘We were so close to each other.

‘I don’t know the reason for him to do this. At the end I am not a kid any more and I go straight to him as well. After we on the game and that’s all.’

Jesus will get the opportunity to extend his perfect start in the early hours of Thursday morning when Arsenal face Orlando City, by which time he may have been joined by another of his ex-Manchester City teammates in Oleksandr Zinchenko.

The Ukraine international is expected to undergo a medical today after agreed personal terms following City’s acceptance of a bid in the region of £30million.

‘On behalf of the club [I would like to express] gratitude for the effort, how they behave on and off the pitch,’ said City boss Pep Guardiola. ‘It was nice with Alex yesterday because we could say goodbye properly.

‘Unfortunately with Raheem [Sterling] and Gabriel we could not do it because it was the summer time but yesterday we could say goodbye to him and [he can] move on to Arsenal.’

Zinchenko is set to become Arsenal’s fifth major arrival this summer but Mikel Arteta is still hoping to make more additions before the transfer window closes.

Leicester City midfielder Youri Tielemans remains firmly on Arteta’s radar and he accepts more signings are required if the Gunners are to improve on last season’s fifth place finish.

‘We are in the market to keep improving the squad, but there are so many parties involved and sometimes things don’t happen as quickly as you want,’ said Arteta.