It's not quite the plot of the movie Goal! … but it's really not that far off.

In the cheesy 2006 sports drama, Santiago Muñez is an illegal immigrant from Mexico working as a busboy at a Chinese restaurant in Los Angeles who dreams of making it big as a footballer. One day, he's spotted by a former Newcastle United player, who sets him up with a trial which puts him on course to becoming a legend of the game. 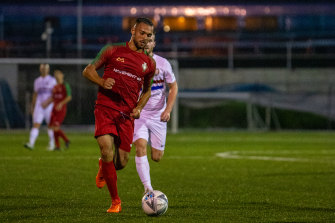 A similar scenario involving the same English Premier League club is unfolding today. Only this time it's French tourist Florent Indalecio, who was on a working holiday visa in Sydney and spent most of his days slaving away as a brickies labourer while playing in the lowly fourth division of football in NSW.

Partly thanks to COVID-19, the Frenchman now finds himself on the cusp of a professional deal with Newcastle – an incredible rise that his former teammates and coaches at Fraser Park FC still can't quite believe.

Indalecio, 23, is on a lengthy trial with the club and is poised to sign an official contract in the coming days, having already gone viral with a stunning bicycle-kick goal in a training session that has set the 'Toon Army' abuzz.

At least two other clubs in England are believed to be ready to swoop if Newcastle manager Steve Bruce decides against making an offer – although after they extended his initial stay by two weeks, the signs are very positive.

Idalecio had just about given up his hopes of a career in football when he moved to Sydney last year, after a succession of false-starts and injuries with clubs in France and the US.

Talent has never been an issue for the fleet-footed attacking midfielder – he was a former youth player with Ligue 1 outfit Saint-Étienne but was kicked out of their academy at age 15 due to behavioural issues.

Fraser Park's captain Alexis Wenzel – another Frenchman – found out about his football background through his brother, who was staying in the same CBD hotel as Idalecio, and invited him to train with the NPL4 club in Marrickville. No promises, just a tryout.

"A lot of people say 'I played at this level' and when you see them play, they're not good enough," said Wenzel.

But with almost his first touch of the ball, everyone could tell Idalecio had something special.

"He was a bit rusty because he hadn't played proper football in about a year, a year and a half," Fraser Park coach Alex Araujo said.

"But you could see his quality, straight away. He just needed the time to get back into the groove of things. I honestly thought in the second half of the season, he'd be scoring at least a goal a game for us as a 10. He was that good."

Idalecio had previously trialled with NPL1 clubs, including Sydney Olympic, but none could offer him a deal because they'd already filled their two foreign player spots. There are no such restrictions in NPL4 – but there are also no A-League clubs scouting for potential signings at that level, which explains how he slipped through the cracks.

In the next few days, we will know if he is going to make it or not. And most likely he will. It's a bit crazy. But it's big.

Wenzel recalls Idalecio working 12-hour days on a construction site before rocking up to training, totally exhausted but still able to put on an absolute clinic.

"It's funny because every training he was telling me, 'my back is so sore'," he said.

"He didn't travel much in Australia, he didn't do much, he only focused on working. I was living in Woollomoloo, he was living in the city. I was giving him rides on my scooter to training every training.

"When you look at him [play], it's just so easy. The way he takes the ball, when he passes, when he crosses – it just looks so easy. All the squad liked him because he gave everything on the pitch. He was so motivated. He wasn't playing for fun." 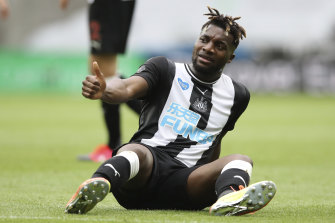 Idalecio played just two official games for Fraser Park before the pandemic hit and halted the NPL4 season. Unsure what to do with his life, his good friend and former Saint-Étienne academy teammate Allan Saint-Maximin – who now plays for Newcastle United – suggested he fly to England, stay with him at his £10,000-per-week mansion and see if he could set him up with a trial.

"I definitely believe we only saw 20 per cent of Flo. Obviously Saint-Maximin knew how good he was, right?" Wenzel said.

"Two weeks after [he signed for Fraser Park], he told us 'my really close mate is Allan Saint-Maximin.' I said, 'wow, that's crazy.'

"Honestly, I can only wish him the very best – firstly because he deserves it, and secondly it will be a nice story as well for someone to go from NPL4 to the Premier League.

"In the next few days, we will know if he is going to make it or not. And most likely he will. It's a bit crazy. But it's big. You can only be happy for him."