Fed on raw egg and sherry, Norman Hunter was Don Revie’s rottweiler… a fearsome centre-half and a genuine great who helped Leeds to the top

They said that, as a footballer, Norman Hunter had one mission in life. He didn’t disagree.

‘The gaffer would say to me: “Norman, you win the ball and give it to those who can play”,’ Hunter once recalled.

‘And that was Giles, Bremner, Gray, Cooper and people like that.

‘Not bad options were they?’ 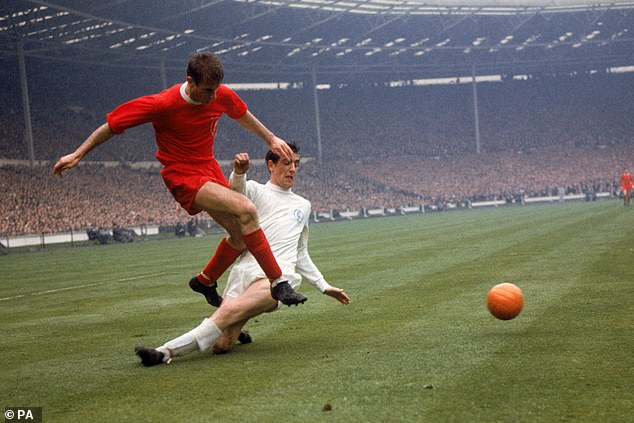 Norman Hunter, a Leeds United hero, died on Friday at the age of 76 years old 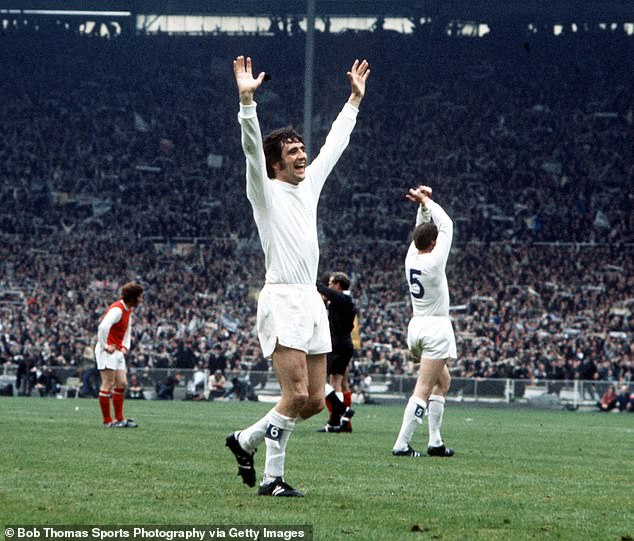 Like many of the genuine greats, Hunter’s appreciation of his own gifts rarely ran as deep as the manner in which he viewed others of his time. Modesty was still a thing back in the 60s and 70s.

‘I was never the quickest,’ the former Leeds and England centre half told the Independent many years later.

‘But I could read situations.’

The truth is that Hunter – who died on Friday at the age of 76 – was a very fine footballer indeed.

A central defender good enough to occasionally play in midfield and to feature for his country 28 times, he starred in a Leeds United team taken by Don Revie to the summit of the English and European game in the late 1960s.

Hunter played 726 times for Leeds in a 15-year residence that stretched from 1962 to 1976. He won two league titles at a time when Leeds didn’t finish outside the top four in ten years. Along with that, he also played in the 1975 European Cup final defeat to Bayern Munich.

Born in Gateshead and so desperate to play for Newcastle he subsequently said he would have crawled to St James’ Park on his knees, Hunter was instead picked up by Leeds as a young teen. 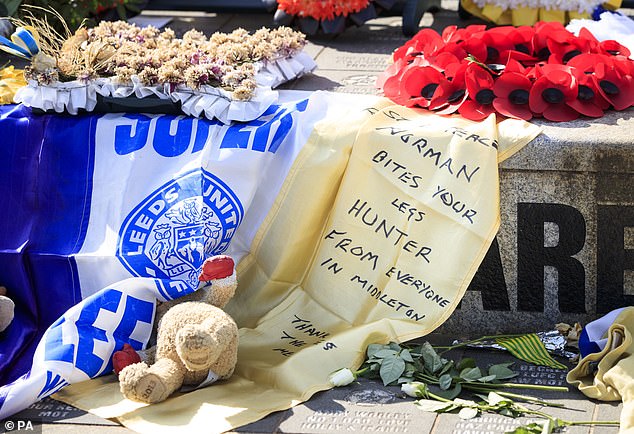 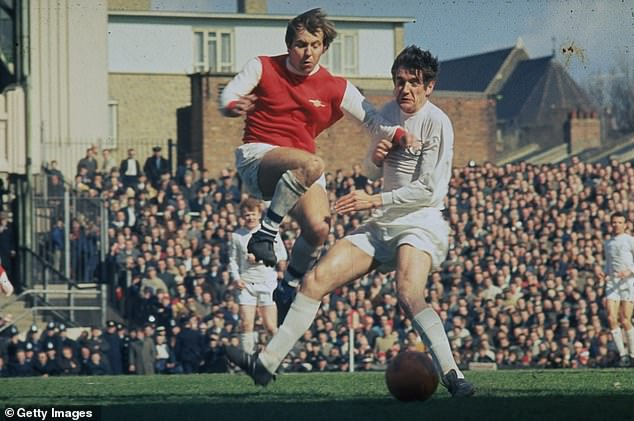 As a youngster, Hunter pined to play for Newcastle but was soon picked up by Leeds instead

Promoted by Revie from the youth system after previous manager Jack Taylor judged him inadequate, he was a skinny, rakish youth – a far cry from the physically imposing defender he was to become.

Hunter was fed a daily ration of raw egg and sherry by his new manager in a bid to speed up his development. It is fair to say, he got there in the end.

As Leeds’ reputation for uncompromising football grew steadily under Revie, so too did Hunter’s as one of the most feared centre halves in Europe.

Some others cut from the same cloth – the likes of Liverpool’s Tommy Smith and Ron Harris of Chelsea – later confessed to frustration that their ability as footballers was overlooked. Not so Hunter.

‘Don Revie always used to tell us to go in hard with the first tackle, because the referee would never book you for the first one.

‘We used to call it the freebie. I’d go in hard, pick ’em up, say sorry to the referee, and sometimes you hardly saw the player again.

‘I was honestly never concerned about anyone outside the Elland Road dressing room. I didn’t care what they thought.

‘Except maybe for Alf Ramsey.’

Hunter was a member of the England squad that won the World Cup under Ramsey in 1966. He never played – having the misfortune to find himself in a queue behind captain Bobby Moore and club mate Jack Charlton – but was awarded a winner’s medal 41 years later.

By 1973 he was in the England team but made a mistake during a must-win qualifier against Poland at Wembley. The game ended 1-1 and England stayed at home for the World Cup finals that followed.

Hunter was actually voted the PFA player of the season that year but the error remained one of the great regrets of his stellar career.

‘It has stayed with me ever since,’ he said.

Another was his involvement in a fight with Derby County’s Francis Lee at the Baseball Ground in 1975. 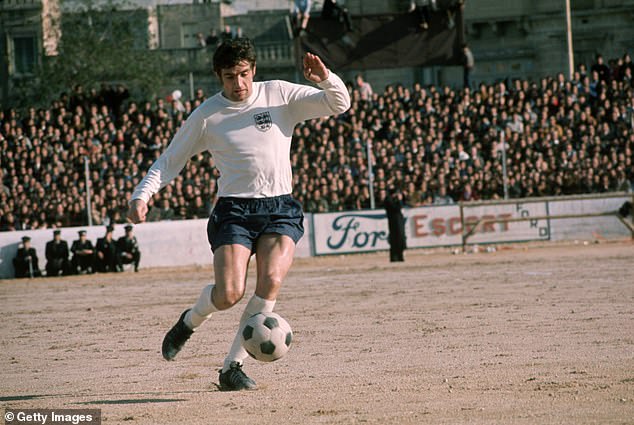 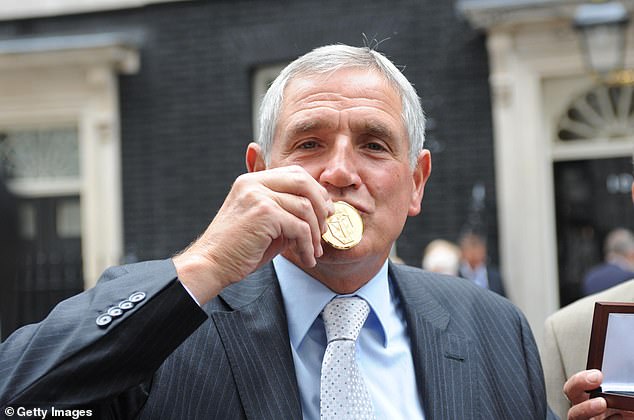 Placed at number one in a list of the ‘Ten Most Spectacular Sporting Dismissals’ by the Observer in 2003, it was described by the paper as ‘a pit bull savaging a rottweiler’. The paper never ventured an opinion as regards which canine was which but it was a scrap so fierce it continued all the way to the dressing rooms after the inevitable red cards had been shown.

‘I played over 700 games for Leeds, 120-odd games for Bristol City, and I’m remembered for three things,’ Hunter said.

‘The “Norman bites yer legs” thing [scrawled on a banner at the 1968 League Cup final], the punch-up with Francis Lee, and that goal against Poland.

‘I was never even given a chance to forget about it, because every fourth year, when we tried to qualify for the World Cup, who did we draw in our group? Bloody Poland. ‘Unbelievable.’

Like many of his stories, that one was always one told with a self-deprecating smile. Hunter knew his worth and didn’t have to look at his draw full of medals to underline it. 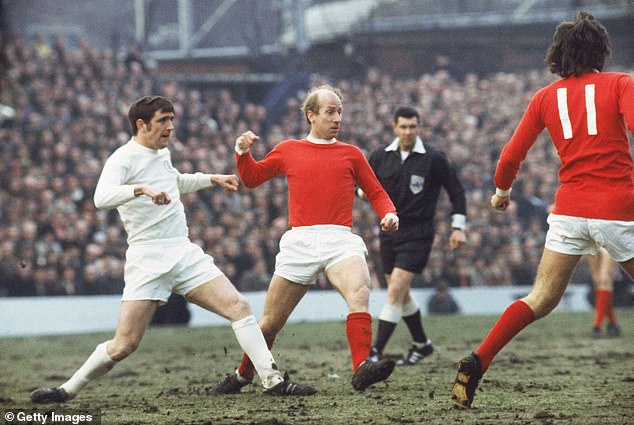 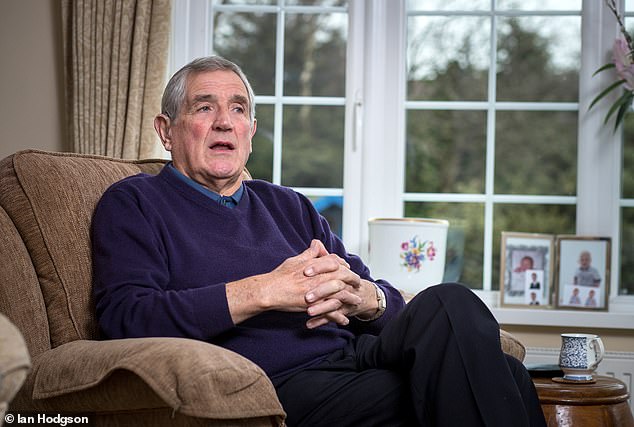 A constant face at Elland Road long after retirement and once spells in management with Barnsley, Rotherham and Bradford had finished, Hunter long served as a reminder of better days at the club through his work with BBC Radio Leeds. His press box countenance was certainly warmer than his presence on a football field ever felt or looked.

News of his death from Coronavirus will prompt fresh appreciation of a career that brought him two league titles, an FA Cup, League Cup and two Inter-Cities Fairs Cups. Only Charlton, Billy Bremner and Paul Reaney represented the club more times. Nobody did so with more distinction.

‘For two or three seasons, Leeds were as good as anyone in Europe,’ Hunter once said.

Few argued at the time and fewer would disagree now.