The A-League season begins in less than two weeks. Chances are that's probably news to you, unless you happened to wander past Darling Harbour on Monday, where Fox Sports rolled out a hastily arranged launch event by getting a handful of players to take shots from the edge of the water at Mark Bosnich, who protected a set of goals on a floating pontoon.

Season launches don't really matter. They're a uniquely Australian gimmick, designed purely for media outlets to fill their boots with content before the real deal begins on the field. But they do give an insight into how smoothly things are running behind the scenes – and on that front, this was an eye-opener. 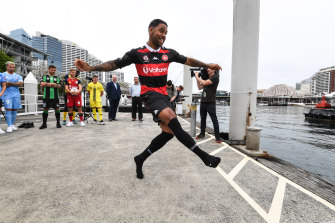 Five years ago, domestic football was in a much happier place. The A-League was still basking in the afterglow of Alessandro Del Piero's dream spell at Sydney FC. Western Sydney's rise from emergency expansion team to cultural phenomenon and then to champions of Asia redefined what people thought was possible for Australian clubs.

The Socceroos won the Asian Cup in front of 76,385 fans at Olympic Park, with a squad almost entirely comprised of players who made their names in the A-League. The sleeping giant was awake, and on a rampage. 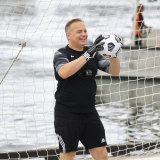 Mark Bosnich pulled on the gloves on Monday, in the middle of Darling Harbour.Credit:Getty

It's been pretty much downhill since. And Monday's slapdash, unimaginative launch at a sports bar in Barangaroo was a solid metaphor for the state of things.

Not every club was represented – there were no players from the Newcastle Jets, Brisbane Roar, Perth Glory or the W-League's Canberra United. Players from two clubs, Central Coast and Adelaide, turned up but weren't on the original list. At least they were there, unlike most members of football's ever-diminishing press pack, whose invites were seemingly lost in the mail.

FFA was quick to point out, privately, it had nothing to do with it – the professional leagues are no longer its responsibility. The clubs, who have operational control of the A-League, stressed it was not actually their official 'season launch' – a tired concept they want to do away with entirely – but a media event run by Fox, their broadcast partners. For now.

Greg O'Rourke, the head of the A-League, was nowhere to be seen, and has actually been gagged from speaking publicly until the long-awaited deal for the 'unbundling' of the professional leagues from FFA is signed off. That could come as soon as this week, but we've heard that before. Wanderers chairman Paul Lederer told the Herald a while back that it would be done within days. That was 430 days ago.

The main reason the A-League has fallen from that high watermark of five years ago is because FFA and the clubs have been arguing over who should run it, rather than actually running it.

The war ended ages ago, but the fog hasn't lifted. Until that independence deal is signed, the A-League is technically the legal responsibility of FFA – but it has already washed its hands of it. Until it's signed, the clubs say they can't even release the genuinely exciting plans they are sitting on to reboot the A-League, let alone action them, or set up proper governance and management structures.

We're trying to promote the game and it's very difficult when you see some of the state of affairs that's happening.

Whoever is to blame, all the public sees is a competition stuck in a weird purgatory. They see a league with no naming rights sponsor, no long-term broadcast deal, nobody at the wheel and no reason to think this season won't be another write-off.

Players feel it, too. "The game's not in the greatest place in this country at the moment. It's just sad when you see some of the things that go on," Melbourne Victory star Robbie Kruse said.

"The launch … there's not even someone here from Newcastle. We're trying to promote the game and it's very difficult when you see some of the state of affairs that's happening. Hopefully we can all take everything on board and the players can put on a good season and get the buzz back around the game again."

The irony is this A-League campaign has the potential to be the best of the past few, in spite of everything. The nosedive in quality that many anticipated post-COVID hasn't eventuated – at least on paper.

No clubs have collapsed; even the ownerless Jets will be saved from oblivion. And fans are getting what they have long been asking for – more young players, more imports from Asia, more teams, more games at boutique venues, and more kick-offs in cooler weather instead of long, slow afternoons in the summer sun.

Melbourne City sharpshooter Jamie Maclaren can see the bright side, and says it's time for people to stop "taking this game for granted" – players, coaches, administrators, supporters and media.

"I just want this league to be back to what it can be – or what I know it can be, and have 20,000 fans at the stadium on the regular; fans tuning in, not turning a blind eye and being negative about it," Maclaren said.

"There was a period where it was a little bit stale, and now it's time to really ramp it up. That's why I'm here – I'm proud to be playing in the A-League. What's wrong with our backyard? Appreciate what we've got."

And so it's over to the players to salvage what looms as another 'transition' season for the A-League. They'll manage, like always, and their football will do the talking, but they need help from their employers – or whoever's actually in charge – to amplify the message.

If this is rock bottom, the silver lining is the only way is up.