Pierre-Emerick Aubameyang could well find himself in the awkward position of playing for Chelsea while sporting a tattoo of him wearing the shirt of their London rivals Arsenal should he complete a transfer to the Blues. The former Gunner previously got an image of himself walking out of the Emirates Stadium tunnel hand-in-hand with his two children inked on his right arm prior to his unceremonious Arsenal exit.

The Gabonese goal-getter spent four years in north London after joining from Borussia Dortmund back in January of 2018. During his time with the Gunners, the striker found the net 92 times in 163 appearances and also led Mikel Arteta’s men to one FA Cup and one Community Shield success.

An admirer of tattoos with an affinity to Arsenal, Aubameyang ensured he would never forget his time in north London after deciding to get a shot of him walking onto the Emirates pitch alongside his family in the club’s colours emblazoned near his elbow on his lower right arm. His bond with the club would soon suffer a setback, however.

Following a well-documented fallout with Arteta over his ill-discipline, Aubameyang was soon stripped of his club captaincy and exiled from the Spaniard’s first-team. A mutual termination of his contract in early February of this year subsequently paved the way for the striker to join Barcelona.

A matter of months on, the 33-year-old is on the verge of sealing a Premier League return with Arsenal’s bitter London rivals Chelsea. The Blues are understood to be closing in on a deal in the region of £25million for the former Gunner.

Following his departure from Arsenal earlier in the year, Aubameyang expressed his “hurt” at how his time with the club had ended, while admitting that captaining the north Londoners was something he would “forever keep in my heart”.

He wrote: “To the Arsenal fans, thank you for making London home for myself and my family for the past four years. We went through ups and downs together and your support meant everything to me. 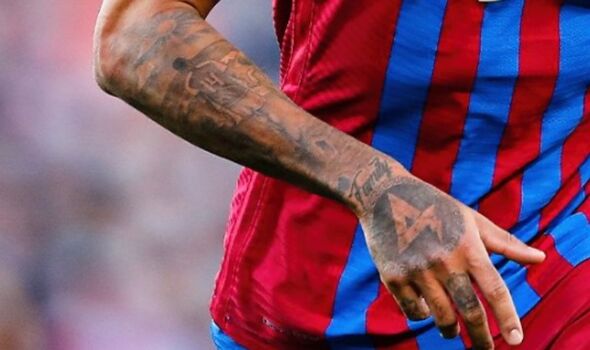 “Having the chance to win trophies and the honour of being the captain of this club is something I will forever keep in my heart. I have always been 100% focused on doing everything I can for this club which is why leaving without a real goodbye hurts – but that is football.

“I’m sad I did not get the chance to help my team-mates in the last few weeks, but I have nothing but respect for this club and truly wish all my guys and the fans all the best and many successful years in the future! Love, Auba.”

Though situations change in football and a transfer to Chelsea seems like an ideal opportunity for Aubameyang to resolve some unfinished business in the Premier League, there’s no getting away from the fact that it will be bizarre to see one of the Blues’ brigade sporting a nod to the red half of north London.