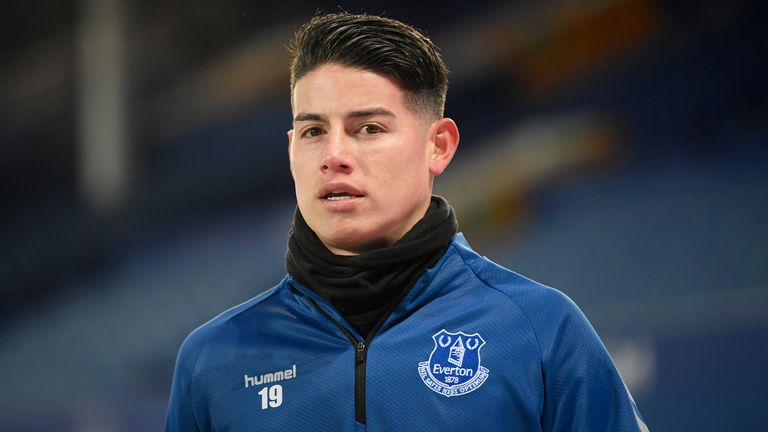 Team news, stats and prediction ahead of Everton vs Burnley in the Premier League on Saturday (kick-off 5.30pm).

Everton midfielder Abdoulaye Doucoure could be out for up to 10 weeks with a broken bone in his foot while playmaker James Rodriguez will also miss the visit of Burnley.

Manager Carlo Ancelotti is hopeful Doucoure will return before the end of the season but will not play James until after the international break to allow the Colombia forward to fully recover from a calf problem that has restricted him to three appearances in the last eight matches.

Burnley left-back Charlie Taylor is expected to miss the match with a hamstring problem. Taylor was replaced in last weekend’s 1-1 draw with Arsenal, having initially tried to play on with the injury.

Johann Berg Gudmundsson is fit to play after being withdrawn as a precaution, but Ashley Barnes remains out and Jack Cork is a doubt.

Everton vs Burnley will be shown live on Sky Sports Premier League and Main Event from 5pm; kick-off 5.30pm. Sky Sports customers can watch in-game clips in the live match blog on the Sky Sports website and app. Highlights will also be published on the Sky Sports digital platforms and the Sky Sports Football YouTube channel shortly after the final whistle.

I am still having trust issues with Everton, especially in home games when the onus is on them to make the running.

They secured a first win in six home Premier League games against Southampton, having picked up just one point from their previous 15 points available.

Quite staggeringly, Everton have not won the shots count in all of their matches since drawing with Burnley on December 5. That’s a 16-game run. I cannot back them here against a team that has lost just one of their last seven. I will play the draw.

The dynamic between Richarlison and Dominic Calvert-Lewin as a front pairing should continue to prove a fruitful tactic for Carlo Ancelotti though. Since switching to play as a centre-forward – he moved back to a more left-sided role in a formation switch at Chelsea – the Brazilian has scored four times in five games. His clever movement, dovetailed with Calvert-Lewin’s physicality is an exciting formula for Everton not only for the remainder of the campaign but in the long-term too.

I want to back Richarlison to score first in this one. He looks a shade overpriced at 5/1 with Sky Bet in comparison to Calvert-Lewin, who despite having his best goalscoring season with 18 has only managed two goals in his last 13 games and is being priced up as the 13/5 favourite.

Pitch to Post Preview – North London derby build up; plus Diallo’s instant impact, and how do Everton become a top four side?

In this week’s Pitch to Post Preview Podcast we turn our attention to Arsenal vs Tottenham, as the north London rivals prepare to face off at the Emirates. Peter Smith is joined by Sky Sports football journalists Ben Grounds and Ron Walker to assess the big match. The panel reflect on positive Europa League wins for both sides, consider the potential team selection issues, and which team needs the win more.

We also hear the latest from Sky Sports News reporter Alan Myers on Everton’s push for the Champions League spots, ahead of their tricky test against Burnley, while Ron returns to assess Amad Diallo’s fine first goal for Manchester United and the challenge they face on Sunday against an in-form West Ham, who also have ambitions for the top four.