Everton are confident of completing a £30million deal for Lille rising star Gabriel Magalhaes. Carlo Ancelotti has been eager to strengthen his defence since arriving at Goodison Park in December and the 22-year-old centre-back fits the bill.

Everton submitted a bid for Magalhaes in March and are continuing transfer talks despite football being on hold due to the coronavirus crisis.

Despite intense competition from clubs across the continent, the Toffees are closing in on a deal, according to the Daily Star.

It was previously reported Chelsea were optimistic of agreeing a deal for Gabriel while Arsenal and Tottenham have also been credited with an interest.

Gabriel, who extended his contract with Lille in January until 2023, has admitted he is aware of the speculation but is leaving it up to his agents to sort out. 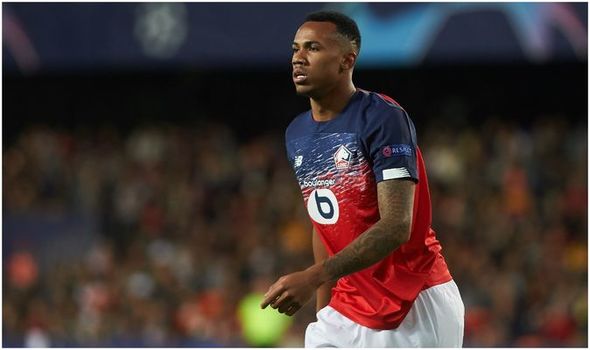 “I can see them, yes. Every day, my friends send me things: clubs, lots of clubs,” he told France Football.

“I’m happy because my work, and everything I’ve done, is rewarded. It’s not only good for me; it’s good for other people around me.

“But I’m happy in Lille; I’m very, very happy at the club. I love this club. I don’t know what’s going to happen, but the objective is to bring LOSC back into the Champions League again.

“For the rest, I will let my agents and the club talk about it, but I am very happy here.”

Newcastle takeover EXCLUSIVE: Insight into deal and why Mike Ashley has chosen to sell

Gabriel, who has yet to feature for Brazil at senior international level, took in brief loan spells at Troyes and Dinamo Zagreb before breaking into Lille’s first team.

He has made 34 appearances in all competitions this season and played in all six of their Champions League group stage including two against Chelsea.

Everton have shipped 46 goals in 29 Premier League matches but made steady progress up the table after Ancelotti was appointed Marco Silva’s full-time successor in December.