Report as City remain on course for an unprecedented Quadruple; Everton’s 26-year wait for a major trophy goes on; draw for the FA Cup semi-finals will be made on Sunday evening at 5.45pm Late goals from Ilkay Gundogan and Kevin De Bruyne sent Manchester City into the FA Cup semi-finals with a 2-0 win over a stubborn Everton at Goodison Park.

Everton sat deep in a goalless first half, but came closest to opening the scoring as Yerry Mina’s glancing header was cleared off the line by Oleksandr Zinchenko.

Young third-choice Everton goalkeeper Joao Virginia made a superb fingertip stop to deny Raheem Sterling after the break, but City broke the deadlock with six minutes remaining as Gundogan reacted fastest to head into an empty net after Virginia had tipped Aymeric Laporte’s effort onto the crossbar.

And sub De Bruyne wrapped up the win late on, latching onto fellow sub Rodri’s through ball and lashing past Virginia (90), despite Everton protestations of a high foot from Riyad Mahrez in the build-up.

The result means City have won 25 of their last 26 games as they remain on course for an unprecedented Quadruple, while Everton’s 26-year wait for a major trophy goes on. The draw for the FA Cup semi-finals will be made on Sunday evening at 5.45pm.

Man of the match: Fernandinho

Everton’s plan was clear early doors – at one point with 25 minutes gone, they had completed just 17 passes to City’s 209 – but Virginia in the Everton net had little to do in the first half as the Premier League leaders struggled to find gaps in the defence.

Everton came closest in a goalless first 45 minutes as Yerry Mina’s near-post header form a Lucas Digne corner was headed off the line by Zinchenko, while goalkeeper Zack Steffen’s blushes were spared as his misjudged rush-out to dispossess Dominic Calvert-Lewin bounced fortuitously out for a corner. 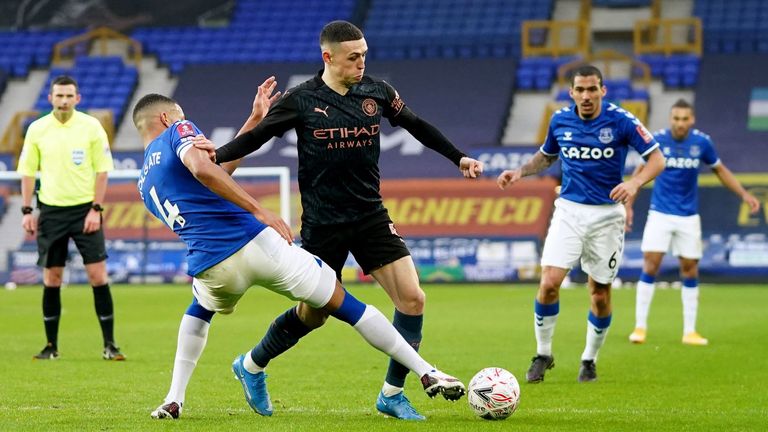 City upped the ante slightly after the break, and, after Richarlison struck a half volley a yard wide of Steffen’s right-hand post, the visitors went up the other end and should have scored.

Fernandinho fought his way through two Everton challenges before finding Sterling unmarked in the box, running onto the ball, but the England man did not connect properly with his shot 12 yards out as Virginia got the slightest touch to divert it wide. 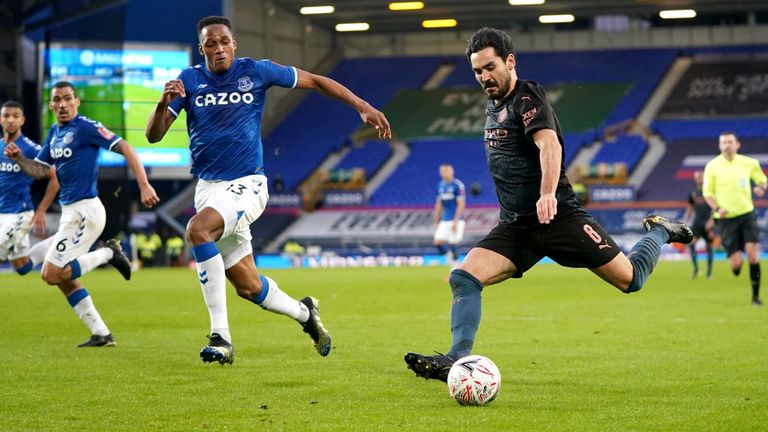 Phil Foden went within inches shortly after with an effort from the edge of the box, but City finally got their opener with six minutes remaining through a familiar source.

Gundogan got his second goal this week, and his 16th this season, reacting quickly to stoop low and head into the empty net after Virginia had brilliantly tipped Laporte’s poked shot onto the bar.

City had brought on the cavalry from the bench in Rodri, De Bruyne and Mahrez, and all three were involved in the second goal to kill the game off. 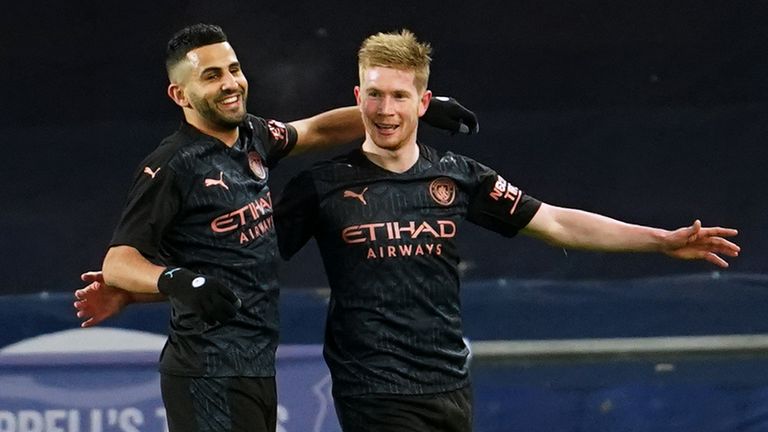 Everton felt there was a high foot from Mahrez on Mina as the ball broke for Rodri, but the Spaniard superbly spotted the run of De Bruyne, who was found running in-behind before smashing past Virginia.

Everton made four changes from the side that lost 2-1 against Burnley last week. Virginia came in for injured goalkeeper Jordan Pickford, Michael Keane was on the bench and replaced by Yerry Mina, while Alex Iwobi and Tom Davies were replaced by Seamus Coleman and Gylfi Sigurdsson.

City made six changes from the 2-0 win over Gladbach in midweek; Steffen was in for Ederson in goal, Laporte and Zinchenko were in for Stones and Cancelo in defence, while Rodri, De Bruyne and Mahrez came out for Fernandinho, Sterling and Jesus elsewhere.

City’s class shone through eventually, meaning they have reached the FA Cup last four for the fourth time in five years under Pep Guardiola.

The draw for the semi-finals of the FA Cup will take place on Sunday evening after the conclusion of Leicester vs Manchester United.