Fans have slammed Eric Dier over the Tottenham defender’s skewed clearance prior to Brentford’s second goal in their 2-2 draw on Boxing Day.

The England international blazed a left-footed clearance directly out for a corner while under minimal pressure, which came before Ivan Toney doubled the hosts’ advantage.

Toney added Brentford’s second of the day from the resulting corner, turning in at the back post from Christian Norgaard’s flick on. 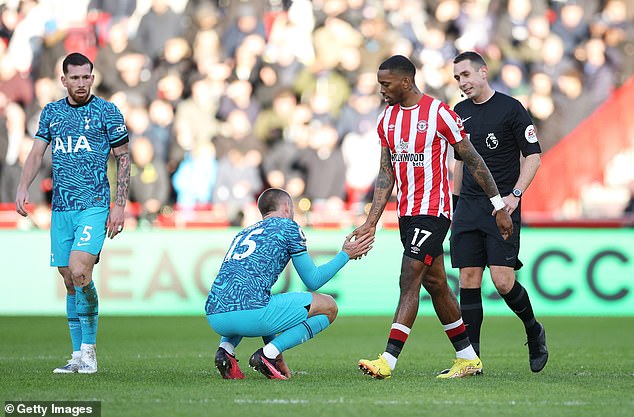 Fans quickly expressed their frustrations at Dier, suggesting the goal was ‘inevitable’ after his mistake.

‘I’m just so fed up of Eric Dier. So fed up,’ another added.

‘As long as Eric Dier starts for Spurs, the trophy drought will continue. Nobody even near him on that miscue. He’s a catastrophe waiting to happen.’

‘This is the incident that leads to the corner [Dier clearance], he looks to the sky Antonio Conte,’ Upson said on Amazon Prime.

‘But after that, they have to step up and do their job Tottenham, they just don’t do it.

‘The ball is good, the movement is good.

‘Toney is hungry in the box, he is on the move, anticipating. There is no doubt from Toney he is going to win the ball.

‘Tottenham don’t deal with it and pay the price. It was horrible wasn’t it.’

Dier has featured in all Tottenham’s Premier League matches this season, with the central defender having earned a recall to the England squad for the World Cup.

The 28-year-old featured twice for Gareth Southgate’s side in Qatar as a substitute.