Macarthur FC could be forced to take multiple home games on the road due to the horrendous state of the pitch at Campbelltown Stadium – the blame for which the A-League club has put squarely on the local council.

The Bulls have slammed Campbelltown City Council for keeping them in the dark over the patchy, uneven turf at the venue, which has forced Sunday’s clash against the Wellington Phoenix to be relocated to Newcastle as part of a double-header at McDonald Jones Stadium. 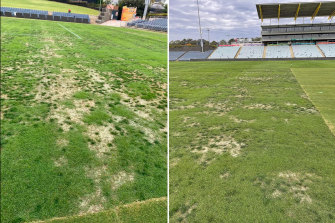 The field at Campbelltown Stadium. Macarthur FC’s opening match of the A-League Men’s season was relocated because of the state of the surface.

Players and coaches arrived at the stadium for a training session on Friday morning and were shocked when they were greeted by a surface that was later deemed unsafe by the Australian Premier Leagues.

Sources familiar with the ground’s condition suggest it is highly unlikely the stadium will be ready to host Macarthur’s second home game of the season – on December 5 against the Central Coast Mariners – and that the entire pitch may need to be relaid after what has been described as a renovation program gone horribly wrong.

Campbelltown City Council has been contacted for comment. Mayor George Brticevic wrote on Facebook that “council ground and the external experts deemed it safe, but of course the aesthetics aren’t pretty!”

The stadium has not seen any sporting activity since Macarthur last played there on June 4, and it’s unclear why nobody had checked on it until two days out from their first match of the new season.

It’s a major embarrassment for the new-look A-League, which launched what it hoped would be a bold new era for the sport on Friday night with the first match broadcast on Paramount +, the new streaming service owned and operated by Channel 10’s American owners ViacomCBS.

“The club is equally disappointed with the decision to move the venue of tomorrow’s round 1 game. Council did NOT inform the club of any renovation issues, and in particular of its extremely late decision to relay portions of the pitch with ready to play turf early this week,” a Macarthur FC statement said.

“The club only discovered the true nature of the pitch at 8am Friday morning. In discussions with turf contractors, council and the A-Leagues it was agreed that the pitch was not suitable for any A-League fixture.

“The club discussed a number of alternatives with the A-Leagues, including local NPL venues, however due to the non-availability of these venues and the logistics around TV broadcasting, police, security, catering etc, there was no other feasible alternative other than to play a double header tomorrow night at McDonald James Stadium.

“The club is looking forward to fruitful discussions with the turf contractors, council and the A-Leagues in to how to move forward and remedy the current situation.”

It continues a difficult lead-in to the A-League campaign for the Bulls, who have conceded 17 goals in four defeats across pre-season, but beat Newcastle Olympic 3-0 last week in the FFA Cup. They were rocked last month by the sudden retirement of skipper Adam Federici – days after ex-captain Mark Milligan quit his role as an assistant to coach Ante Milicic, due to concerns over the club’s direction and a disagreement over the nature of his position.

The Phoenix, who are currently based in Sydney due to international travel restrictions, have scrambled to find a hotel in Newcastle. “It was an away game for us anyway,” coach Ufuk Talay said. “It doesn’t look good at all, considering no-one had been playing on it for nine months.”