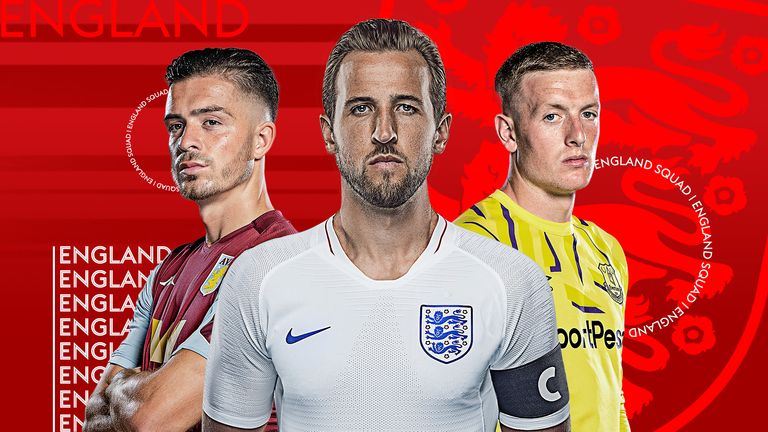 Gareth Southgate names his England squad for the upcoming UEFA Nations League games on Tuesday at 2pm – his first squad announcement since November – but who is in the running to make it?

Plenty has changed both on and off the pitch since England beat Kosovo 4-0 on November 17, and Southgate now has the intricate task of balancing fitness, club demands, previous form and current form ahead of the Nations League clashes away at Iceland (September 5) and Denmark (September 8).

Here, we run through the main talking points for his selection, which newcomers may be included, the dilemmas and what the stats say… 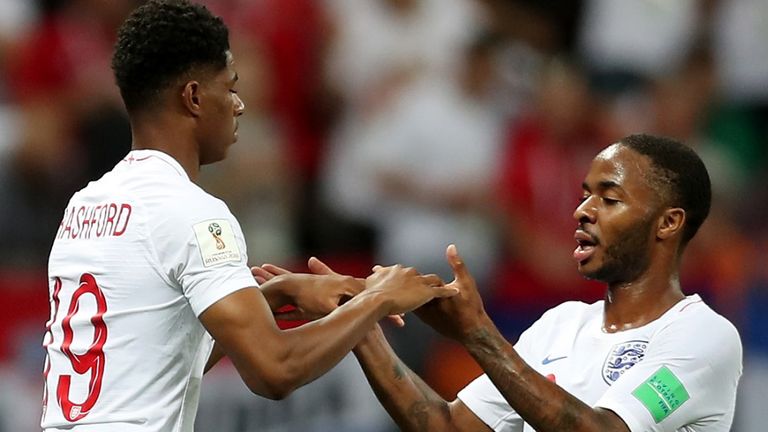 Southgate is determined to pick his strongest possible squad for next month’s Nations League openers with Manchester United and Manchester City’s English players receiving no special dispensation or extra rest.

City and United’s seasons ran later than any other English club, because of their involvement in the latter stages of European competition. City were beaten by Lyon on Saturday, August 15, while United lost to Sevilla a day later.

It means United’s English players – if selected by Southgate – will have had just 13 days’ rest by the time they join up at St George’s Park on Sunday, August 30, and City’s players 14 days off. But Southgate will make no apology for naming those players in his squad when it is announced on Tuesday – and he can point to other countries by way of example. Spain have called up David de Gea, Eric Garcia, Rodri and Ferran Torres from the two Manchester giants; Croatia have named Ivan Perisic for their squad – even though his Bayern Munich side made the Champions League final on Sunday night.

It would be surprising were the England manager to offer some of his star players extra rest, when their rivals are not doing the same. Equally, it would be wrong to think that the likes of Marcus Rashford and Raheem Sterling would have been relaxing at home or on holiday, had England given them extra time off to recuperate.

It’s highly likely they would have been called in for pre-season training with their clubs on the same day they’re due to report at England HQ.

Will Southgate include Maguire? The England manager is being kept informed of developments with Harry Maguire, and the legal proceedings taking place in Mykonos.

It remains to be seen whether Southgate will include Maguire in his plans, after the United captain pleaded not guilty to charges after appearing in court following his arrest on the Greek island.

The defender, 27, was arrested following an alleged fight on Thursday night, along with two other Britons, aged 28 and 29.

Southgate has always expected the highest standards of behaviour from his squad, and the stature of a player has been no barrier to them being dropped. Raheem Sterling’s omission from the starting team to play Montenegro last November, following his spat with team-mate Joe Gomez, is a case in point.

Sterling to have coronavirus test 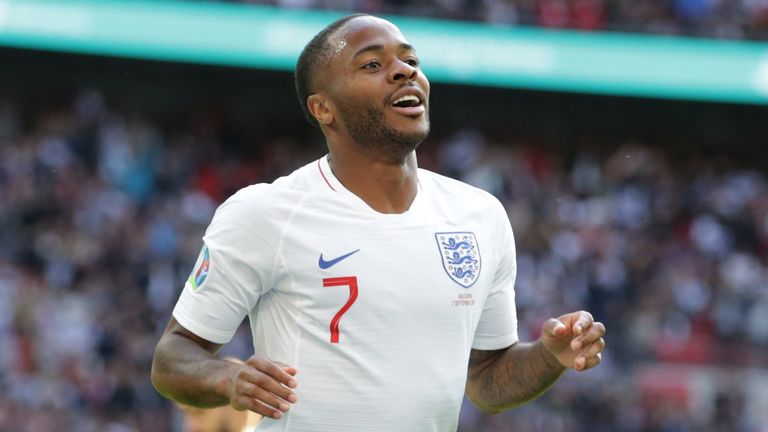 There is another potential headache on the horizon with Sterling to be tested for coronavirus before he is allowed to join England’s bio-secure bubble at St George’s Park next week.

Sterling was at a party with eight-time Olympic champion Usain Bolt in Jamaica on Friday night – Bolt has since announced on Instagram that he is self-isolating while he awaits the result of his own coronavirus test.

That has led to worldwide speculation that Bolt has the virus – a situation which he has since clarified. He says he has no symptoms, but is quarantining himself just in case.

Sterling will be tested – along with every England player selected – before they are allowed into the training camp in Burton next Monday. Any player who has symptoms or returns a positive test will not be allowed to come into contact with the rest of their teammates.

The case for the defence: Uncertainty, recalls and a new face? Defence could prove the most problematic area for Southgate. There is a decision to be made on Maguire, which may or may not be taken out of the England manager’s hands.

Maguire played in 26 of 31 matches since making his England debut, four more than anyone else in that period. His status for club and country is secure and no one in world football played more than his 5,500 minutes in 2019/20.

If Maguire isn’t in the squad, there will be a void and it would mean Gomez needs a partner. Who would Southgate turn to? John Stones started in England’s win over Montenegro and since then, he’s only started in 10 Manchester City games – Pep Guardiola’s side have played 40 times in that period. 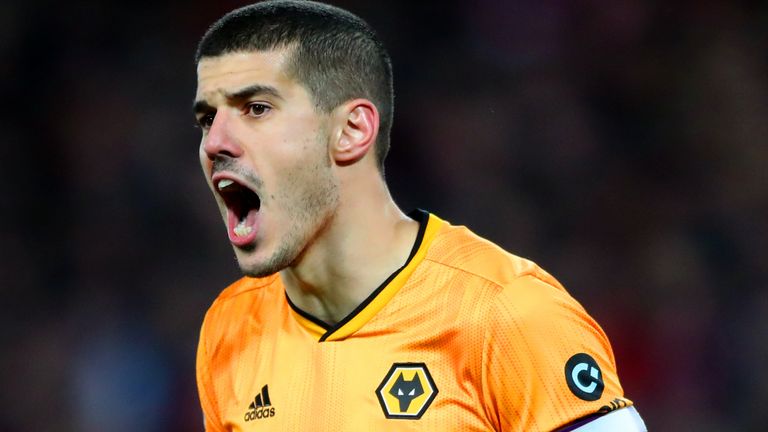 We know where the England manager stands on selecting players who aren’t playing for their clubs. Fikayo Tomori has faded out of contention at Chelsea with not a single minute of action in Project Restart.

But by that measure, is it not time for Southgate turn to Conor Coady? He is 27, but a rock for Wolves and is reaping the benefits of Nuno Espirito Santo’s management. Last seen playing internationally for England U20s in 2013, is Coady’s time now?

Or what about a recall for a rejuvenated Chris Smalling? Not seen in international football since 2017, Southgate went to watch the centre half during his impressive loan spell at Roma. There may be questions over his ball playing skills but this could prove a sensible move to bring him back into the fold. And if we’re looking for a real headline among the defenders, then a call up for Arsenal’s Bukayo Saka could be on the cards. The teenager has yet to play for England’s U21s but a breakthrough season with goals and assists surely merits real consideration, especially considering that Ben Chilwell and Luke Shaw are injured.

Saka himself has spoken about the ‘tough choice’ of choosing between England and Nigeria. The issue of dual nationality is a delicate one for any player and international manager to navigate.

Thankfully, the issue at right-back is more straightforward. Trent Alexander-Arnold and Kieran Trippier are the incumbents, with Aaron Wan-Bissaka also pushing for a spot.

Are there any fitness concerns? 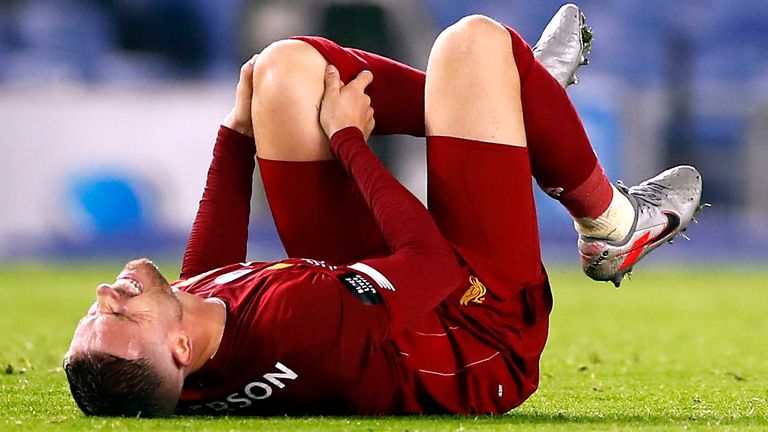 Discussions over player fitness are ongoing between the FA and the clubs – Chilwell, Shaw, Alex Oxlade-Chamberlain and James Maddison are almost certain to miss out because of injury, with Jordan Henderson another major doubt.

But it’s clear England’s manager will pick the very best players he has available to him for his squad – irrespective of the number of domestic games they have played.

That’s not to say energy levels and fatigue will be ignored during England’s preparations. The senior squad’s fitness and medical staff regularly recommend certain players train indoors or are absent from training completely to avoid injury.

The starting side Southgate selects for the opening Nations League game against Iceland on September 5 is likely to be dictated to a large extent by the energy levels shown by players in training sessions leading up to the game.

Will Grealish finally make it? 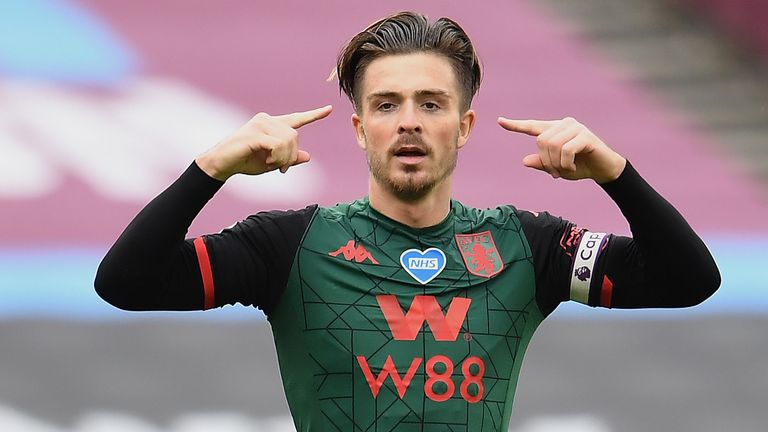 Grealish’s future at Villa will undoubtedly be one of the sagas of the transfer window, but his failure to make an England squad is also a hot topic.

Despite appearing for Republic of Ireland at Under-21 level, Grealish chose England in 2015, and five years on he is still waiting for his first call-up.

Form-wise, he was slow to get going after the restart, but his fine performances in Villa’s final four games dragged his boyhood club out of the drop zone and safe for another year. Only two players received more Sky Sports Premier League man-of-the-match awards in the 2019/20 season than Grealish’s nine, and his form throughout the season rightly has Manchester United and others keeping a close eye.

But the doubt surrounding his inclusion is less about form and more about positioning. Grealish has played in several positions for Villa this season, but performed best on the left of a front three. Even then, the 24-year-old had a relatively free role as Villa’s talisman and best player by a country mile. The team was focused around him, but that won’t be the case for England. 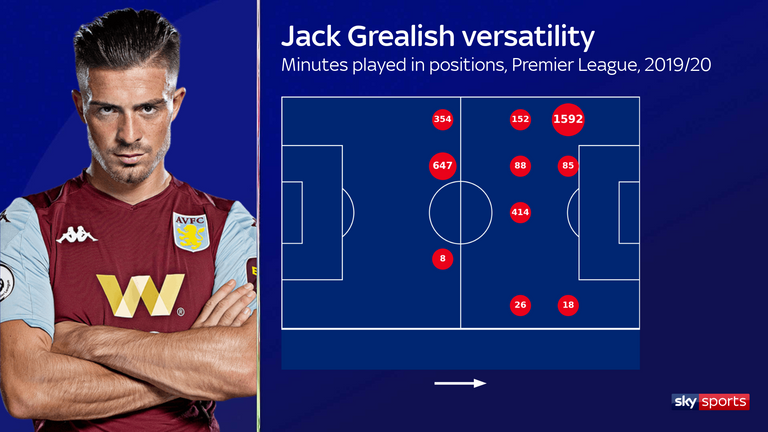 If Gareth Southgate wants to use him, pinning him to the left of a midfield three or at No 10 may not be advised, and that’s where Grealish’s inclusion gets tricky.

If England play 4-3-3, Raheem Sterling is cemented to the left of the three, Jadon Sancho to the right. If they play 4-2-3-1, the No 10 spot may be up for grabs. That’s likely to be the furthest forward Grealish could play, even if Southgate goes back to a five-man defence. 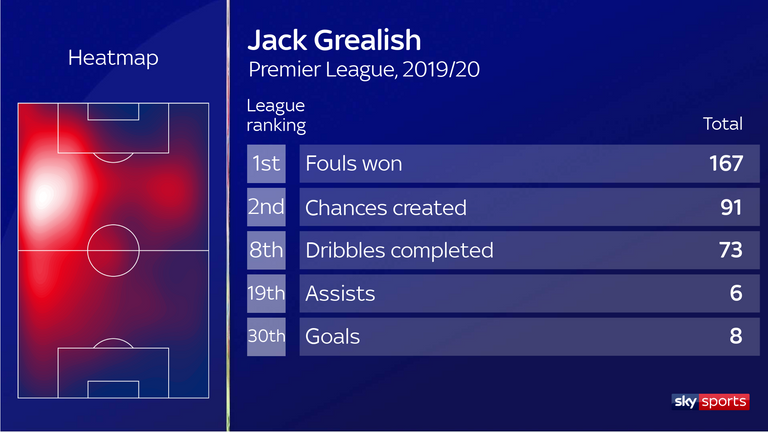 Southgate will want to pick a playmaker capable of doing it all with discipline. Though Grealish is defensively-minded – he can often be found tracking back before pulling Villa up the pitch 40 yards – his best work in the final third comes with freedom.

First call-ups for Greenwood and Foden? Among the Manchester United and Man City names, eyes will be peeled for the inclusions of Mason Greenwood and Phil Foden after their breakthrough seasons at their respective clubs.

Southgate will have to make a decision on whether to promote the youngsters to the senior squad and hand them their first call-ups or have them spend more time with the U21s. Greenwood has only played four times for the Young Lions and is still only 18.

But he made 31 Premier League appearances – 12 of those being starts – with 10 goals scored, half of which came after the restart. He also featured for United in their Europa League quarter-final and semi-final last week, playing 90 minutes in both, which will be a consideration for Southgate. 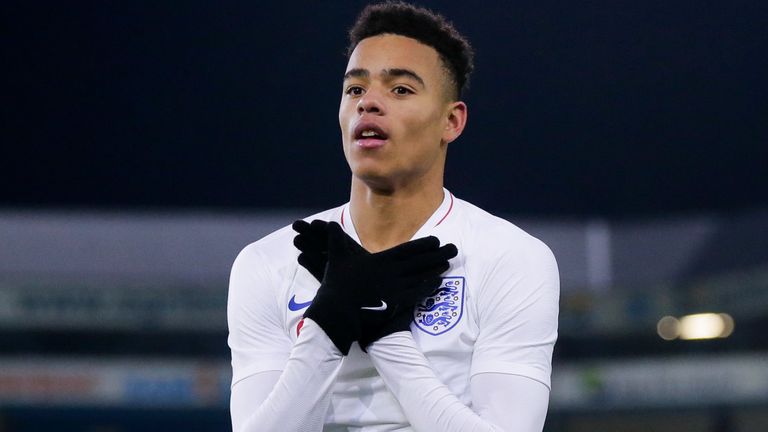 Foden continues to be nurtured under Pep Guardiola’s watchful eye and has more international experience under his belt. He was part of the U17 side that won the World Cup in 2017 as well as being a runner up in the U17 Euros.

He has 15 caps for the U21s so far but with slightly fewer Premier League appearances – 23 to be exact, including minutes in each of the last seven games – with five goals and two assists and after David Silva left the club at the end of the season, Foden is being primed as his replacement.

There is no doubting that both Foden and Greenwood have the talent and are the future for England. It is just deciding when they should make that leap and if they are prepared for all that comes with it.

What was England’s last squad and XI? 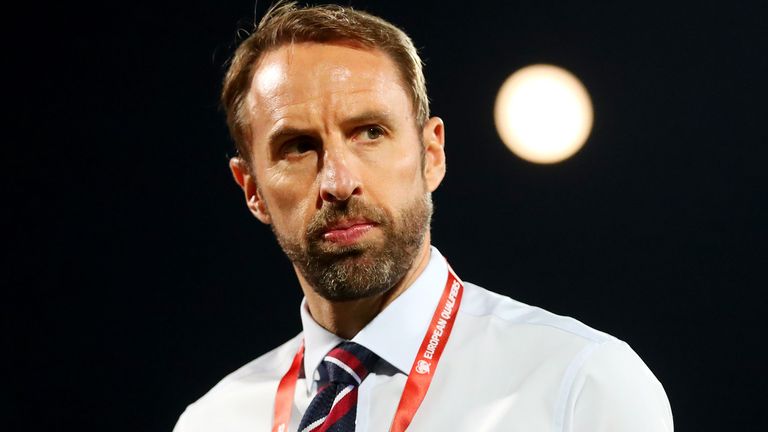 Southgate’s squad for Euro 2020 qualifiers with Kosovo and Montenegro in November 2019:

Power Rankings: Who is in England’s best XI?

Players from the Championship were excluded, but Ollie Watkins, Ebere Eze and Ben White – who has now returned to Brighton after a loan spell at Leeds – were in contention to make the grade. According to the rankings, Nick Pope edges Dean Henderson between the sticks, while Aaron Ramsdale, Alex McCarthy and Ben Foster all rank above the current England No 1, Jordan Pickford. There are few surprises across the back four, with full-backs Trent Alexander-Arnold and Ben Chilwell landing starting berths – but James Tarkowski partners regular centre-back Harry Maguire. Southgate has a wealth of options in midfield but the form trio would include Jack Grealish (uncapped), James Maddison (one cap) and James Ward-Prowse (two caps), who would be shoehorned into a central holding role.

All three pose a threat from set-pieces, while Ward-Prowse would controversially replace Liverpool captain and FWA Footballer of the Year winner Jordan Henderson – having covered a league-topping 442km during the campaign. 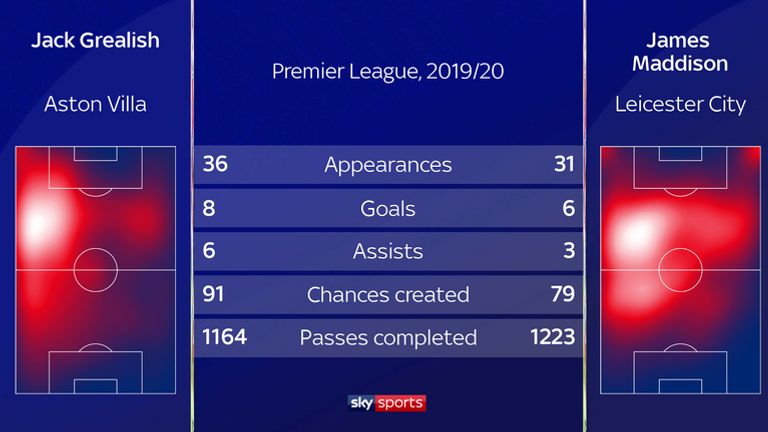 The uncontested wingers are Jadon Sancho and Raheem Sterling, with Marcus Rashford missing out on a start – but there is a seismic change up top: Harry Kane drops to the bench to make way for Danny Ings.