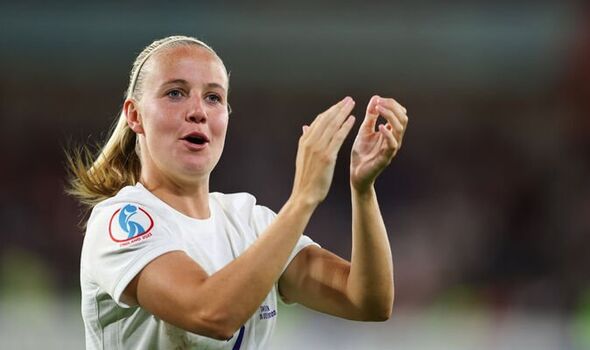 Arsenal forward Beth Mead is on target for the Golden Boot with England after taking her haul for the tournament to six with her strike in the 4-0 semi-final victory against Sweden on Tuesday night. It equalled the record for a Euros finals set by Germany’s Inka Grings in 2009.

Mead revealed the numbers she has registered never entered her head prior to the Euros.

“It’s a little bit surreal for me. It’s not something I ever thought about being even close to so I’m really happy to be where I am,” said the 27-year-old from Whitby.

“A lot of people have said to me that I needed to start believing in myself a little bit more. I’m trying to do that. It’s easier said than done but I know my ability as a player.

“In the past I’ve played as a No 9 so I know I can score goals. I’m just happy to be in the right place at the right time at the moment. The girls are playing amazingly and they are making it easy for me.

“I’m happy to be scoring goals and helping the team but it’s not something I’m too fussed about. I’m happier about us being in the final and winning with the team.”

Mead has blossomed under England manager Sarina Wiegman having been left out of last summer’s Team GB Olympic squad by Hege Riise. She has now scored 18 goals for England in Wiegman’s 19 games in charge.

None can have been as important as the shot on the turn which broke the semi-final deadlock at Bramall Lane.

“The goal came at a great time for us. It settled us. From then on I thought we had the momentum. It gave us a little bit more energy and I thought we dominated, bar a few chances for them in the second half,” she said.

“I think we went on and played some good football and scored some more goals.”

England have swept through the tournament, scoring 20 goals and conceding just one. The Lionesses are flying and as they look towards Wembley, Mead is convinced that this is their moment.

“We always knew we had the ability as footballers but I think the culture and belief is second to none now. We’d run through brick walls for each other. We really do feel that now,” said Mead.