Ellen White struck a hat-trick as England Women marked Hege Riise’s first game in temporary charge with a 6-0 demolition of Northern Ireland in a behind-closed-doors friendly at St George’s Park.

White struck twice in the first half in clinical fashion before completing her treble in the 48th minute, taking her international tally to 37 goals.

The Lionesses had not played since March last year after scheduled matches against Germany and Norway were cancelled due to the coronavirus pandemic.

READ MORE: ‘I can’t wait to put on an England shirt again’: A year without the Lionesses

England had two opportunities inside the first five minutes, with goalkeeper Becky Flaherty quick off her line to deny White the chance to get the shot away.

But White did not have to wait long for her first goal as, after being played in on the left, she took one touch before slotting the ball past the goalkeeper. 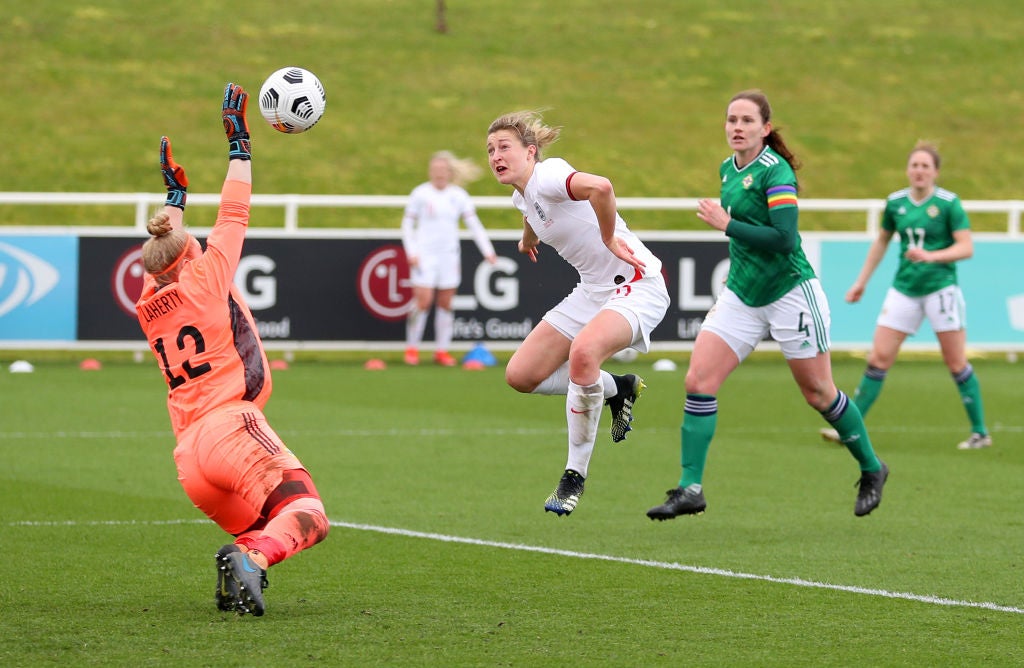 In the 23rd minute the Lionesses doubled their lead when White was played in expertly by Lucy Bronze who drove forward down the right before passing to the 31-year-old, who flicked the ball past Flaherty.

Bronze then found the net herself for England’s third when the visitors were caught trying to play out from the back, with Lauren Hemp regaining possession before finding Bronze who was able to poke home from a few yards out.

White had an opportunity to secure a first-half hat-trick in the 43rd minute after picking up a loose pass, but the Northern Ireland keeper was able to deny her.

On her 150th cap for her country, Jill Scott turned provider for White’s third, picking out the Manchester City forward with a well-weighted ball. White’s first touch took her away from the defender before she fired into the roof of the net.

The 34-year-old Scott made her debut against Holland in 2006 and only Fara Williams, who won 172 caps, has played more times for England.

The Lionesses netted their fifth in the 67th minute when Rachel Daly beat a defender before putting the ball in.

Ella Toone scored on her England debut, placing the ball into the bottom corner from the penalty spot after Chloe Kelly was brought down in the box.