Howe, who is understood to be considering a number of options as he prepares to return to football, met Celtic representatives, including majority shareholder Dermot Desmond, earlier this week in London.

The former Bournemouth manager is yet to decide if he wishes to move to Glasgow, but talks are believed to have gone smoothly, and Celtic are keen to make an appointment as soon as possible

Celtic’s hierarchy are believed to be impressed with Howe, and could propose a package that may tempt him back into management.

The Hoops have been linked with a number of high-profile candidates since Lennon left the club in February, with John Kennedy named interim manager in the meantime. Earlier on Thursday, Kennedy said he had been given no timescale for the arrival of a new manager or head coach.

Celtic are also looking to fill another vacancy within their football department in the coming weeks, after head of football operations Nick Hammond resigned on Wednesday.

The club is set for a summer overhaul at a number of levels; captain Scott Brown will leave for a player-coach role with Aberdeen at the end of the season, while chief executive Peter Lawwell will step down at the end of June, to be replaced by Dominic McKay, who arrives from the Scottish Rugby Union.

Lambert: You can’t get away with draws at Celtic

“I think whoever goes into Celtic has a big job on their hands. It’s a fantastic football club, it’s worldwide and has pressures with it.

“If Eddie does get the job, I think it’s a good fit. He will know he has to win games, you don’t get away with many draws.

“There are loads of candidates out there to get what is an incredible job, but whoever gets it knows they have to win every week.

“It wouldn’t matter that Howe isn’t a fan of the club; as long as Celtic fans see the team winning. You won’t get given a year or two of grace, you have to win, but that’s the nature of the club and that’s what makes it a special club. Anyone who has managed or played there will tell you the same.

“It doesn’t matter if Barcelona or Bayern Munich come to town, you have to win. But whoever gets it right there, will be in for a great, great time. If you finish second, it’s virtually last, and the Celtic fans will let you know.

“Howe’s pedigree gives him that chance with it.”

“The club have got to look forward and build, because Rangers are gathering momentum. They’ve been very good this season and Celtic have a huge challenge on their hands.

“It’s so important, the appointment they make. Looking at all the candidates that are there right now, Eddie Howe jumps out as the best one for it.

“I think he’s a very good coach, he has done really well at Bournemouth in keeping them in the Premier League.

“At this moment in time, with the list of names that are there, Eddie Howe would be the one for me.”

Howe in November: I won’t come back for the sake of it

➡️In November Eddie Howe was on Monday Night Football and revealed what would tempt him back into management. Celtic fans, would you like him to become the new boss at Parkhead? 👇 pic.twitter.com/pzM8p71gmn

“I wanted to be at home with my family, I wanted to see my kids grow up.

“I wanted to learn and develop my knowledge and abilities as a manager, and then if I decide down the line to get back in, or I am lucky enough to be given an opportunity, then I’ll do that.

“For me, I don’t want to get back in just for the sake of it, it would have to be something that really motivated me.”

The view from Scotland

Hamilton captain Brian Easton, who played under Eddie Howe at Burnley, believes the manager would cope with the Old Firm, saying: “If you are not brought up with it or not involved with it as a player or coach, I don’t think you can prepare yourself for it really.

“He was still pretty new to management, he hadn’t been in it too long when he came to Burnley but looking at his interviews and clips of him coaching, it doesn’t seem like he has changed much.

“He had a really good temperament. He wouldn’t lose the plot or anything like that but he wouldn’t mess about. If you needed that arm around the shoulder he would give it to you but he was always straight down the line.

“I think he backed it up with the way he coached. If he was telling you things weren’t good enough he would stay with you after training and work on a few things with you and he had a good coaching team behind him.

“So he is a hands-on coach and a good man-manager, I think he is very good.” 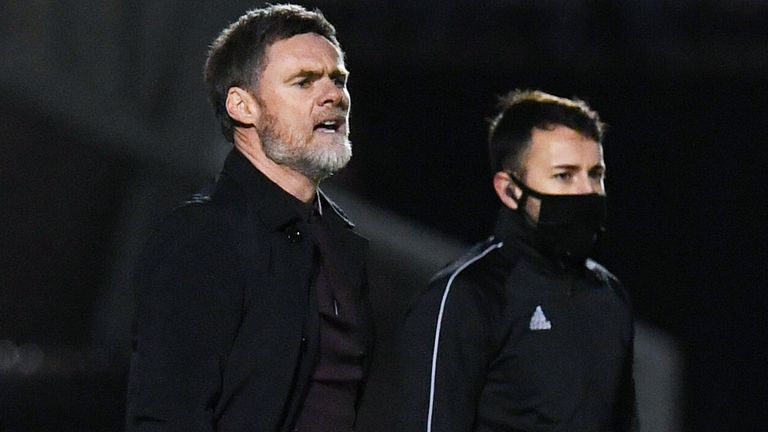 Eddie Howe ended Graham Alexander’s Burnley career but the Motherwell boss saw enough of him to know he would do a “fantastic job” at Celtic Park: “His reputation is not a false one, it’s built on results and success at different levels.

“But quality managers like him always adapt to the situation and find the best.

“He has worked with younger players in the past, I think he had to at Bournemouth in the early days, but he had good success with them and has kept that idea going.

“But his record is proven and he has worked at the top level in the Premier League in England, keeping Bournemouth up until last season.

“Whichever club employs him next, and he decides to go for, you pretty much know he is going to do an excellent job.

“But obviously the parameters at Celtic and Rangers are pretty extreme, so that’s a challenge for any manager that goes into one of those jobs.”

Analysis: What will the next Celtic boss need to do?

Whoever takes over from Neil Lennon in the East End of Glasgow will have to tackle a giant rebuilding job. But what issues are sure to be at the top of their in-tray?

From managing expectations to a mass recruitment project, Andy Walker and Kris Boyd give their take here

Will Robbie Neilson remain at Hearts after mounting pressure from fans? Rangers defender Nicola Docherty reveals what it is like being at the club and the message from Steven Gerrard to the women’s squad.

Celtic are on the agenda as they begin the defence of their Scottish Cup title.

Plus, could Scotland’s Kieran Tierney leave Arsenal for one of Europe’s elite clubs?