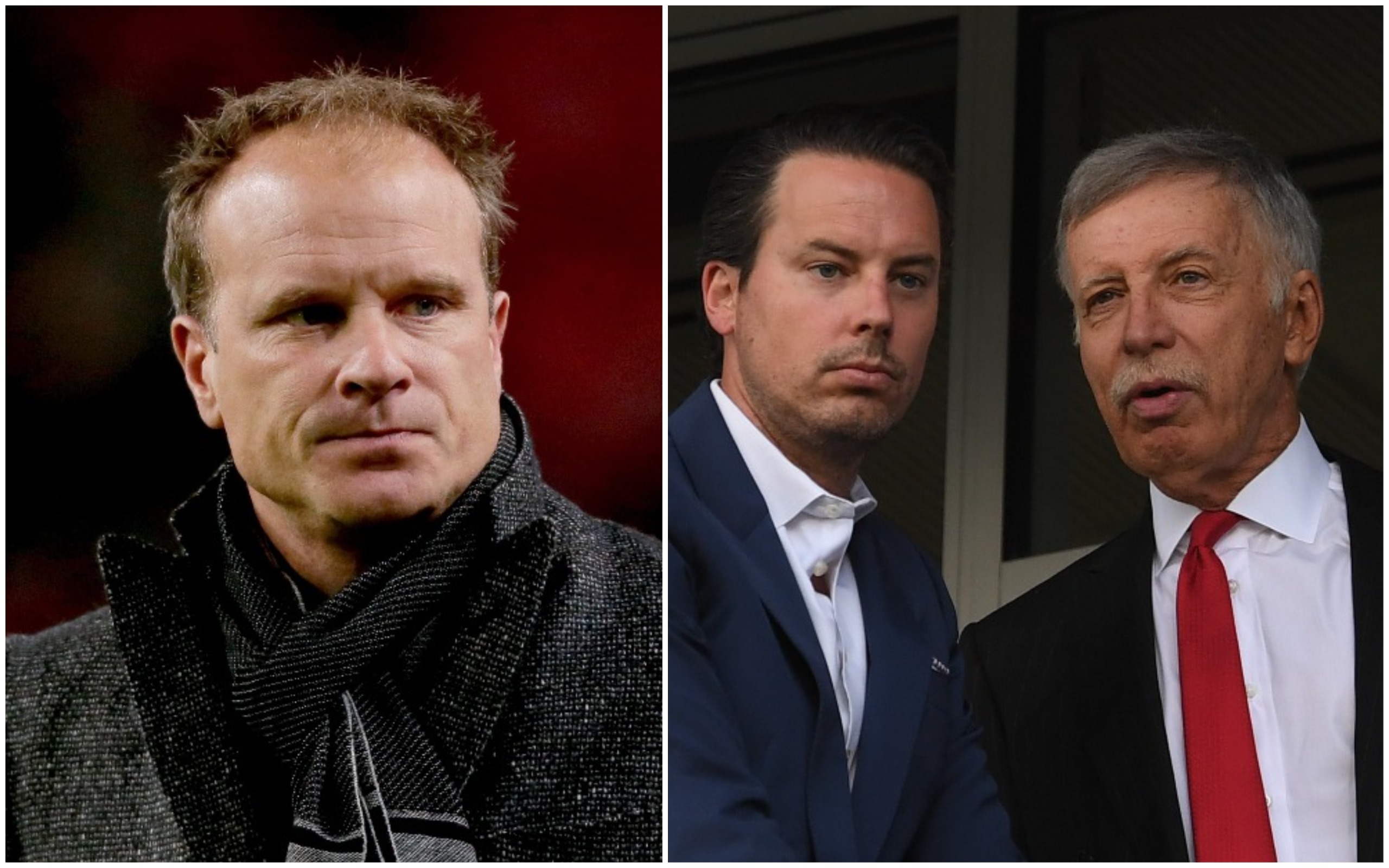 The Swedish billionaire, who co-founded Spotify, saw his £1.8bn offer to buy the club rejected by Arsenal’s hierarchy earlier this month.

Bergkamp, Thierry Henry and Patrick Vieira have already held talks with Ek over his plans to improve Arsenal if a takeover bid is successful.

But Bergkamp says he is keen to discuss the Arsenal’s current situation with Josh Kroenke, even if the club are unwilling to sell.

‘After I left the club I always kept in touch with Thierry and Patrick, and of course I continued to follow the games of Arsenal,’ Bergkamp said in an interview with VI.

‘I have played an important part of my career there, I have had a testimonial there. The club is in my heart, I have become a fan of the players.

‘Just like Patrick and Thierry, I recognise the Arsenal from our own time less and less. The ambition to win top prizes is in Arsenal’s DNA. Never accepting defeat. That mentality has slowly disappeared.

‘I sense resignation about the current situation. That is serious. As if, given the financial situation, it is normal for Arsenal to end in the middle bracket. That does not belong to this club. Arsenal’s DNA must be restored.

‘You have to start at the top. That’s why an acquisition is crucial. So that Arsenal can continue with an owner who understands that a football club should not be run like a company.

‘No matter how much money is involved in English football, Arsenal is and will remain a football club. Which must also be managed as such, in all layers of the club.

‘We can’t force anyone to sell. I understand that, in addition to that offer, Daniel has now reached out twice to Josh Kroenke and his bankers. Whatever Kroenke’s intentions are, it would be good if we at least have a conversation with each other. In the interest of the club.

‘Regardless, Daniel is not a quitter and neither are we football boys. We are here to stay. The crazy thing is that we cannot imagine how the current players feel. Because we have always played for the title ourselves.

‘We do know how the fans feel. We have already had a meeting with a supporter delegation. We also sense more and more enthusiasm on their side. That is very stimulating.’

Bergkamp has also assured Arsenal supporters that Ek’s desire to improve the club is genuine.

‘Daniel has been an Arsenal fan all his life. A real. He also appeared to be worried about the downturn at the club for some time.

‘When the Super League dominated the news for days, Daniel just about exploded. That was when he wanted to continue and contact us. During a Zoom meeting with Thierry, Patrick and I, he shared his concerns and plans with us. That made an impression from the first moment.

‘It immediately became clear to me how deep the supportership is with Daniel. I think that’s important… Daniel doesn’t see a takeover as buying a nice toy, on the contrary.

‘He understands the passion of a football fan. Because he is one himself. He also wants to significantly increase the influence of the fans. Among other things by giving them a place in the club management. We think that is very important.

‘We want to get close to the supporters. Daniel likes transparency anyway. Just look at how he communicates about this, via Twitter, clear to everyone. Another important point is that Daniel understands that Arsenal’s problems cannot be solved just like that.

‘Pumping in some extra money and firing the coach, for example, will not get you there.

‘If Arsenal wants to be at the top next season, they will have to reach a world top in every line. While the club has long lacked the appeal for this category of players. Hence, structural changes must take place. This is the backbone of Arsenal. This is a far-reaching, long-term project.’