Tottenham have told Dele Alli to fight for his place and are expected to resist a loan approach for him in the winter transfer window.

Paris Saint-Germain are interested in signing Alli following failed attempts to sign him on loan in the summer.

Reports on Sunday suggest Tottenham will grant a permanent move but would consider a six-month loan.

However, club sources have told Sky Sports News they do not want the midfielder to leave on loan.

Alli, 24, has scored two goals in his eight appearances this season but has not started a Premier League game since the home defeat to Everton on the opening weekend of the season.

His last top-flight appearance was as a substitute in the 6-1 win at Manchester United more than two months ago. 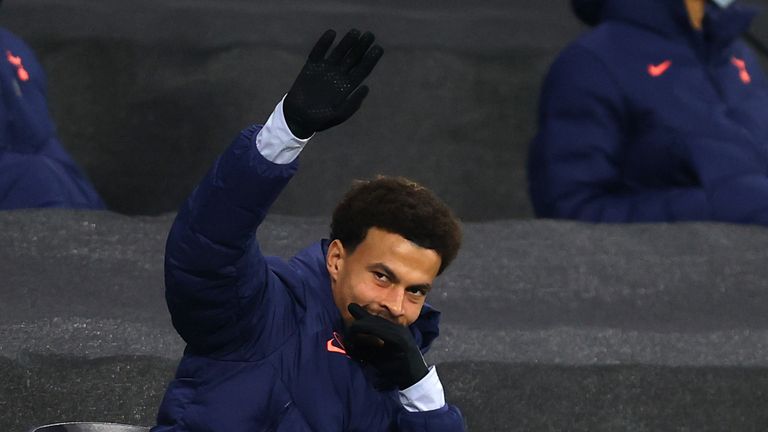 Alli was an unused substitute in Thursday’s 2-0 Europa League win over Royal Antwerp and briefly departed down the tunnel when it became apparent he was not going to get on the pitch before returning several minutes later towards the end of the game.

Afterwards Jose Mourinho was forced to defend his player’s action. “Let’s not run away from the reality, a player on the bench who realises with five changes he is not one of them, of course he is not a happy player and I wouldn’t expect him to be,” said the Spurs boss.

“But every player who is on the bench, or leaves the pitch in cold weather with me, they can go to the dressing room and I even prefer if that happened.”

Alli, who reached double figures for goals in his first three seasons in the Premier League following his move from MK Dons in 2015, is yet to make his position clear.

Crystal Palace vs Tottenham will be broadcast live on Sky Sports Premier League and Main Event from 2pm on Sunday; kick-off at 2.15pm. Sky Sports customers can watch in-game clips in the live match blog on the Sky Sports website and app. Free highlights will also be published on the Sky Sports digital platforms and the Sky Sports Football YouTube channel shortly after the final whistle.

Overall, Sky Sports will be showing at least 146 Premier League matches live throughout the 2020/21 season, continuing to bring you all the latest twists, turns and shocks at the home of the Premier League.

There will also be two additional midweek programmes – one will be played across the weeks commencing January 11 and 18 and the second will be in the week commencing May 10. All of these games will be broadcast live.