Leicester City went top of the Premier League with a tense 1-0 win over Wolverhampton Wanderers on Sunday in which striker Jamie Vardy scored one penalty and had another saved.

Elsewhere, Tottenham Hotspur striker Harry Kane chalked off yet another milestone as his 150th Premier League goal earned his side a 1-0 win at struggling West Bromwich Albion. 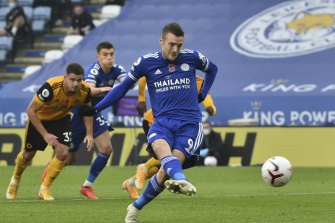 Jamie Vardy scores from the spot for Leicester.Credit:AP

Manchester City's Kevin De Bruyne, meanwhile, missed a potential match-winning penalty as Pep Guardiola's side were held to a 1-1 draw at home by Liverpool.

In Leicester, Vardy made no mistake with his first spot-kick in the 15th minute after Wolves were penalised for handball when Dennis Praet's cross hits Max Kilman's hand, the 33-year-old England international sending keeper Rui Patricio the wrong way.

He stepped up again six minutes before half-time when Rayan Ait Nouri brought down James Justin, but struck his kick straight down the middle and into the legs of the goalkeeper.

Marc Albrighton replaced Luke Thomas for Leicester at the break and almost made an immediate impact, but Youri Tielemans headed his ball into the box just wide, and the Belgian wasted another good chance as he blazed a shot over the bar. 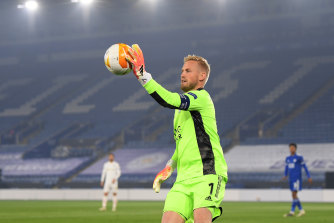 Kasper Schmeichel was again stellar between the sticks for the Foxes.Credit:Getty

Wolves swarmed forward looking for an equaliser and goalkeeper Kasper Schmeichel pulled off a stunning save to deny a Ruben Neves shot from the edge of the box, diving high to his left to keep the ball out.

"That's what you work on as a keeper, it's what I'm there for. The whole team defended brilliantly all game – they had one or two chances and that was it," Schmeichel told Sky Sports.

Leicester could have doubled their lead in the 82nd minute but Harvey Barnes blazed a deflected strike over the bar, and from the resulting corner Christian Fuchs hit a powerful shot that might have troubled the keeper had it not struck team mate Jonny Evans.

Leicester climbed to the top of the table with 18 points from eight games. 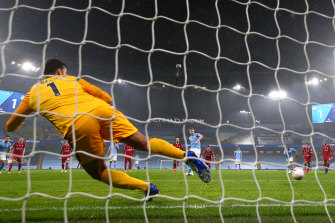 In Manchester, both goals, a Mohamed Salah spot-kick for Liverpool and a fine turn and finish from Gabriel Jesus for City, and the missed penalty came in a pulsating opening 45 minutes in which the last two league champions produced some exciting football.

Yet the quality and entertainment faded badly after the break.

Liverpool manager Juergen Klopp will be the happier with the result, given his side had lost their last three visits to the Etihad stadium in the league and they retain a five-point advantage over City.

Klopp answered the question of whether to replace Roberto Firmino with the in-form Diogo Jota by picking both players in a very attacking lineup and unsurprisingly his side began positively.

The visitors took the lead in the 13th minute when Sadio Mane turned sharply in the box and went down after contact from Kyle Walker and Salah converted the spot-kick.

An even better turn produced City's equaliser in the 31st minute when De Bruyne found Jesus in the box and the Brazilian's superb twist set him free of Trent Alexander-Arnold and earned him just enough space to poke past Alisson.

City then wasted an opportunity to take the lead, three minutes before the interval, when De Bruyne missed a penalty – awarded after his cross struck the arm of Joe Gomez and referee Craig Pawson gave the spot-kick after checking the pitchside monitor.

Yet the excitement of the opening 45 minutes was not replicated after the break as City gained greater control but struggled to create real openings.

Ederson did well to save from Diogo Jota at the near post and at the other end Jesus was off-target after being found unmarked in the box by Joao Cancelo. 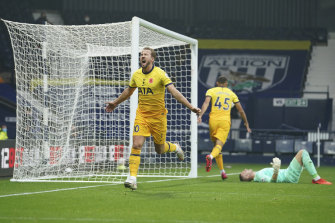 Harry Kane does it again for Spurs.Credit:AP

Liverpool are third on 17 points after eight games with 11th-placed City on 12, having played a game fewer.

Tottenham Hotspur striker Harry Kane chalked off yet another milestone as his 150th Premier League goal earned his side a 1-0 win at struggling West Bromwich Albion on Sunday.

It looked as though West Brom had successfully stifled Tottenham's formidable front trio of Kane, Gareth Bale and Son Heung-min, starting together in the league for the first time, but Kane headed home in the 88th minute.

"West Brom's performance made us play in the way we did. They were very good defensively. We played safe," Spurs manager Jose Mourinho said.

Kane, like Son and Bale, was a subdued figure on Sunday as a resolute West Brom defended deeply, but he capitalised on a moment of indecision by home keeper Sam Johnstone to glance in Matt Doherty's flighted ball into the danger area.

The England striker scored his 200th Tottenham goal in midweek in the Europa League win over Ludogorets and now has 13 goals and 10 assists in 14 matches in all competitions for his club this season.

It had taken a sluggish Tottenham almost an hour to have an effort on target, although Son did have a golden early opportunity but took too long and his shot was blocked.

West Brom had chances too.

Karlan Grant headed Darnell Furlong's superb cross wide in the first half while Dara O'Shea missed the target with a header.

Tottenham began to ramp up the pressure as the second half progressed and finally began to test Johnstone.

Sergio Reguilon warmed his gloves from long range, Bale could not connect with a dangerous Kane cross and substitute Giovani Lo Celso scuffed a shot wide.

Carlos Vinicius came off the bench for his Premier League debut and the Brazilian almost squeezed a shot inside the post, only for Johnstone to make a scrambling save.

West Brom appeared to have resisted the Spurs surge but Kane popped up to continue Tottenham's 100 per cent record on the road this season and spark loud celebrations on their bench.

Kane's 150 came up in his 218th Premier League appearance with only Alan Shearer (212) and Sergio Aguero (217) reaching that total in less games.