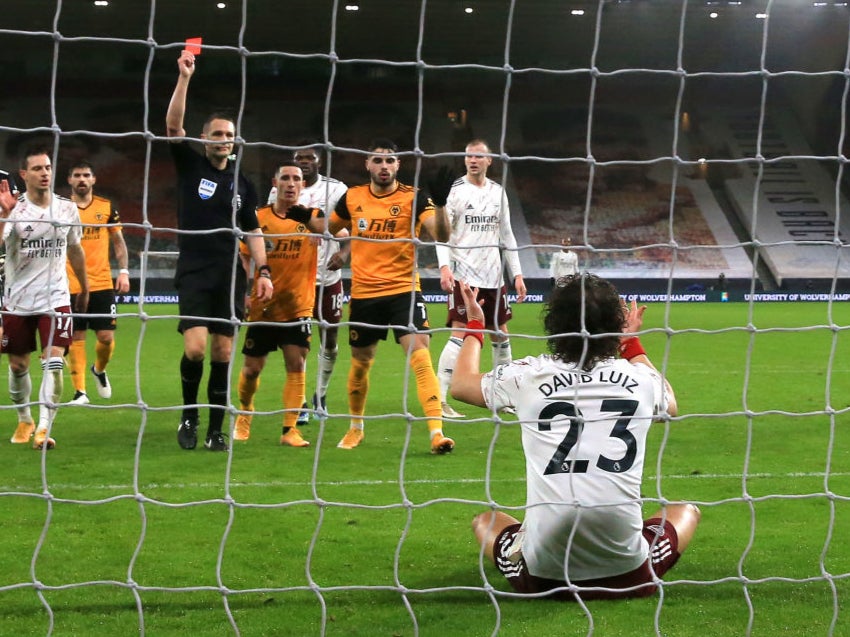 Yet if Bernd Leno was far more culpable for his subsequent red card, David Luiz’s dismissal was the turning point. Early exits are an unfortunate habit. His three Arsenal red cards have come after 26, 25 and 45 minutes on the pitch.

There are days when he feels the personification of them: prone to pratfalls, capable of injecting the wrong sort of drama, the unwanted antidote to the sort of consistency Arteta had been imbuing. It is part of a persona, very David Luiz to be sent off even when he might not deserve to be, but to cost his side in the process.

It adds to the case that Arsenal’s most experienced centre-back is also their most unreliable one. Arteta spent January discarding ageing and erratic defenders. Goodbye, Shkodran Mustafi.

Farewell, Sokratis Papastathopoulos. So long, Saed Kolasinac. David Luiz was the exception to the rule but, with his contract expiring in the summer, a decision beckons about a player who turns 34 in April.

Eight centre-backs – and who else had eight to begin with? – may become five. David Luiz’s less gifted sidekick Rob Holding offers more solidity. His replacement – or Alexandre Lacazette’s when he had to make way – Gabriel showed his precocity in the first half of the season. Pablo Mari had been in fine form before he was injured. William Saliba cost a lot, played little and has been loaned out but, at £25 million, ought to represent some sort of future. Calum Chambers may be a back-up, but he is a versatile one. 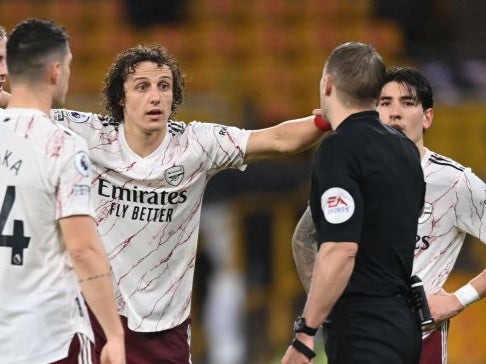 David Luiz’s last contract came a week after his previous dismissal. The temptation was to frame it as a curious reward when the reality of an extended season meant Arsenal had to act, one way or another. Now his punishment ought to enable Gabriel to return to the starting 11 at Aston Villa on Saturday

He is the master of wildly contrasting fortunes within a few days. He had been man of the match against Manchester United 72 hours earlier. When he trudged off, before Ruben Neves converted the resulting penalty, Arsenal had only conceded one goal in his last 570 minutes on the pitch. He was a cornerstone of statistically the second best defence in the Premier League. Hence the conundrum of David Luiz, the sinner who may have been sinned against on this occasion. “Unbelievable,” he raged on Instagram. But, as it was David Luiz, rather believable, too.