Danny Ings has been the star player for Southampton under Ralph Hasenhuttl so there is understandable concern right now. The news that the striker will be out for up to six weeks as a result of a knee injury picked up late on against Aston Villa presents a problem.

“This is not good news for us,” said Hasenhuttl, before stressing there is far more to his Southampton team than their top scorer.

The onus is on others to find a way without him. Much will depend on whether Che Adams can carry the burden up front.

The man signed for £15m from Birmingham in the summer of 2019 had to wait more than a year for his first Southampton goal – that spectacular 40-yard strike against Manchester City – but this is an opportunity for him to repay the faith shown in him by his manager. In truth, Adams has already shown why he was wanted in the first place. Ings’ injury not only deprives Saints of their talisman but it breaks up one of the more effective partnerships in the Premier League. In fact, only the celebrated Tottenham pairing of Heung-Min Son and Harry Kane have combined for more goals in the competition this season.

Adams has been a key factor with his off-the-ball work, both dropping deep and stretching defences in behind. He has been the ideal foil – providing Ings with two notable assists in recent weeks.

The first goal in the comeback draw against Chelsea highlighted his strengths, racing back to bundle Kai Havertz off the ball in midfield before delivering an expertly weighted pass through for Ings to round the goalkeeper and score. Any playmaker would have been proud. It was an example of the quality that Adams has added to his game. There is no denying that it has taken time. But it is a product of the work that has been put in on the training ground.

Speaking to Hasenhuttl in the summer, this was something he referenced, particularly in regard to Adams. They are the extra bits that are required to succeed at the highest level.

“It is a lot of videos,” Hasenhuttl told Sky Sports.

“Showing them all the time. Telling them not to save this run. Telling them this is where they have to be. These are things we are doing now all the time with Che, showing him that he must come to the position where Danny is and then he will score more.

“In the Premier League, you do not have the time to turn and play through two players to score. You must run before the ball comes. Then you will have a chance to score.” The perfect illustration of this came in the opening minutes of the 2-0 victory over Burnley in September. Kyle Walker-Peters had time with the ball at his feet and that was enough to trigger Adams into making a run in behind the opposition defence, latching onto the pass.

The vision that Adams then showed in cutting the ball back to find Ings was unusual. It would have been easy to go for the shot himself, albeit from an acute angle. That he looked to his team-mate was a further indication of the understanding between the two players.

Perhaps it is too much to expect a similar relationship with Shane Long or Michael Obafemi. It could be Hasenhuttl tweaks things to deploy Theo Walcott in an advanced role instead.

What is clear is whoever comes into the Southampton team there will now be a greater onus on Adams to take the scoring responsibility himself in the absence of a player who only missed out on the Premier League golden boot by a single goal last season. 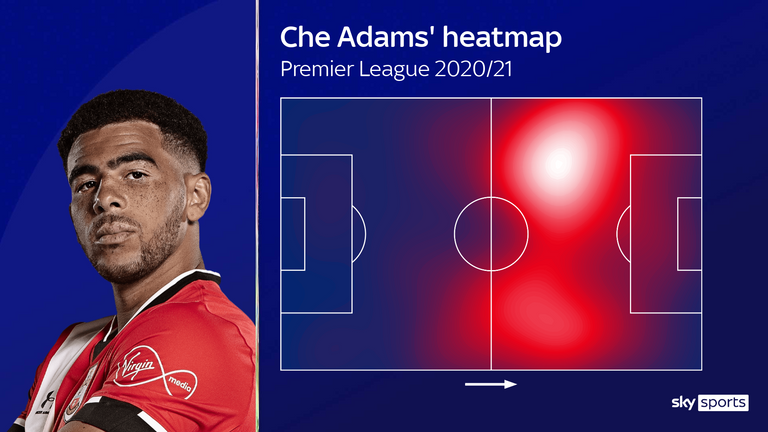 His record without Ings so far reveals he has scored one goal in the 365 minutes of Premier League football that he has played without his partner on the pitch. That was the late second after coming on as a substitute in the 2-0 win at Bournemouth in July.

Adams’ record with Ings on the pitch shows that he has scored five goals in 1331 minutes at a rate of on every 266 minutes – significantly better. Thanks in part to the fact that it has, on occasion, been Ings supplying him – such as the cross for the second goal against Everton.

The good news for Southampton is that Adams’ scoring form is trending in the right direction, so perhaps those statistics are skewed by the fact that many of those minutes without Ings came in the early part of last season when he was still adapting to the level.

Adams has not always taken his chances but, increasingly, he is in position to do so. His instincts are improving. Finishing streaks come and go but the correlation between the number of chances and the number of goals is strong. The signs are positive.

Perhaps that improvement is to be expected given Adams did not work within an academy setup between the ages of 14 and 18. He took a different route and even at 24 he is still learning.

Hasenhuttl enjoys honing young talent, working on those subtleties, and as one of only two Premier League managers to have been a striker himself, he has an affinity for attackers.

If Adams can continue to improve and provide the cover required while Ings is unavailable, this is a chance for Southampton. Win against Newcastle on Friday and Hasenhuttl’s team will even go to the top of the table for the first time in Premier League history.

Che Adams has already shown that he can form a successful partnership with Danny Ings. The job now is to show that he – and Southampton – can function just as well without him.