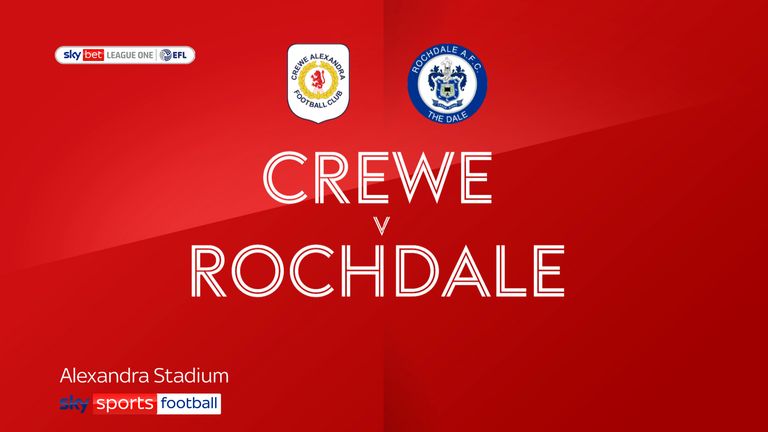 Rochdale remain deep in relegation trouble despite Matty Done’s stoppage-time equaliser which rescued a point from a 1-1 draw at Crewe.

Dale fell behind when Charlie Kirk followed up his last-minute penalty, which was saved by Jay Lynch, to put Crewe ahead.

While the point was salvaged with Done’s finish in the sixth minute of added time, Rochdale’s run of three consecutive wins came to an end and they are left five points adrift of safety.

Veteran Dale defender Paul McShane was fortunate not to be punished for a sloppy clearing header, which dropped for Kirk who failed to trouble Jay Lynch.

Jimmy Keohane may have done better when his header cleared the Crewe bar.

Will Jaaskelainen kept out Ryan McLaughlin’s driven cross-shot and Jake Beesley had an effort blocked from a tight angle.

Eoghan O’Connell’s thumping header was straight at the keeper as a clinical edge eluded Rochdale.

Keeper Lynch kept them on terms, tipping over a powerful 25-yard drive from Antony Evans and using his feet to save from Kirk at the foot of his near post.

He also kept out Kirk’s spot kick, awarded after Morley tripped the penalty-taker, but the attacker followed up to finish before substitute Done broke clear on the left and finished into the far corner past Jaaskelainen.