Tottenham’s clash with Fulham is the third Premier League game this season to be postponed because of coronavirus, with Aston Villa’s match with Newcastle earlier in December and Man City’s trip to Everton on Monday also set to be rearranged.

However, these fixtures aren’t the only ones that have been affected by the virus – there have been positive results returned in every round of testing in the Premier League this season, including a new high of 18 in the latest batch between December 21 and 27.

While there is confidentiality around who these positive tests are from – and they include staff as well as players – there have been instances where clubs have had to cope without isolating players in matches this season.

So what leads to a match being postponed? When will these rearranged games take place? And how prevalent is coronavirus within the world of football right now?

Here’s what we know…

How prevalent is coronavirus in the Premier League right now?

On Tuesday, the Premier League announced 18 positive results from 1,479 tests during the week of December 21-27. That’s the highest number of positives returned in a week during this Premier League season, topping the 16 returned during a week in November and a rise on the seven positives that were recorded between December 14-20.

While the Premier League does not disclose details of the clubs or individuals affected by the latest positive results, we know they apply to players and club staff, who will now be isolating for 10 days.

In recent days we’ve learnt that Arsenal centre-back Gabriel is isolating after testing positive, Southampton boss Ralph Hassenhuttl had to miss his side’s draw with West Ham after a member of his household tested positive, Sheffield United fulfilled their match with Burnley despite staff impacted, while on Christmas Day Manchester City announced Gabriel Jesus and Kyle Walker, plus two members of club staff, had tested positive.

Further positive results within the City camp on Monday led to their Premier League match with Everton later that day being postponed. City’s first-team training ground is now closed while it undergoes a deep clean.

Tottenham’s match with Fulham has now become the third Premier League game this season to be postponed, after Fulham returned a number of positive results, but there has been even more significant disruption to the schedule in the EFL.

On Tuesday the EFL confirmed 43 games in the Championship, League One, and League Two had been affected by coronavirus.

What is the criteria for a postponement? 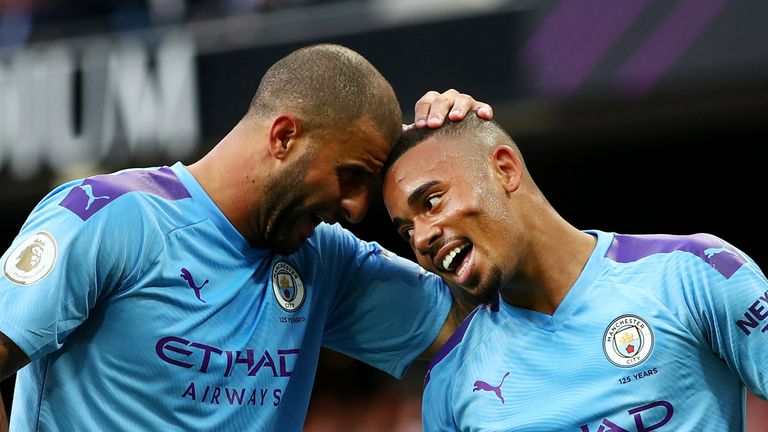 The Premier League Board ultimately decides whether matches can or can’t be postponed. While there aren’t hard and fast rules – each game is judged on a case-by-case basis – there are some guidelines.

For instance, in the 2020/21 Premier League handbook, clubs have been told “permission will not be granted to postpone a league match where the applicant club has 14 or more players listed on its squad list available.”

Teams were permitted earlier this season to name 25 players in their Premier League squad list – and that doesn’t include registered U21 players.

However, City may not even have had to drop below that 14-player level for their match with Everton to be postponed. The Premier League Board have said they took medical advice into consideration when deciding to call off that fixture, and there may have been other factors affecting their decision.

However, what we do know is that the Premier League Board only rearrange games in “exceptional circumstances”. With City’s training ground closed, their trip to Chelsea on Sunday could also be under threat of postponement.

But what about their Carabao Cup semi-final at Manchester United on Wednesday, January 6?

Earlier this season, Tottenham were given a bye past Leyton Orient, after the League Two side returned positive tests ahead of their third-round tie. After an initial postponement – and with the fourth round fixtures due to be played the following week – the EFL confirmed Orient had forfeited the game.

Carabao Cup rules state that forfeits only apply in the first four rounds of the competition and that from the quarter-finals onwards a rearranged date would be looked for. With the final moved to April 25, there should be time in the calendar for United and City to face off, should next Wednesday’s tie need to be pushed back.

However, it also raises an intriguing scenario with the FA Cup third round getting underway in January. In October, Notts County were hit by coronavirus and had to forfeit their qualifying tie with Kings Lynn Town, who had a bye into the first round proper. We’re awaiting an update from the FA on the implications for the next round of the competition.

When are these games postponed until?

This is a key question for clubs and the Premier League.

The 2020/21 season is already condensed, due to the late finish of the 2019/20 season and the knock-on impact that had on this campaign not starting until September 12, so finding space to play called-off games won’t be easy.

Currently, the Premier League season is due to finish on May 23, 2021, a week after the FA Cup final on May 15. The Champions League final then comes on May 29.

However, there is little room to alter those dates, as the European Championships – already pushed back from the summer of 2020 – kicks off on June 11, just 13 days after the Champions League final.

So rather than look to extend the season, authorities and clubs will most likely have to look for midweek slots to play postponed games.

Could there be a two-week break from football to stop the spread?

With coronavirus cases widely on the rise across the country, there has been suggestions football could take a two-week break to stop the spread of the virus within the game.

While it is a plan favoured by West Brom boss Sam Allardyce, Manchester United manager Ole Gunnar Solskjaer had said he would be against the pause. “I can’t see the benefit in having a circuit break, whatever it’s going to be called,” he said on Tuesday. “When are we going to play the games? We all know this year is so difficult, but I don’t think stopping the games is going to make a big, big change.”

Can we please get this two week circuit breaker thing off the table . The players would have to carry on mixing and training to be ready in 2 weeks for a match. They may get 4-5 days off. What is that going to do . Would have to be a long break to do anything meaningful!

And late on Wednesday night, the league itself confirmed:

‘The Premier League has not discussed pausing the season and has no plans to do so.

‘The League continues to have confidence in its COVID-19 protocols to enable fixtures to be played as scheduled, and these protocols continue to have the full backing of Government.

‘With the health of players and staff the priority, the League is also fully supportive of how clubs are implementing the protocols and rules.’

The EFL confirmed on Tuesday morning that the total number of games affected so far by Covid-19 related issues was 44 – one in the Carabao Cup and 43 in the Championship, League One and League Two.