Maclaren shared the top scorer award with Besart Berisha earlier in his career when he was at Brisbane Roar, but is the undisputed No.1 this season with 22 goals, two clear of Sydney's Adam Le Fondre and three ahead of Western United's Berisha. 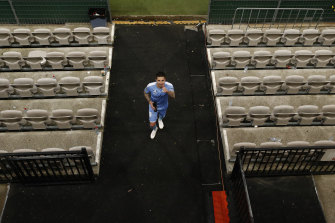 But the City striker says the focus now is on winning the title – to make the sacrifice of spending nearly two months in a Sydney hub away from family and friends worthwhile for all of City's players and staff.

He also wants to be part of City's first ever title-winning team and to reward missing captain Scott Jamieson for the leadership he has shown by opting not to rejoin his teammates in NSW but to remain in Melbourne with partner Vicky after the birth of the couple's first child last week.

"It's a nice feeling. I pride myself on scoring goals. It would definitely be up there [as a career high]. We can proudly say that we are the team that finished with the highest ever points tally in Melbourne City's history so that's something else we can hang our hats on."

But winning the title would easily top that. 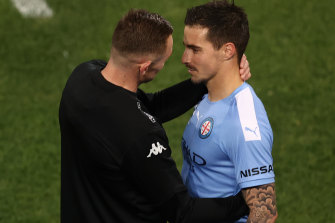 "Going into a semi-final we are full of confidence. If there is ever a year that City can do it it is right now because we are playing some really good stuff and the confidence throughout the group and the staff is fantastic. There's a great vibe at the moment.

"I am as hungry as ever to gain team success," said Maclaren, who has not won a trophy since his days in the under-15s squad at Green Gully in his native Victoria.

"This is a team sport, it's a collective. This game is not for individuals … my teammates have helped me get to where I am [and] we are building someting very nice at this club."

Jamieson's leadership was being felt even from interstate, he said.

'I think I miss him, I'm not sure 22 other boys miss him," he said with a smile as he reflected on the City captain's ebullient character.

"We are so happy for him and Vic, having a baby is a huge thing. When he sent us a message he was not returning in no way was any player begrudging that.

"He's driving us every single day, just what a great captain does. We will be doing it for him and his family, for all of our families. We are not here to make up the numbers or go through the motions."

Maclaren has never played in a grand final and the closest he has come was as part of the Brisbane team that surrendered a three-goal advantage to lose a semi-final 5-4 after extra time against Western Sydney in 2016. Maclaren scored twice in that game but he would happily have exchanged his goals for a place in the championship decider.

"That still bites me today. I will be pushing really hard for a finals spot. We laid down a marker against Sydney.

"I believe moving forward we are in a great place. We have players who come on as subs and they are buzzing to get on the field. We have a great group … if there is ever a time that City can win it it is this period."