While the majority of A-League clubs have moved swiftly to stand down staff and players to cut costs during the coronavirus crisis, the two big Melbourne teams, Victory and City, are keeping their players on the payroll for now.

Victory's players came out of self-isolation on Monday afternoon having had to go into personal lock-down for 14 days on March 16, when they arrived back in Australia having played against Wellington Phoenix on the previous day, Sunday March 15.

Because of the shock move by the Federal government that Sunday afternoon to enforce strict quarantine procedures from midnight that night Victory could not get back from New Zealand in time before the deadline expired, meaning the players had to self-isolate. 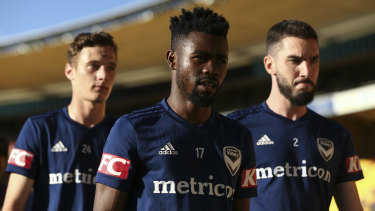 Melbourne Victory players after the match in Wellington.Credit:Getty Images

They are still staying away from the club, but have been given individual training schedules to pursue while at home.

Victory is one of the richest of the A-League clubs and is one of few to regularly break even or turn a profit, so it may be in a better situation than many of their rivals who are scrambling to trim expenses in these turbulent times.

There is no A-League club better resourced than Melbourne City, however, as it is owned by one of the richest organisations in world soccer, the City Football Group, controlled by the UAE-based Abu Dhabi United Group which in turn is owned by Sheikh Mansour bin Zayed al Nahayan, a member of the Abu Dhabi Royal Family and the country's minister of presidential affairs.

City players – who figured in what could have been the last A-League match of the season in Newcastle on Monday March 23 – have not been laid off.

''Our players have been told to stay at home, observe the protocols and have been given individually tailored training programmes to keep fit during this period,'' a spokesman said.

The FFA had said last month that they would review whether the league would continue or not on April 22, so City and Victory are using that as a target date. However, few in the game expect any football to be given the go ahead at that point.

Western United, the other Victorian club, is considering its position and has not stood down its players yet although there has been speculation that the league's newest club might take such action.

Perth Glory, Central Coast and Western Sydney Wanderers have already stood down players and staff, while Adelaide, Newcastle and Brisbane Roar are other clubs reportedly on the verge of doing so.

The unilateral response has prompted an angry reaction from the players union the Professional Footballers Association, whose boss John Didulica has slammed the clubs and the way they have reacted, saying they should take a leaf out of the play-books used by the AFL and NRL who dealt in a consensual manner.

“Whether it is one club or all 11 clubs, our position on this will not change. We will continue to fight for the players who have been dumped and preserve their legal rights, including challenging the stand down notices and, where instructed, seek free agency on the basis of this breach of contract, '' Didulica says.

“We have significant concerns about the impact the decisions of club owners are having on the wellbeing of our members, many of whom now face long term unemployment.

“It is entirely unnecessary for club owners to place their players in this situation when there is an alternative option – which is for the sport to work together – as we’ve seen across other mature and sophisticated sports.

'"Actions not anchored in finding common solutions can only hurt. Short-term opportunism is coming at the expense of leadership and the long-term thinking that is now necessary."