Chelsea left with the pure joy of lifting club football’s greatest trophy in front of their fans, Manchester City left to think about where it was lost.

That was also the story running through this 66th Champions League final, as the London club claimed their second and Thomas Tuchel his first with this resolute 1-0 win. The wait for City’s first and Pep Guardiola’s third goes on because the manager once again over-thought it on the biggest stage of all. He once again contrived to reduce his team’s chances of winning. The starting line-up was the start of everything going wrong, right down to Kevin De Bruyne’s sad injury. Before then, though, Guardiola’s needlessly complex system was undone by Tuchel’s more direct approach and one simple – but sensational – Mason Mount ball. There is almost an element of Greek tragedy to it for Guardiola by now, as one of Chelsea’s marquee German signings won the game.

So many overwrought instructions seemed all the more needless as the brilliant Kai Havertz just slid the ball into an open goal. It had come through exactly the area that City would usually have had a defensive midfielder patrolling. Guardiola had remarkably gone without one, in what looked a needlessly convoluted approach.

You would call it baffling except this is now as much a part of Guardiola’s Champions League lore as the 2011 performance with Barcelona.

He still hasn’t won one since, and given that Abu Dhabi ultimately structured this political project specifically for the Catalan, there is an inevitable feeling it is overdue. He was instead beaten by a Chelsea team who Tuchel has ensured are well ahead of schedule.

They may not be as developed as City for the long course of a league season, but the difference here was that they just understood their approach better. It was so much easier to grasp. You could see precisely what Tuchel wanted to do. This was brilliant management from the German after just a few months in this job, and brought out some timelessly good defending from his players – the time of resolve and defiance that only comes in games like this as the height of the stage lifts the level. Chelsea’s appointment has been vindicated with the ultimate victory.

You couldn’t say any of that about Guardiola’s approach. It seemed as if many of the players didn’t know what they were supposed to be doing either.

Very early on in the game, Sterling turned to Oleksandr Zinchenko and gave him a bit of a talking-to – evidently about his position. One of a few problems for City at that point, though, was that Zinchenko seemed to be expected to play about four different positions. More than anything, though, it felt like the young full-back was expected to step in as defensive midfielder in the absence of a proper one starting.

The line-up stunned people at the stadium before the game, but there was at least some method to Guardiola’s manic intensity. You could kind of understand the logic, even if it came from the manager’s very distinctive plane of thinking. He evidently wanted City’s players to move at such a speed, and circulate position so much, that it would just disorientate Chelsea. It seemed to only have that effect on Guardiola’s own players.

While there were flashes of it working – like when De Bruyne and Phil Foden almost got in – there were more instances of players just not being in the right place at a key time.

That was most clearly the case with Havertz’s goal, but Chelsea had been getting in behind so easily long before then. Timo Werner should have opened the scoring with that ludicrous fresh-air finish but one of the hallmarks of the German’s season has been how he keeps going despite so many knock-backs, how he keeps running. That was a key factor in the goal.

It was Werner’s run that took Ruben Dias out of position, creating one of many stunningly wide gaps that Chelsea just exploited. The biggest was exactly where a defensive midfielder was supposed to be – or maybe Zinchenko, or whichever player Guardiola had instructed to drop into the position. Either way, it was as confusing as it was inexplicable. It was also costly. 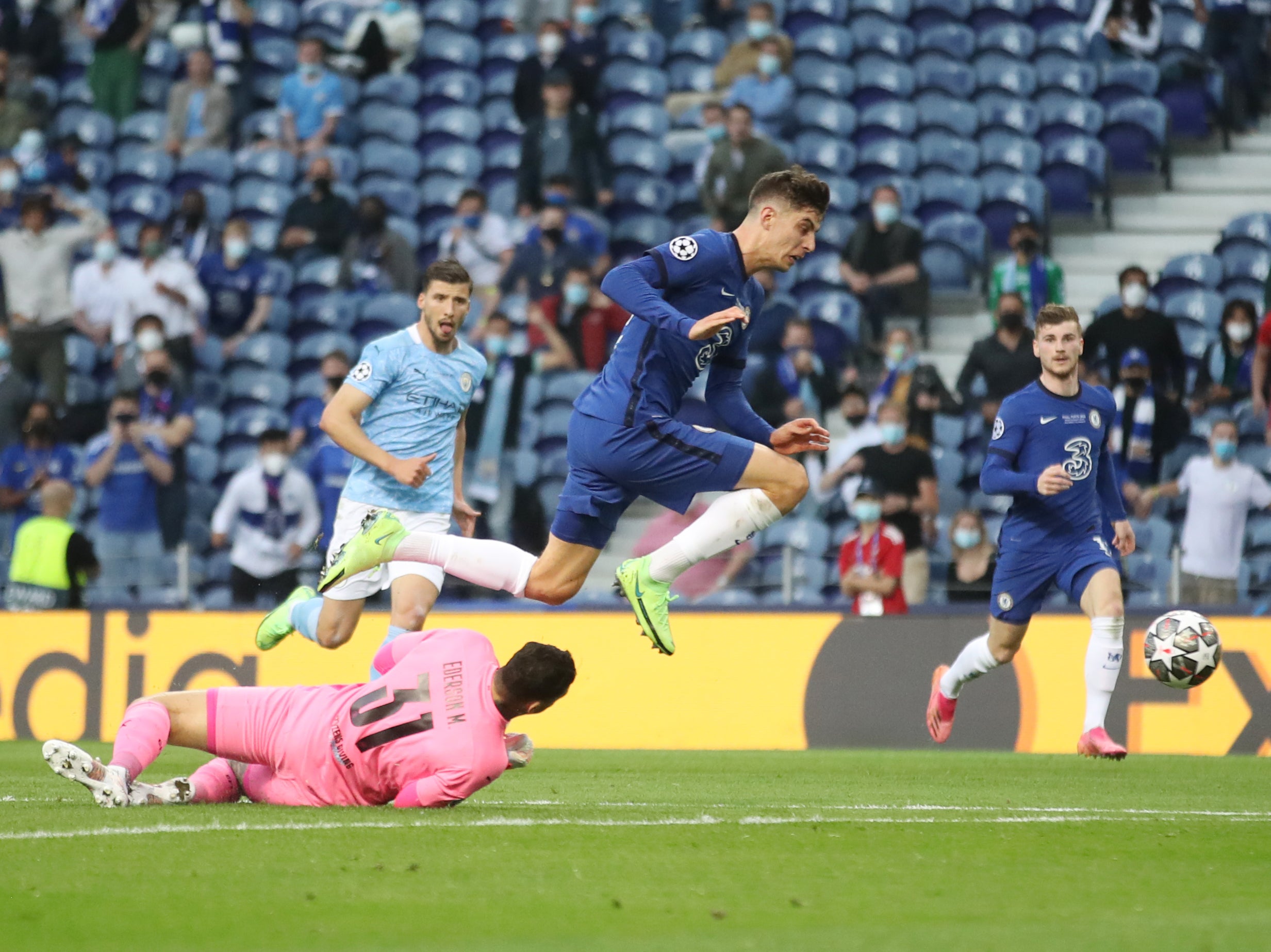 Kai Havertz scored the only goal of the game

Mount still had to pick a pass, though, and what a pass it was. The weight of it was just perfect. A rousing, raking through ball put Havertz clear on goal, in the manner Chelsea had been threatening all game. Ederson handled it as the German went around him outside the box, but Havertz enjoyed the finest advantage possible as he put it into the net.

It was his first ever goal in the Champions League. What a time to get it.

Havertz didn’t just settle the game. He often ran it. It was his fine work that set up Christian Pulisic for the chance that should really have sealed the victory. As it was, Chelsea needed to fight more.

Havertz had been one of many Chelsea players – along with the peerless N’Golo Kante, Antonio Rudiger, Reece James and Cesar Azpilicueta – also showing real ferocity.

There was that assertiveness to every challenge, that focus in a way only a fixture like this can bring out. City might have understandably felt it went beyond that a few times – particularly for the second key moment of the game. Rudiger was only booked for a should charge on De Bruyne, that forced the playmaker off with a swollen cheekbone. 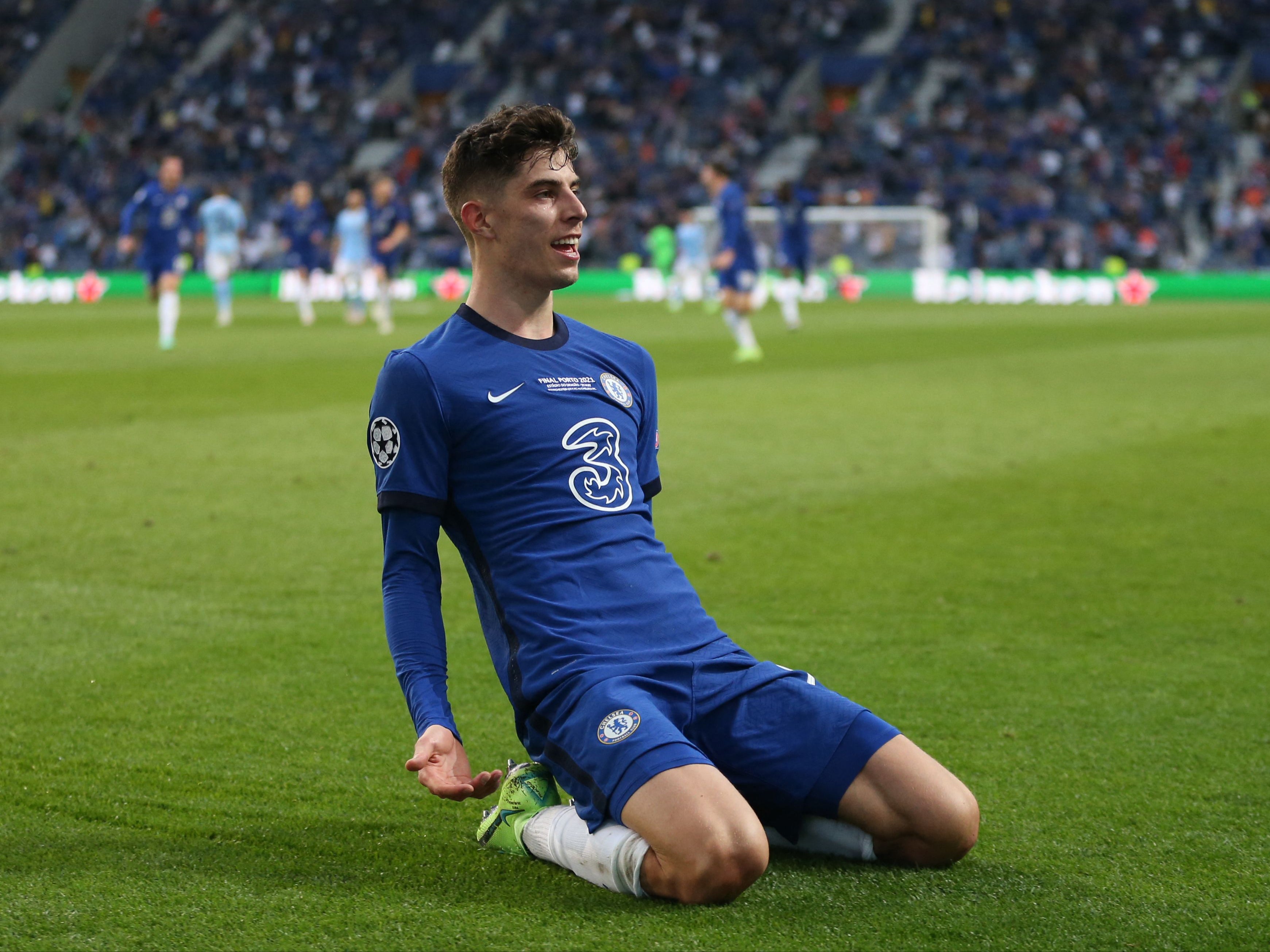 There were soon tears running. It was desperately cruel on a player that gifted, who had been so determined to take command of this stage.

The reality, however, was that he hadn’t been at his best even before that. The game was passing him by a bit. City needed structure. They needed something, anything. Guardiola eventually threw on Sergio Aguero. There was no last great goal, no ultimate farewell. There was only that ultimate victory for Chelsea.

Tuchel becomes the second coach to win it after losing the final the previous year after Jurgen Klopp. Then, in an empty and thereby soulless Stadium of Light, one state project in Paris Saint-Germain lost. The other one was beaten here, as Abu Dhabi still don’t have the silverware they want most, that establishment credibility.

Football’s greatest trophy instead goes to an oligarch’s pet project, for the second time. City are left to wonder what went wrong. Chelsea are only left with joy.