When Celtic lashed five goals past Hamilton on the first day of August a new league campaign bristled with promise. Ten-in-a-row still felt like a realistic and attainable prospect.

If Scotland’s champions played Accies every week it still would be. Comfortable 3-0 winners at New Douglas Park on Boxing Day, Neil Lennon’s team eased their recent troubles slightly by securing their first win of 2021 with the hat-trick. The aggregate scoreline between these mismatched teams now stands at 10-1.

Had Celtic been half as consistent against other teams in the Scottish Premiership there might still be a title race to speak of. Devoid of a win in the four games leading into this comfortable, if mundane, three points the Parkhead side have given themselves too much work now. While Rangers continue to show a relentless streak, three games in hand offer no real solace. 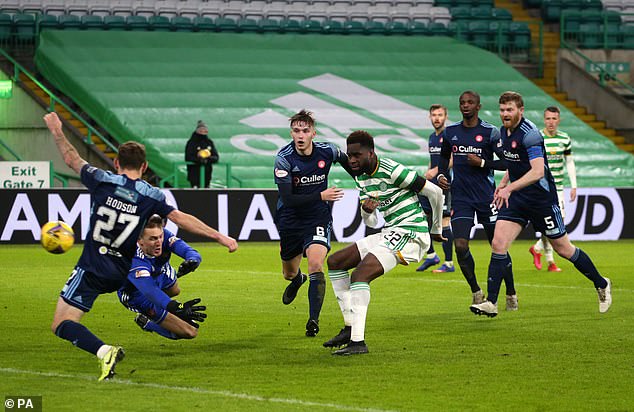 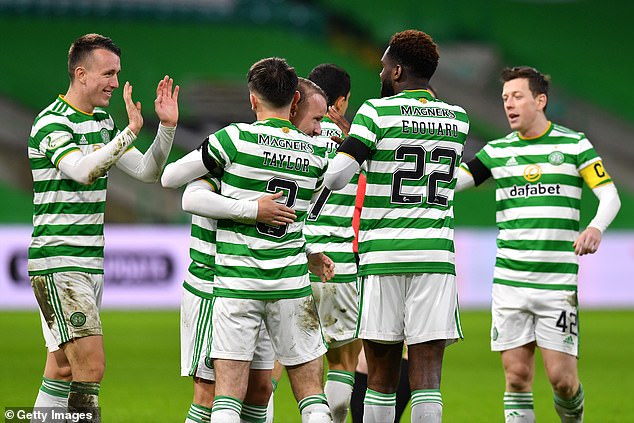 In these troubled times Neil Lennon must take his small mercies where he finds them. Against a Hamilton team with just one win in their last seven, a rasping low 25 yard strike from Leigh Griffiths after 12 minutes threatened a rout to match the opening day of the season. This time around some fine goalkeeping from Hamilton’s Ryan Fulton prevented the home team from racking up a few goals, but couldn’t stop Odsonne Edouard’s composed effort three minutes into the second half ending the game as a contest.

Before kick-off Celtic held a minute’s silence for two figures from the club’s past. Johannes Edvaldsson, the iconic Icelandic central defender of the 1970s, died earlier this week. Former manager Dr Jozef Venglos passed away on Tuesday at the age of 84.

Venglos will forever be known as the man who signed the talismanic Lubo Moravcik for £150,000. How Celtic could do with conjuring up deal like that in the final days of the window.

Whatever they pull out of the bag is surely too late now. A season of unrelenting mis-steps has seen Rangers show impressive consistency. In contrast Lennon has chopped and changed players and formations in the face of Covid-19 mishap and poor form in a number of areas. Edouard returned from a knee injury on Wednesday night and justified his selection with his obligatory goal against Hamilton

Yet nothing sums up the lack of fluency and consistency around Celtic this season more than the musical chairs surrounding the goalkeepers. 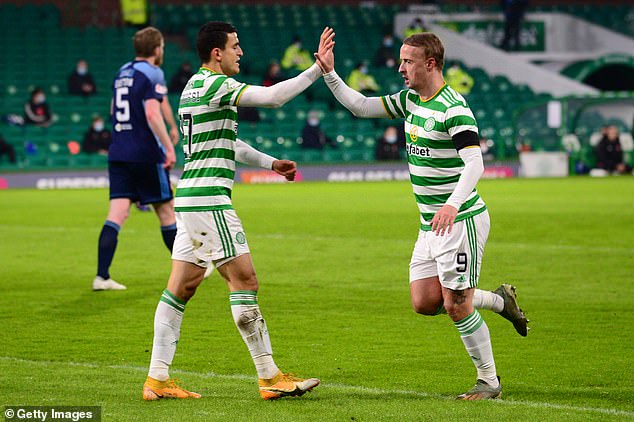 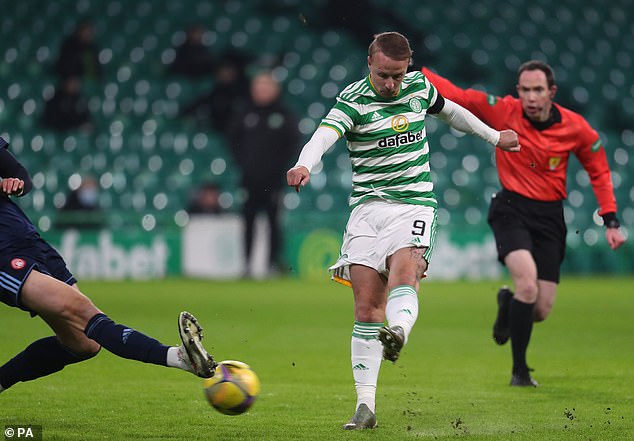 At the end of December Lennon went on record to reiterate the view that £5million signing Vasilis Barkas was brought in to be number one, challenging the Greek international to prove why.

Since then the champions have played five games in 2021, fielding three different keepers along the way.

Barkas started the defeat to Rangers on January 2. One of 13 players ordered to isolate after two positive cases of post-Dubai coronavirus in the Parkhead dressing room, Barkas made way for Conor Hazard in pallid draws against Hibs and Livingston then returned for last week’s 2-2 draw in West Lothian

On Wednesday night, from nowhere, Scott Bain back came out of cold storage for his tenth appearance of the season.

Whoever played in goal for Celtic was always liable to have a quieter night than opposite number Ryan Fulton.

If the Accies keeper was marginally slow to get down to the fizzing low Griffiths strike which found the bottom corner of the net to give Celtic the lead after 12 minutes he was quick to make amends by keeping his team in this game a good deal longer than he might have. 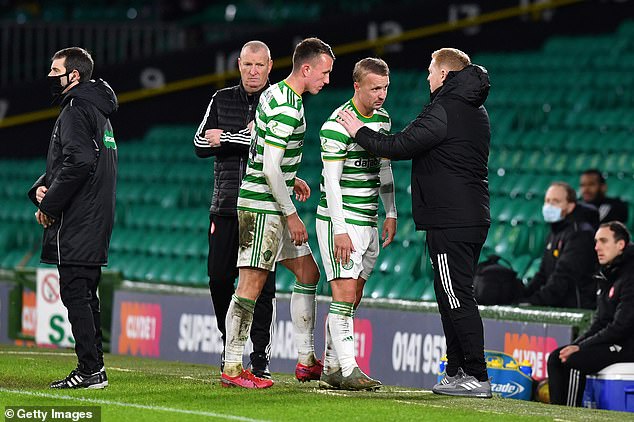 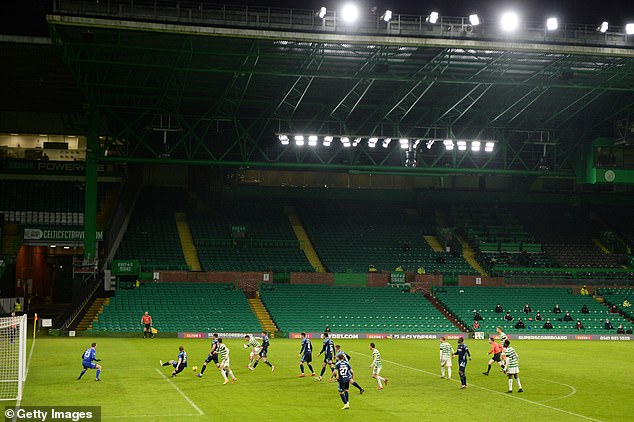 Aided and abetted by a confident display from their goalkeeper, Hamilton made the most of the reprieve.

Recalled at left back for Celtic, Greg Taylor is proving a more effective creator of chances than Diego Laxalt, his cut back for McGregor forcing Fulton to block with his legs. Twice more before the interval the former Portsmouth and Chesterfield keeper threw himself low to deny Edouard shots.

Had David Moyo scored with a glorious chance after 35 minutes Accies might even have gone in level at half-time. Scott McMann’s low cross from the left missed everyone and fell to the unmarked striker 12 yards out. The only Hamilton incursion of the half, he managed to miss the target with the goal gaping.

There was no guarantee the visitors would get another chance. It was always certain Celtic would.

Denied twice before half-time, Edouard claimed his 14th goal of the season with a sublime effort three minutes after the restart. A deft Griffiths pass picked out the Frenchman in a promising position, Edouard nicking the ball past Brian Easton before showing terrific composure to round Fulton and slot the ball high into the net from eight yards.

For so much of this season the £9million man has looked like a player who wished he was somewhere else. Rumours suggest Brendan Rodgers would like to grant him his wish by signing him for Leicester City. While twists and turns in the final days of a transfer window are not unheard of the sale of Jeremie Frimpong to Bayer Leverkusen for £11.5million makes it less likely he’ll be granted his wish. 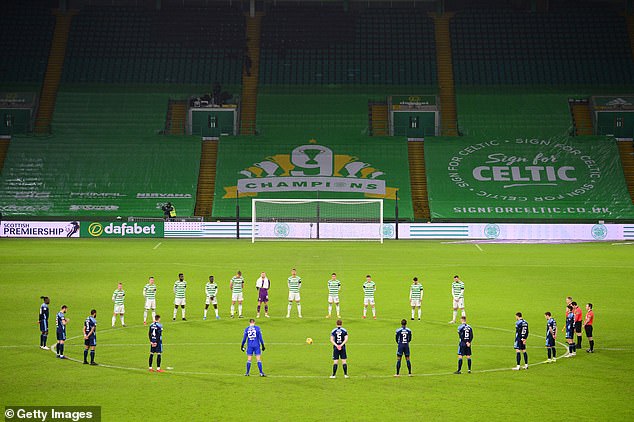