St Johnstone boss Callum Davidson believes problems for Scottish football brought on by the coronavirus pandemic are going to get worse ahead of the new Premiership season.

Ross County forfeited their Scottish League Cup opener at Forfar Athletic following a coronavirus outbreak at the club earlier this month. The Premiership side stopped all football operations after a number of players and coaching staff tested positive.

James Forrest was absent from Celtic’s training camp in Wales earlier this month after he had been identified as a close contact of a positive Covid-19 case.

Speaking to Sky Sports, Davidson detailed the difficulties St Johnstone faced last season as they completed the Scottish Premiership campaign amid a pandemic, and said he expects the problems to intensify even further as Scotland moves into ‘level zero restrictions’ from July 19 ahead of the new season.

Outdoor stadium attendances will be limited to 2,000 seated and 1,000 standing spectators under the new regulations.

“Last season for me was probably the most stressful time I’ve had in my life, you know the last three weeks of the season with basically keeping players out of Covid and trying to balance it (with getting results)” he said. 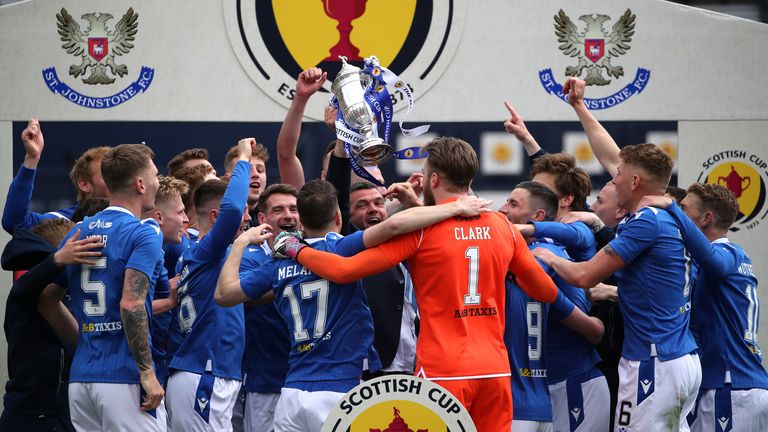 “Playing Celtic we had 10 senior professionals, I had to get an emergency goalkeeping in on loan – you know it was the first time I’ve ever been delighted with a 4-0 defeat.

“So, that is a challenge, it’s a huge challenge, it was just fortunate that we were high enough up in the league that it didn’t really affect us (with regard to getting relegated).

“I think it’s probably going to get worse for teams in the next couple of months. I think, obviously the younger generation are picking it up so I think for us to have players self-isolate is going to be very tough and I think it’s going to be something we are going to have to look at and how we can help the football teams.

“We can’t just carry loads and loads of players because the money situation is not there so we need to try and figure something out where we can limit the isolation period with everybody being safe and do something where we can help the teams perform.”

‘We can lose players, but not spirit’

St Johnstone could lose some of their star players this summer with Davidson facing a battle to keep together his double-winning squad.

Captain Jason Kerr, Jamie McCart and Shaun Rooney have all been linked with moves away by newspaper reports.

Davidson says he will not prevent players leaving the club during the transfer window but wants numbers to be limited in order to maintain the spirit within his squad.

“I want to be successful, I want to win every game – its simple as that,” he said when asked about interest in his players.

“I think if we are going to lose a couple (of players) in the summer we have to make sure we don’t lose too many because of the spirit in the squad – that’s a key factor.

“It has to be two-fold, there has to be a balance for the club but what I would say is that I would never stop anybody playing at a higher level.

“I’d never really want to put the brakes on that. You look at what they’ve achieved, much more than I ever achieved as a player for St Johnstone, so all credit to them.”