Out with the old, in with the new?

Alexandre Lacazette, Granit Xhaka, and Bernd Leno with a late penalty save made sure that end-of-year-mantra did not quite fit Arsenal’s big Boxing Day win over Chelsea but their streak-busting victory over their London rivals was driven by an injection of youth.

After no Premier League win in seven and a Carabao Cup quarter-final defeat just a few days before Christmas, Arsenal were on their knees going into this one. Defeat would have piled the pressure onto boss Mikel Arteta and left the Gunners wobbling above the relegation zone.

With centre-back Gabriel absent due to coronavirus regulations, Willian and David Luiz unwell, and Pierre Emerick-Aubameyang fit enough only for the bench after his recent calf problem, Arteta’s Arsenal squad was exposed, too. He had no option but to turn to the next generation.

Twenty-year-old Emile Smith Rowe, along with 19-year-old pair Gabriel Martinelli and man of the match Bukayo Saka, rose to the challenge – and, crucially, pulled their team-mates along with them.

The toothless, wounded Arsenal we have become familiar with in the past few months was reinvigorated by these three talented, energised players in the attacking positions behind Lacazette.

The hunger of Smith Rowe and Martinelli was plain to see in the first half at the Emirates. The pair were making their first Premier League starts of the season and brought drive to Arsenal’s play.

In four of their past five domestic games, Arsenal have been behind inside 25 minutes. On Saturday they came out of the traps with intent.

“It was different from the last few games, we started really, really well,” said Arteta afterwards. “We were on top and that elevated the level of confidence of the team.”

Smith Rowe ran further than any other player on the pitch in the opening 45 minutes as he, in Neville’s words, “more than held his own” against N’Golo Kante. Meanwhile, no player could top Martinelli’s 12 sprints in that first period.

Saka, who would finish the game having covered more ground than anyone else, made “Chelsea look like old men,” according to Neville. 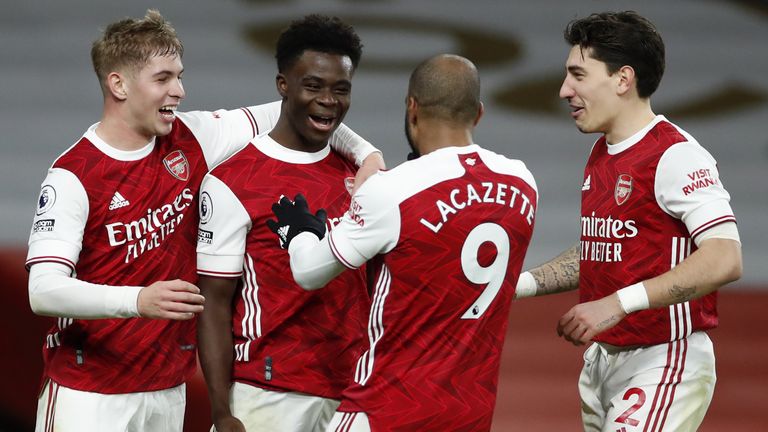 The teenage England international once again demonstrated his importance to this side – both now and for the years ahead. It was one of his many mazy runs which drew the free-kick for Xhaka to curl home a delightful second, and another which led to his cross-shot looping in beyond Edouard Mendy for Arsenal’s third.

Saka is the youngest Englishman to score for Arsenal against Chelsea since Theo Walcott in the 2007 League Cup final.

Smith Rowe got the assist for that one, and it appeared Saka was looking for Martinelli at the back post.

Mikel Arteta told Sky Sports before kick-off that you need “personality” as well as quality in these big games. This young trio showed both attributes in abundance.

Perhaps it was only Martinelli marching off the pitch a bit sore – from a blow to his back and a handful of missed chances from his game-high four shots. His boss, though, would have been delighted with his contribution.

The hope now for Arteta will be that his team – with this blend of youth and experience – can use this morale-boosting win as a launchpad.

Next up in the league are Brighton, West Brom, Crystal Palace, and Newcastle. Four teams around Arsenal in the table, but four sides they will be favourites to beat to pull themselves up the standings.

For the first time in a long time, there is now hope at Arsenal of building some positive momentum.

Arteta can thank his young, rising stars for restoring that belief.