Report and free match highlights as Branislav Ivanovic’s clearance diverts into the net via Jake Livermore’s midriff to put Brighton ahead; Karlan Grant’s first West Brom goal rescues a point; Brighton winless at the Amex since beating Arsenal in June

Karlan Grant’s late strike denied Brighton their first home win of the season with West Brom coming from behind to draw 1-1 at the Amex Stadium.

The summer arrival – making just his second Premier League start for West Brom – spared the blushes of his captain Jake Livermore who had unwittingly given Brighton the lead in the first half (40). Branislav Ivanovic’s clearance hit him in the midriff before diverting into the net, leaving the winless Baggies with a daunting task.

But the visitors were much improved after the break and made a deserved breakthrough in the 83rd minute. Callum Robinson’s fizzing cross was missed by the Brighton defence with Grant able to smash an effort past the stranded Mat Ryan to snatch a point for his side.

It leaves Brighton winless at the Amex this season – having not won at home since beating Arsenal 2-1 in June – and they remain in 16th. West Brom also put another vital point on the board and are now two points clear of the relegation places.

How West Brom fought back for a point 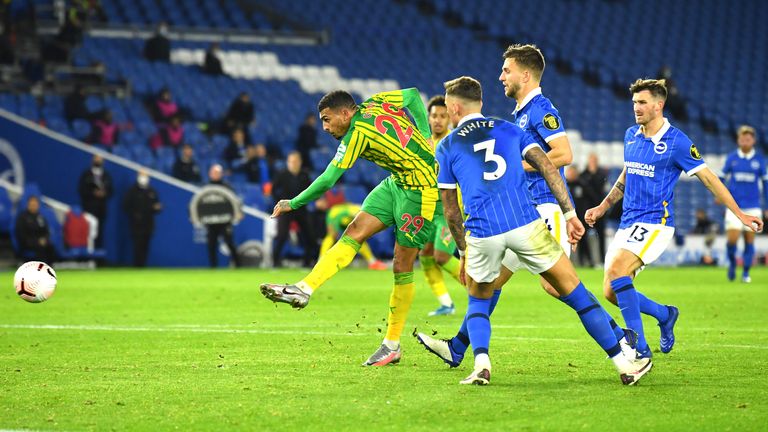 Brighton dominated the first-half chances as they searched for improvement at home. They had the ball in the back of the net in the 15th minute, but it was ruled out for offside as Neal Maupay turned home Adam Lallana’s lifted cross. Soon after, the pair combined again but West Brom goalkeeper Sam Johnstone stuck out a leg to deny Maupay the opener.

Leandro Trossard was also a lively member of Brighton’s attack and forced two good saves from Johnstone around the half-hour mark. Firstly, he fired straight at the goalkeeper before Johnstone punched a second effort from the Belgian clear, needing another punch just after to see the looping ball away.

Man of the match: Adam Webster.

But for all of Brighton’s good play, it was a calamitous West Brom own goal that saw them ahead. After Lallana’s shot was blocked, Tariq Lamptey flashed a cross through the area which Ivanovic met with a sliding clearance. However, it smacked into the midriff of Livermore, sending it flying into the back of the net with the West Brom captain not far behind it.

To use the old football cliche ‘a game of two halves’, West Brom were much improved after the break and had the best chances of the second period. Inside three minutes, Joel Veltman – making his first Premier League start – was needed to make a vital clearance as Conor Gallagher struck from 20 yards out.

Matheus Pereira then tried his luck from the same distance in the 66th minute, but his side-footed effort curled wide of the far post. Soon after, Filip Krovinovic lashed an effort goalwards and it was the first real test of Brighton goalkeeper Ryan, who got down well to see the effort away for a corner.

Pereira had a similar strike to his earlier effort as the game entered the final 15 minutes. A Robinson cross was cleared into his path and his powerful, curling effort made the lightest of grazes on the post before thundering wide. But West Brom finally made the breakthrough with seven minutes to play and it was a super effort for Grant’s first Baggies goal. 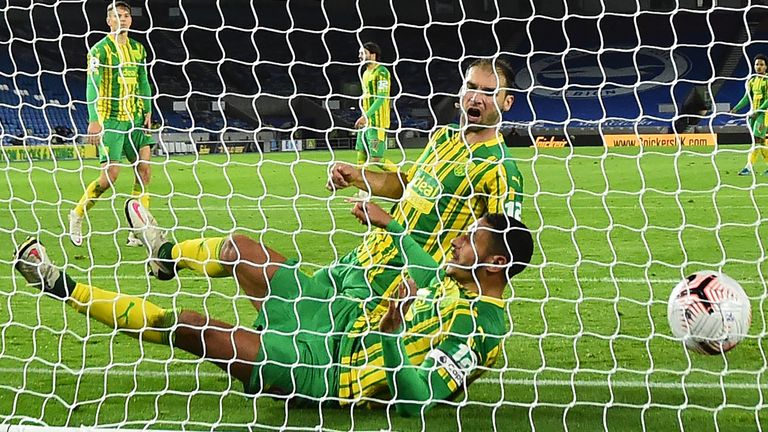 Robinson sent another excellent cross into the area, which was missed by the Brighton defence. It found Grant in the middle and he took a touch before smashing the volley past Ryan and securing a much-needed and well-deserved point for West Brom.

Man of the match – Adam Webster

Adam Webster had to step into the captain’s role with Lewis Dunk suspended, and he produced a good performance. He topped the Brighton charts for passes made (79) and successful passes made (60) and made the most passes in the opposition half (41).

He led the way again for touches (87) and made the joint-highest number of clearances (5) and interceptions (2). Although he will be disappointed for his role in West Brom’s equaliser, it was a solid showing as Brighton skipper.