Brentford players will stop taking a knee before their games, as they believe the gesture is “no longer having an impact” in the fight against racism and discrimination in football.

Players across the English professional leagues started kneeling before kick-off when football resumed in June after the first coronavirus lockdown, to highlight racial inequality issues sparked by the death of George Floyd while in police custody in May last year.

However, many voices in the game believe the gesture is quickly losing its original meaning, such as QPR sporting director Les Ferdinand, who said in September its impact has now been “diluted”.

A statement from the #BrentfordFC dressing room

Brentford players issued a statement through the club’s channels on Saturday evening, stating they believe it is time for them to support the fight against discrimination in football through more tangible means.

“As a group of players, we have decided we will no longer take a knee before the start of matches,” the statement read. “This will begin when we face Barnsley tomorrow, Sunday 14 February.

“This decision has come after lengthy discussions as a group. We have been taking a knee before games since June but, like many of our fellow players at other clubs, no longer believe that this is having an impact. We believe we can use our time and energies to promote racial equality in other ways.

“We have experienced racist abuse first hand and have also seen some appalling comments made to other players past and present.

“There is a clear need to continue to push for an end to all discrimination and, as players, we will be part of that at Brentford FC, in football in general and in the wider community. 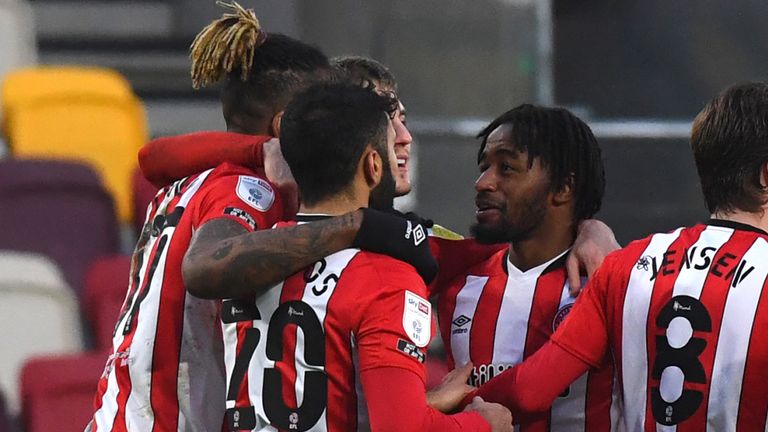 “Togetherness is one of our key values as a group and plays an important role in helping us move towards reaching our goals. Racism is the opposite of what we stand for. As players we will show our commitment to Togetherness and racial equality on and off the pitch between now and the end of the season, and beyond.

“We will also support our colleagues at other clubs that still want to take a knee before games.”

A survey by the Professional Footballers’ Association (PFA) in December found there was an overwhelming support by professional players to continue taking a knee before kick-off.

Some players were subject to backlash from fans when they were briefly allowed back into stadiums in December, with a high-profile incident at Millwall where home supporters booed players who took a knee before kick-off.

Also in December, an Exeter fan was ejected from the stadium for booing ahead of the home side’s clash against Harrogate Town, and jeers were heard at the Cambridge United stadium during their game against Colchester United.

“There have been detailed and lengthy discussions on this topic both in the playing group and across the club,” added Jon Varney, Brentford chief executive.

“Taking a knee is just one way our players have been showing their commitment to racial equality. We supported their desire to do it and we now support their desire to focus on other ways to show this commitment.

“We have been very clear in our ambition to be the most inclusive club in the country and our players want to and will play a big part on this journey.”

Sky Sports is committed to making our channels a safe place for debate, free of abuse, hate and profanity. If you see a reply to Sky Sports posts and / or content with an expression of hate on the basis of race, colour, gender, nationality, ethnicity, disability, religion, sexuality, age or class please copy the URL to the hateful post or screengrab it and email us here.