Brentford lost further ground in the race for automatic promotion as they squandered a lead for the second time in a matter of days to draw 1-1 with Nottingham Forest.

Ivan Toney put Thomas Frank’s men – who had been held to a 2-2 draw by Derby on Tuesday – ahead in the first half when he rolled in his 28th goal of the season from the penalty spot (12).

But Forest never looked out of a tight game in west London and earned themselves a share of the spoils when Filip Krovinovic slotted in, despite suspicions of a foul in the build-up (63). 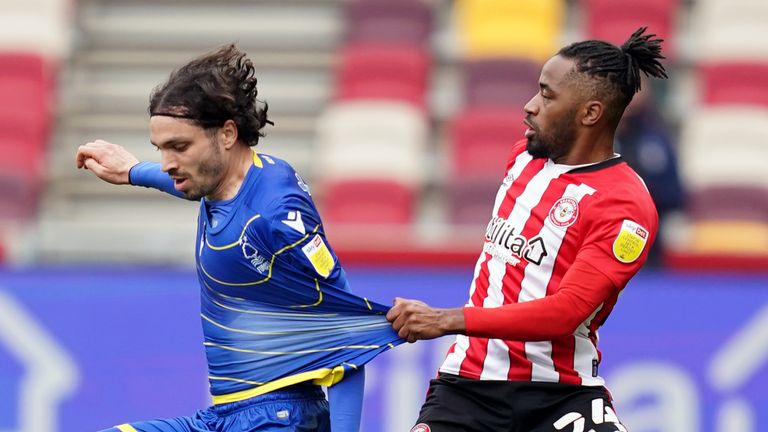 Brentford stay fourth, four points behind Watford ahead of the remainder of Saturday’s action, while Forest move onto 42 points, 10 points above the relegation zone with eight games to play.

How Brentford were dealt a hammer blow on home turf

In order to keep their top-two hopes alive, Brentford needed an immediate reaction to the midweek draw but had their work cut out against one of the division’s meanest defence of late, who had conceded just 10 goals in 15 games so far in 2021.

Neither side was eager to show their hand in a low tempo opening 10 minutes, but the chance to score the opener was presented to the Bees when Gaetan Bong pulled down Toney in the box, allowing the Championship’s top scorer to nonchalantly roll home and move to within three goals of a new divisional scoring record.

Forest responded well and soon began to ask questions of their hosts, though should have been two behind when Vitaly Janelt’s shot hit the crossbar and dropped kindly for Henrik Dalsgaard, who couldn’t react quickly enough to tap in a second from just a few yards out.

Exquisite build-up carved another golden opening for the hosts 11 minutes after the break, as Toney collected Christian Norgaard’s through ball and squared for Bryan Mbeumo, who couldn’t steer home under pressure from Bong.

Chris Hughton’s men then made their hosts pay just after the hour mark, but it didn’t come without controversy. Cafu went unpunished after grappling with Mathias Jensen on halfway, with Alex Mighten then shifting the ball on to Bong out on the left flank.

His deep cross to the far post was flicked on by Lewis Grabban but only half-cleared by Winston Reid; his clearance fell straight to Krovinovic, who made no mistake to level.

Toney and second-half substitute Saman Ghoddos tried their luck from range as time ticked on, while Tariqe Fosu also had a shot blocked, but efforts to find a winner proved futile.

Man of the match – James Garner

“He has been all over the pitch today. He’s had plenty of energy, kept the ball well and kept things moving for Forest.”

Following the March international break, Nottingham Forest return to action at 3pm on Friday, April 2 when they travel to South Wales to take on Cardiff, while Brentford take on Huddersfield at the John Smith’s Stadium at 12.30pm the following day, in a game live on Sky Sports Football.