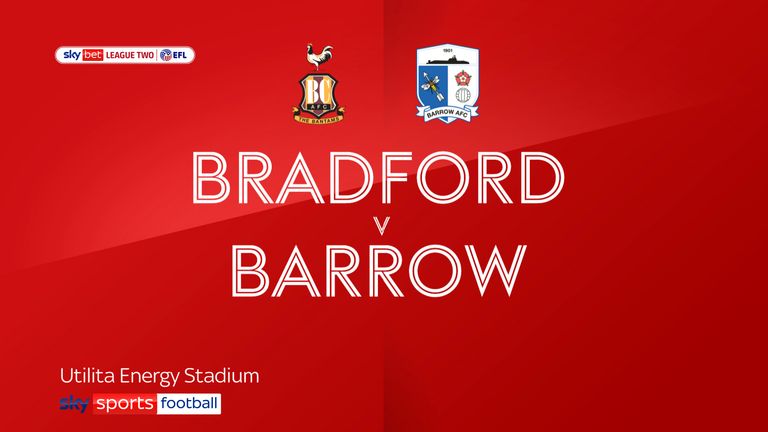 Danny Rowe gave Bradford the lead in the fifth minute on his home debut with his second goal in two matches following his transfer from Oldham.

Right back Finn Cousin-Dawson found him with a long pass and Rowe shook off the challenge of Tom Davies before scoring with a low shot into the far corner of the net.

Bradford had a let-off in the 19th minute when Josh Kay saw his shot rebound off the post and there was another escape for the home side in the 31st minute when Scott Quigley took the ball round keeper Sam Hornby before firing into the side netting from an angle.

However, Barrow deservedly equalised after 36 minutes when Anthony O’Connor fouled Quigley in the penalty area and the striker picked himself up to score from the spot with his sixth goal of the season to leave the teams level at half time.

Bradford regained the lead in the 49th minute when skipper Paudie O’Connor found Gareth Evans on the left with a long pass out of defence and he squared the ball into the path of Callum Cooke to score from just inside the penalty area.

Barrow pressed hard for an equaliser and Hornby did well to block Quigley’s close-range shot in the final minute but Bradford’s defence stood firm.