Match report as Tammy Abraham adds to his hat-trick against Luton in the fourth round with a second-half tap in; Chelsea had just one shot in the first half as Barnsley dominated, but were unable to find the net; Chelsea will face Sheffield United at home in the quarter-finals Tammy Abraham scored his fourth FA Cup goal of the season as Chelsea edged past an impressive Barnsley 1-0 to set up a quarter-final tie against Sheffield United.

The striker had scored a hat-trick against Luton in the fourth round – in what proved to be Frank Lampard’s final game in charge – and found the net again with a close-range finish in the 64th minute, which proved to be Chelsea’s only shot on target.

Barnsley pushed their Premier League opponents all the way, particularly in the first half, managing 14 shots to Chelsea’s six. Callum Brittain forced a reaction save from Kepa Arrizabalaga early on before Abraham cleared a flicked effort from Michael Sollbauer off the line as the hosts piled on the pressure in the final 15 minutes.

It was an ultimately scrappy performance from a much-changed Chelsea side, but Abraham’s goal ensures their place in the quarter-finals and a home tie against Sheffield United in March.

How Barnsley took the game to Chelsea Barnsley began well and tested Kepa inside 10 minutes. Alex Mowatt gave Callum Hudson-Odoi the slip on the left before lofting a cross into the area. Conor Chaplin headed it on with Brittain waiting inside the six-yard box, but his flicked effort was saved by the Chelsea goalkeeper at close range.

With no VAR in use at Oakwell, Chelsea then had two penalty calls turned down. The first saw Toby Sibbick sweep at the feet of Abraham, but Martin Atkinson waved away the claims. Abraham was involved again soon after, going to ground after a tussle with Mads Andersen, but that was also dismissed.

Man of the match: Tammy Abraham.

Chelsea did not have many bright moments in the first half, but their best move almost led to a goal. Christian Pulisic drove through the midfield before picking out Hudson-Odoi on the left. His cross flew over the waiting heads in the middle but did find the incoming Pulisic on the right, but he slipped as he connected onto the ball, sending it skewing wide.

With the last kick of the half, Barnsley could have taken the lead with a well-worked corner that almost caught Chelsea out. Mowatt’s delivery was sent back into the area by Chaplin for the waiting Brittain. However, Victor Adeboyejo unwittingly deflected the latter’s shot inches past the post.

Unimpressed with a disjointed first-half performance, Thomas Tuchel made two changes at the break, bringing on Antonio Rudiger and Reece James. Although it took them a while to settle, Chelsea soon saw chances fall their way.

Hudson-Odoi dinked past Brittain and Sibbick on the left before firing in a low effort, but the ball wriggled past the far post with Abraham unable to get there in time. Just after, Rudiger nodded a Hakim Ziyech free kick just wide.

Chelsea eventually broke the deadlock as Billy Gilmour slotted James through on the right flank and the full-back delivered a fierce, low cross into the area which Abraham turned home from close range. The striker then showed off his defensive prowess as Barnsley refused to go quietly. Mowatt fired in a wonderful free kick, which Sollbauer flicked on with his first touch of the game. However, Abraham was on the line to see the ball onto the top of the net with a header and then cleared the resulting corner.

Barnsley continued to push for what would have been a deserved equaliser, with Kepa making a late save from Michal Helik’s ricocheted header off of Emerson, but Chelsea managed to scrap their way into the quarter-finals.

Man of the match – Tammy Abraham 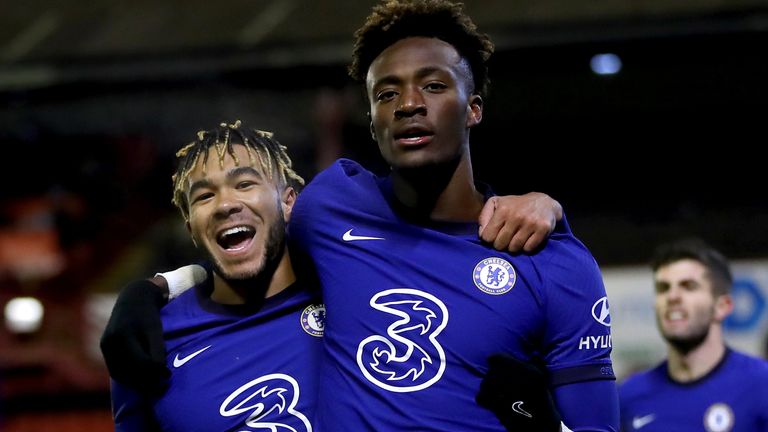 Chelsea would not have made it into the last eight without Abraham at both ends. Of course, he scored the winner with a well-taken tap-in, but his contribution in defence in the final minutes of the game should not be underestimated.

A goal at one end and a goal-line clearance at the other!

His goal-line clearance was vital, as was his clearance from the corner after. They are just two examples of some superb defending from a player who is turning into a bit of an FA Cup goal machine.

Abraham has been involved in nine goals in his last seven starts in the FA Cup (6 goals, 3 assists) and since the start of last season, has scored 30 goals for Chelsea in all competitions – at least 11 more than any other player at the club.

Barnsley face a tough trip to Brentford on Sunday in the Sky Bet Championship; kick-off 1pm. Chelsea will be live on Sky Sports on Monday evening when they welcome Newcastle to Stamford Bridge; kick-off 8pm.

Chelsea will face Sheffield United at home in the FA Cup quarter-finals next month.

The FA Cup schedule has been confirmed, with the final set to take place at Wembley on Saturday, May 15.