Barcelona should have Leeds United boss Marcelo Bielsa at the top of their manager wishlist, according to former Aston Villa and Chelsea striker Tony Cascarino. Barca are set to sack manager Quique Setien following Friday’s demoralising 8-2 loss to Bayern Munich in the Champions League quarter-final. Former Tottenham boss Mauricio Pochettino is one of the favourites to land the Nou Camp job.

However, Cascarino believes Bielsa would be the ideal candidate for the role.

Bielsa led Leeds to promotion to the Premier League in just his second season in charge and is adored by the club’s supporters.

But Cascarino says Barca should attempt to draw the 65-year-old away from Elland Road.

“It’s an incredible job and they would have a number of great managers [lined up],” Cascarino told talkSPORT.

JUST IN: Man Utd target excited about playing alongside Fernandes and Pogba 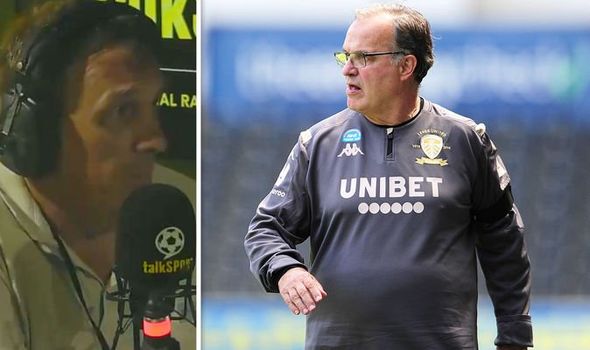 “If you said to me tomorrow, ‘who would I want to take?’, sorry Leeds fans, but I would be after Bielsa every day of the week.

“Because he’s Barcelona and Barcelona type of football, the way they play, the hunger, the emphasis on young players.

“Barcelona can attract the very best players in the world and, if they could do that, I’d want a manager of his ilk.

“To me, he would be the outstanding candidate right now.

“By the way, that would be a rollercoaster ride because he’s quite capable, if he didn’t get what he wanted…

“He’s not money-motivated as in he always talks football more than money because he’s rewarded hugely within the game.”

Barcelona would be the third Spanish club Bielsa would have managed.

The Argentine had a brief spell at rivals Espanyol in 1998 and had two years at Athletic Bilbao between 2011 and 2013.

“There are some decisions that we have already made, and others that we will make over the next few days,” Bartomeu said.

“Announcements will be made from next week, we need to make decisions after things have calmed down. Today is a day for reflection.

“Tomorrow we will try to raise our fans’ spirits following such a heavy defeat.”