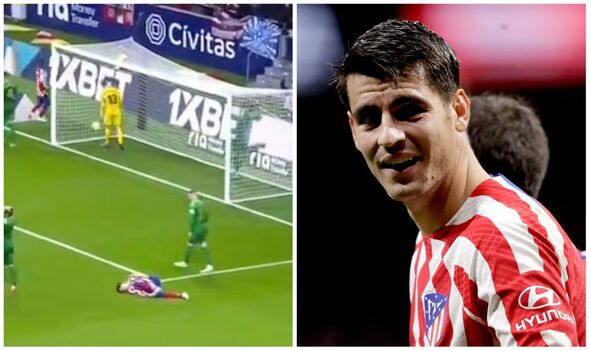 Alvaro Morata did not realise he had scored a wonderful goal for Atletico Madrid after being left stricken during the La Liga clash with Elche. The Spain striker scored a stunning solo strike in the ill-tempered affair, which finished 2-0.

Morata collected Antoine Griezmann’s pass on the right wing and twisted around a defender before bursting into the box. The former Chelsea attacker dummied a shot with his right foot before firing goalwards.

But Morata appeared to injure himself while shooting and was seen clutching his left ankle following a desperate tackle by an Elche defender. As Morata lay on the turf, the ball deflected into the air and remarkably looped into the net.

The 30-year-old did not appear to realise he had scored in a bizarre moment. The rest of his team-mates ran away to celebrate the goal.

Manchester United-linked forward Joao Felix had opened the scoring in a game that featured three red cards. Atletico had Mario Hermoso sent off early in the second half, while Elche duo Gonzalo Verdu and Domingos Quina – a former Watford and West Ham playmaker – were dismissed.

Atletico are third in La Liga after a recent upturn in form but remain far off pace-setters Barcelona and rivals Real Madrid. They sit 10 points behind Barca, with Simeone taking responsibility for their failure to properly challenge.

Simeone could lose striker Felix in the January transfer window. Premier League clubs Man Utd, Chelsea and Aston Villa have all been linked with the Portugal international, who reportedly wants out of the Spanish giants following an impressive World Cup.

The 23-year-old has struggled for consistency since his £113million move from Benfica in 2019. His goal against Elche was just his third La Liga strike of the season.

CEO Miguel Angel Gil Marin admitted in early December that suitable offers would be considered. He hinted that Felix had fallen out with Simeone.

“He is the biggest bet this club has taken in its history. I personally think he’s a top talent, a world class player,” he said.

“For reasons it isn’t worth getting into – the relationship between him and the boss (Simeone), the minutes played, his motivation right now – it makes you think that the reasonable thing is that if there’s an option that’s good for the player, good for the club, we can look at it.

“I’d love him to stay personally, but I don’t think that’s the player’s idea.”