Los rojiblancos are one win from the title

It’s not just the Premier League which is fast approaching the final day of the season.

All over Europe, the top leagues are preparing for a weekend of drama at the top and the bottom, with two of the top titles still to claim and a host of European and relegation spots to sort, too.

AC Milan’s fall from the top of the table in Serie A could yet take them outside of the Champions League spots at the last breath – but if they are to be in, it could be fellow Italian giants Juventus who miss out.

Above all else, though, it will be all eyes on two clubs who have fought the odds, the finances and their far bigger rivals all season long – and now stand on the cusp of immortality.

Here are all the storylines to watch from the Bundesliga, Serie A, LaLiga and Ligue 1 on the final weekend of 2020/21.

There are permutations and other options, sure, but the basic message to both Atletico Madrid and Lille is: win your final match, and win the league.

That’s all either side must worry about, with Atleti top of LaLiga, two points clear of Real Madrid, and LOSC holding just a one-point advantage over Paris Saint-Germain. Both the chasing clubs are the richest in the league and the reigning champions, so it would be a real achievement – even an upset in Ligue 1 – if both clubs see it through.

In Spain it will all be wrapped up on Saturday evening. Atleti kick-off at 5pm (BST) – along with seven other matches – and if they win at Real Valladolid, they are champions for the first time since 2014.

The one sticking point is that Valladolid themselves need a win to have a hope of avoiding relegation, coming into this fixture two points from safety in 19th.

In terms of the maths and permutations, what Atletico must do is match or better Real’s result at home to Villarreal; a Real win and Atletico draw leaves them level on points, but with Zindine Zidane’s side taking the title on head-to-head results.

Over in France, it’s Sunday evening, 8pm (BST) kick-off for Lille at mid-table Angers who have nothing to play for. It’s straight-forward for Cristophe Galtier’s side in that PSG’s goal difference is far superior, so they must keep the one-point buffer intact.

Lille have won the league championship just once since 1954, that coming in 2011.

Serie A’s title fight is long since done, but the top-four race has gone down to the final day: Atalanta are in thanks to their head-to-head record over Juventus, but three teams – Juve, Napoli and AC Milan – are desperate to join them and title-winners Inter.

There are of course only two spots free, and Atalanta host Milan at 7:45pm (BST) on Sunday in the game which could dictate everything. Napoli, home to Verona, should win. Juve, away to Bologna, should win.

But a Milan win with the above combination leaves Andrea Pirlo, Cristiano Ronaldo and the gang outside Europe’s elite on head-to-head – an embarrassing failure to even think about for one of the three clubs desperately clinging on to ‘Super League’ status. 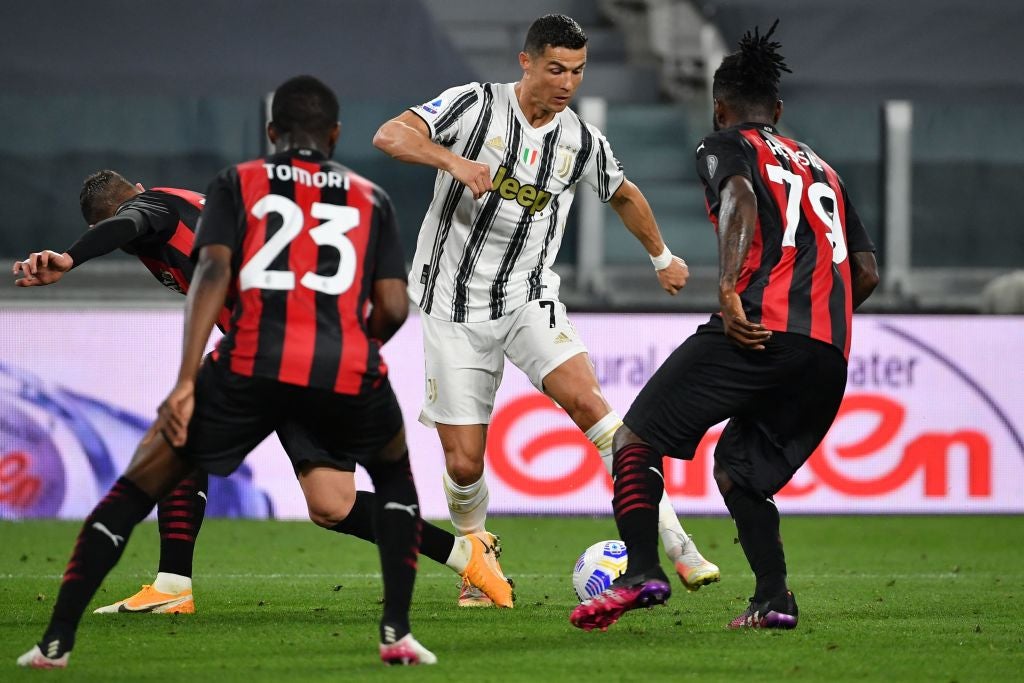 Spain and Germany’s Champions League spots are sealed, but in France Monaco hold third, with Lyon looking to pounce if they slip up at the final post.

Last-chance saloon to avoid the drop

Of course, it’s not just silverware and Europe which can lead to devastation or delight. At the other end of the tables in Europe’s top-five leagues, several sides are trying to stay clear of relegation.

It’s over and done with in Italy, but elsewhere play-off spots in France and Germany must be decided as well as those who automatically go down: one in the Bundesliga, two to decide in LaLiga.

Along with Valladolid, Elche are currently in the drop zone in Spain, with Huesca just outside. Two from three will join Eibar in dropping to La Segunda.

Schalke are long gone from the Bundesliga after an abysmal 18 months, but Koln, Werder Bremen or Arminia Bielefeld can all either go straight down too, get one last shot with the relegation play-off spot…or seal safety for another season.

Koln play Schalke at home – a third win in their last five games could complete a remarkable escape.

Finally, while Lille try to win the title, any one of six clubs could end up in the relegation play-off spot in Ligue 1. It’s currently Nantes, but Lorient, Brest, Strasbourg, Bordeaux and Reims are all within two points of the Canaries, who have won their last four matches in another stirring late-season revival.

One more weekend, so much at stake – it’ll all be over by Sunday evening.