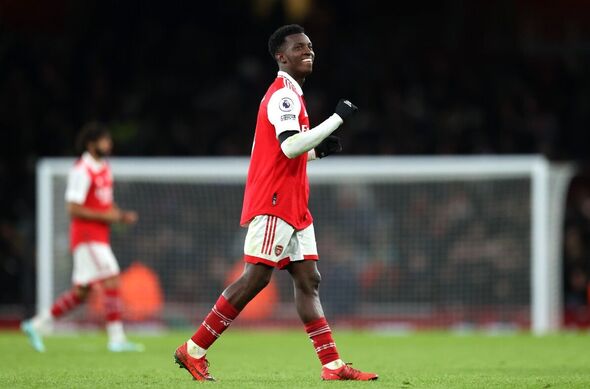 Eddie Nketiah admits he is no replacement for Gabriel Jesus. However, at the same time, the 23-year-old says there is stuff he can do that the injured Brazil international can’t.

It has been a frustrating time for the Chelsea and Arsenal academy product since he agreed to sign a new five-year contract at the Emirates in June.

The 3-1 win against West Ham was his first start of the season after a dozen Premier League appearances as a substitute – and he marked it with a well-taken third goal to help keep Arsenal clear at the top of the table.

Before the World Cup, it was the form of £45m signing Jesus that was keeping Nketiah out of the team – his five goals in 14 goals propelling Arsenal to the top of the table in the first place.

However, a knee injury picked up in Qatar in the group game against Cameroon forced Jesus to fly back to London early for surgery, and although manager Mikel Arteta is refusing to put any time limits on his return, he is expected to be out until late March at the earliest.

“We’re different players but at the end of the day we both want to help the team. Whether it’s me or him, we both support each other. I wish him a speedy recovery and hopefully I can continue to help the team.”

The frustration of sitting on the bench this season is a contrast to the end of the last campaign when Nketiah’s five goals in seven games were not quite enough to see Arsenal snatch a Champions League spot.

“Obviously any player wants to be playing more,” Nketiah said. “But I’m not one to moan or complain. I just keep working and keep chipping away at the opportunities I do get. It’s a long season and I knew I’d have my time. This is an opportunity for me and it’s just about continuing to work hard and do as much as I can to help the team.

“There’s a way of doing it and that’s through training every day, performing when you come on and giving your best. The manager knows what kind of person I am in terms of wanting to play all the time so I don’t particularly need to go knocking on his door every week.

“He knows that whenever I am given the opportunity I will always give 100 percent to help the team.”

It meant that the England under-21 international record goalscorer was more than ready when the chance came – even after the long World Cup lay-off.

“There’s a pressure whenever you step on the pitch for Arsenal, especially with how well the team has been doing,” he said. “I wanted to come in and add to that so of course there was a bit of pressure. But I relish this kind of opportunity. These are the kind of games you want to play in and to have an effect.”