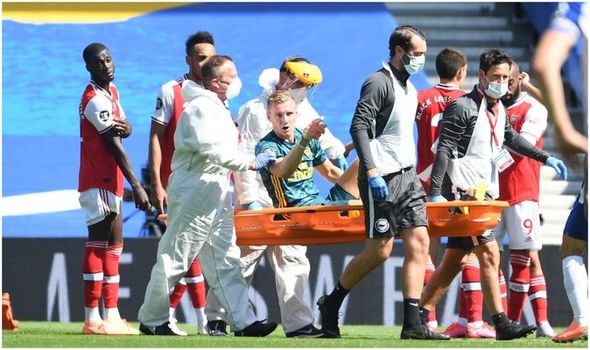 Arsenal Invincible Jens Lehmann has sent a message to Bernd Leno after the Gunners goalkeeper suffered a sickening injury in Saturday’s defeat to Brighton and Hove Albion.

Leno appeared to twist his knee after landing awkwardly following an aerial challenge from Neal Maupay. He was carried off the pitch on a stretcher and pointed his finger at the Brighton striker on the way.

It is another headache for Mikel Arteta, who saw his side collapse to a 2-1 defeat at the AMEX Stadium.

Nicolas Pepe curled Arsenal into a second-half lead with a delicious effort but the advantage lasted less than 10 minutes as Lewis Dunk bundled the ball over the line. A cruel twist of fate befell the Gunners as Maupay hit the winner at the death.

Leno’s injury was the key talking point, however, and Lehmann issued a message to his countryman afterwards. 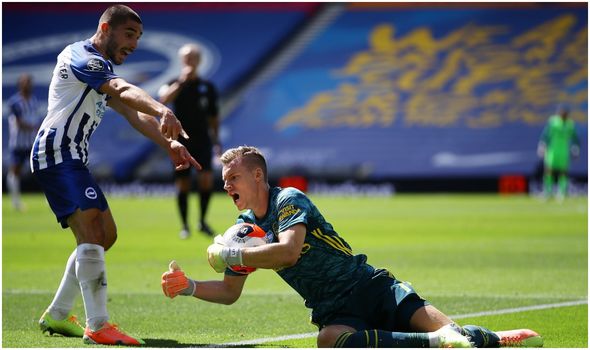 “I am really sorry for #BerndLeno,” the former Arsenal goalkeeper wrote on Twitter.

“He did great for #Arsenal and I hope his injury is not too bad and will recover soon.”

The Arsenal players reacted angrily to Maupay at the final whistle but Arteta exonerated the Frenchman of blame.

“I believe that no player has the intention to hurt anybody and I believe in this case it’s exactly the same, it was unfortunate,” he said.

“Bernd’s injury doesn’t look good and we will have to assess him probably tomorrow, but it can happen on a football pitch.

“It’s a knee injury, I think he had a hyperextension of the knee and we have to assess the damage.”

When asked if Leno’s injury contributed to the defeat, Arteta said: “No, I don’t think that’s the case because a lot of things happened afterwards, we scored the goal and we had more than enough opportunities to put the game to bed so we can’t use it as an excuse.”

Maupay issued an apology to Leno but did aim a cheeky dig at Arsenal’s players in his post-match interview.

“At half-time I went to Mikel Arteta, their manager, to apologise because I never meant to injure their keeper,” he said.

“I just jumped to get the ball maybe and when he landed he just twisted his knee, so I apologise to their team and to him as well.

“I’ve been through a bad injury so I know it’s hard but I never meant to hurt him.

“But some of the Arsenal players need to learn humility maybe sometimes. They’ve been talking a lot first half, second half when they were 1-0 up – they got what they deserved.”