Arsenal returned to the top half of the Premier League for the first time in two months after beating Newcastle 3-0 at the Emirates; Emile Smith Rowe provided the assist for Bukayo Saka’s strike Gary Neville heaped praise on the growing maturity of Emile Smith Rowe in transforming Arsenal’s season following his outstanding display in the 3-0 win over Newcastle on Monday Night Football.

Pierre-Emerick Aubameyang scored a brace as Arsenal eased past a much-changed Newcastle to heap more pressure on manager Steve Bruce. The Gunners captain struck either side of a Bukayo Saka goal as the hosts recorded a 3-0 victory which sees them move into the top half of the Premier League table.

Mikel Arteta’s side had to be patient following a goalless first half, but once Aubameyang had found the breakthrough, it was a case of how many for the hosts.

It was another vibrant display from the emerging Smith Rowe, who provided the assist for Saka. Speaking afterwards, Gary Neville believes Arteta has now fully invested his faith in youth following a stuttering start to the campaign.

“He’s found a way forward,” he told Sky Sports. “Going into that Chelsea game, I was there, it was desperate. I was expecting them to get a real good going over by Chelsea. I’d say it was transformative; three Brazilians were out, experienced players, young kids got brought in – and all of a sudden, they looked like a team.

“I remember saying in the first half, the Arsenal fans would like it. They’d like watching it, they’d like watching the players, they’d connect with them, they’d resonate with them. You watch Smith Rowe play, you watch a lot of young players play, particularly in the front areas, they’re frantic. Their choices are a little bit erratic, they don’t normally get it right. “He’s only played six games. Six games? It’s unbelievable he looks so experienced, and I don’t know why he looks so experienced. Maybe it’s those loan moves, being at Huddersfield, going away from home, taking that chance to learn and build your resilience and development. Arsenal fans have got a group of young players they can hang their hat on, and build around.”

Bruce made eight changes from the side beaten by bottom club Sheffield United last week but they were outplayed at the Emirates Stadium, where Arteta continues to oversee an upturn in form.

Arsenal’s two academy stars combined to double their advantage, Smith Rowe darting into the box down the right before squaring for Saka to turn home. Jamie Carragher told Sky Sports: “I just love it for the second goal – he was almost Jack Grealish like with the ball stuck to his toe. He hasn’t just got his head down, gone down the left and pulled it back, and at times you see players put it into a dangerous area and hope one of their midfield players is coming onto it, that’s not a problem.

“But that’s what I love – you feel like he’s always in control. He’s trying to beat a man, he beats him, but he gets the composure right too, and the night belonged to Emile Smith Rowe – I thought he was outstanding.

“He looks like someone who actually plays the right pass for the team at that time. People might watch it and not think it’s very spectacular, but when you play with players like that, who always make the right decision, it’s not about looking good, it’s about helping your team-mate, giving him the ball.”

Smith Rowe has either scored or assisted in seven of his 10 appearances for Arsenal in all competitions, whilst the Englishman has provided two more assists than any other player for the Gunners this campaign.

“I have been a bit unfortunate with injuries but the manager has given me a chance. I am so grateful and I just want to repay him. Any chance I have I want to show I am good enough.

“I’ve been abroad and in the Championship and it has developed me so much off the pitch. I feel like I have matured as a person and it’s helped me in my journey.

How do Newcastle get out of slump?

A fifth away league loss of the campaign is another blow to Steve Bruce and his players as criticism continues to mount on the Magpies boss.

A 1,000-strong supporter group named Toon For Change is now calling for Bruce to be sacked and it remains to be seen if he survives following another deserved defeat.

Bruce insists he is “100 per cent” confident he is the right man to turn around Newcastle’s fortunes, and the 60-year-old remains steadfast in his belief that he can address the problems in the coming weeks.

Asked if he felt he was still the right man for the job, Bruce replied: “I have been in football a long, long time and I’ve managed to do it before. 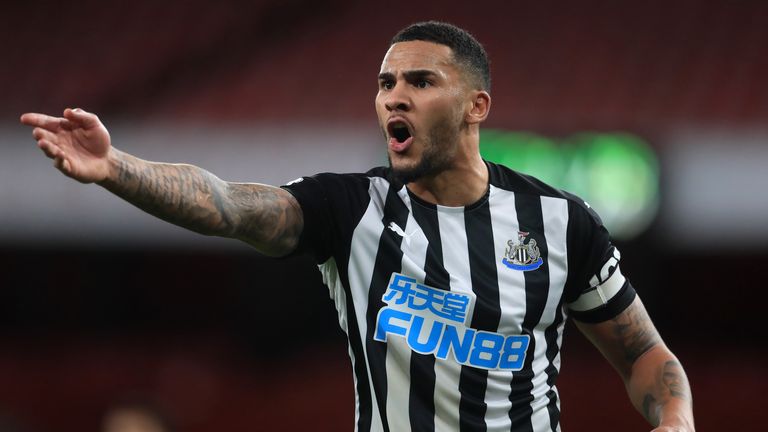 “If you are in the bottom half you are going to have a difficult spell and it is how you cope with it, I’m never going to shy away from it so yes, 100 per cent.

“I think half the league is in a relegation battle. There are only a few points between a few teams, we have been stuck on 19 for a while now.

“But we always knew this was the most difficult part of the season for us in terms of fixtures and the problems we have got. We have got to keep plugging away at it and I’m sure it’ll turn.”

Newcastle are without a win in seven Premier League games, their longest run without a victory in the competition since October 2018, but Neville believes the club’s ownership must change if there is going to be a significant improvement on the pitch. 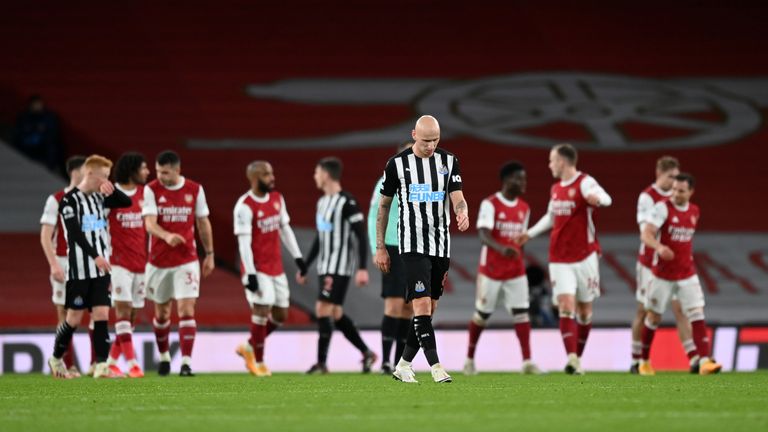 “I felt Newcastle were going to get beat, irrespective of the eight changes,” he said. “I’d expect Newcastle to get beat at Arsenal most seasons, and they’ve not raised my expectations to a level where I feel they can go and win there.

“Steve Bruce shouldn’t be judged on just tonight. Newcastle are 15th in the league, which is where I’d expect them to be. Newcastle fans won’t enjoy me saying that but at the start of last season they were expected to go down and they didn’t.

“This season, you’d expect them to be somewhere between 11th and 15th. That’s where they are but it’s just disappointing. Failure and misery seems to be embedded there over a long period of time, and it’s unlikely to change irrespective of the manager that’s brought in.

“It’s obvious they need new ownership. The owner is willing to sell and one takeover bid didn’t go through. That’s the only thing that’s going to dramatically change that club. It needs to happen as quickly as possible.”

Arsenal will play away to either Southampton or Shrewsbury Town in the FA Cup fourth round on Saturday at 12.15pm before returning to Premier League action at Southampton on Tuesday; kick-off 8.15pm.

Newcastle travel to face Aston Villa in the Premier League on Saturday at 8pm, live on Sky Sports.