Arsenal staged a stunning comeback to draw 3-3 at West Ham United on Sunday in a rip-roaring Premier League derby after they had conceded three times in the opening 32 minutes. 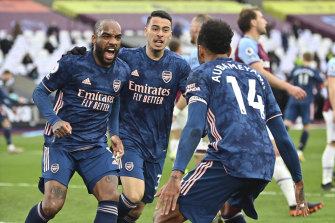 Arsenal’s Alexandre Lacazette celebrates after scoring the equaliser against West Ham at the London Stadium on Sunday.Credit:AP

But when Alexander Lacazette’s shot deflected in off Soucek in the 38th minute Arsenal came alive.

They laid siege to West Ham’s goal for long periods of the second half and pulled back another goal as Craig Dawson scored into his own net just past the hour.

In a frenetic finale, West Ham had chances to seal the points before Lacazette’s 82nd-minute header earned Arsenal what had looked like an unlikely share of the spoils.

West Ham stay in fifth place with 49 points from 29 games, two below Chelsea. 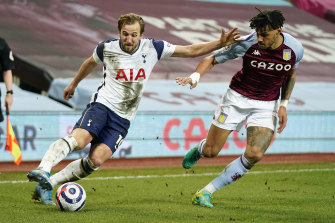 In the day’s late kick-off, Tottenham Hotspur emerged from the gloom of the past week to claim a morale-boosting 2-0 victory at Aston Villa and climb to sixth place in the league.

Tottenham’s sixth successive away league win against Villa moved them above Everton and Liverpool with 48 points from 29 games, three behind fourth-placed Chelsea.

It was quite a turnaround for Tottenham who were heavily criticised for their performance in last weekend’s north London derby defeat by Arsenal and castigated after crashing out of the Europa League with a 3-0 defeat to Dinamo Zagreb on Thursday.

Villa, who were again without captain and playmaker Jack Grealish, started well but were unable to work Tottenham goalkeeper Hugo Lloris, who barely had a save to make. They stay in 10th spot with 41 points. 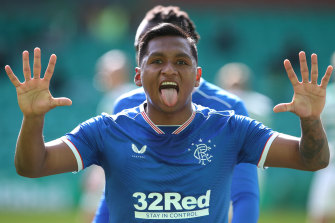 North of the border, Scottish champions Rangers drew 1-1 with arch-rivals Celtic in the Old Firm derby on Sunday after Colombian striker Alfredo Morelos cancelled out Mohamed Elyounoussi’s opener for the home side.

Although no fans attended the game at Celtic Park, the match was played under tight security measures as police were deployed across Glasgow to prevent fans congregating in the city.

Rangers supporters ignored COVID-19 lockdown measures when they gathered outside the club’s Ibrox stadium two weeks ago after clinching their first league title since 2011 and a record 55th Scottish crown.

Rangers manager Steven Gerrard felt his side would be happier with the result after they stayed unbeaten in the league, 20 points ahead of second-placed Celtic with five games remaining.

“We were away from home, we’re the champions, we’ve taken seven points from nine in Old Firm games and we’re 20 points clear so this is a more positive result for us than them,” the former Liverpool and England midfielder told Sky Sports.

“We came here to win but we’re pleased with the point.”

“Performance-wise it was good, the result-wise not so much but I don’t think the result reflects the performance,” Kennedy told the BBC.

“The last few weeks have been about coming together and not falling apart and I thought the players showed that today.”