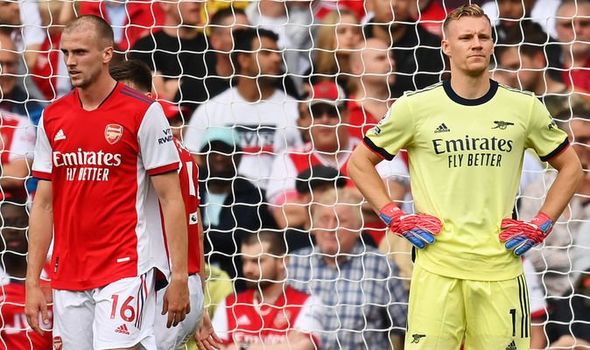 “It’s just Arsenal. Weak. Bullied. It’s men against boys. New season, same old story.” That was Sky Sports expert Jamie Carragher’s assessment after Arsenal’s first match of the new Premier League season, a sorry defeat away at newly-promoted Brentford. His opinion won’t have changed much after their second match either.

The Gunners fell to an 2-0 defeat to London rivals Chelsea at the Emirates on Sunday and throughout found themselves second best physically. The European champions ran out comfortable winners in the end.

Having won their previous three league games against the Blues, here Arsenal were manhandled by the excellent Romelu Lukaku, who made his second Chelsea debut fresh from a club-record £97.5million return to Stamford Bridge.

“I don’t think we deserved anything different,” admitted Mikel Arteta after Arsenal’s flimsy defeat to Brentford a week ago and to their credit his charges were – at least to start with – better here, even though the same old problems proved their undoing.

They started with much more attacking intent and purpose than they showed in the entire 90 minutes against the Bees but once Chelsea struck the first goal through Lukaku after 15 minutes, they were relatively comfortable for the rest of the first half.

The Belgian brilliantly held the ball up to find Reece James to his left before spinning into the box and getting on the end of the full-back’s low cross to tap in and make it 1-0.

After that goal, Carragher’s colleague Gary Neville said on Sky Sports’ co-commentary of the match: “That was classic Lukaku. He’s a guarantee for them.

“That goal won’t shift the thought that Arsenal are a bit soft-centred. [Pablo] Mari can’t play against Lukaku like this. He is getting messed around.”

Arsenal didn’t do a great deal in the remainder of the match to disprove that theory either, with Lukaku getting the better of Mari and Rob Holding throughout. The home team were brittle defensively for the second goal too.

Again Lukaku was at the forefront as he dragged the Arsenal backline around to allow Mason Mount to find James inside the box, the defender thrashing into the far corner to double the visitors’ advantage.

Arsenal were less open in the second half, Neville insisting he at one point “feared” for Arteta’s charges, and to their credit did not wilt. But the damage was done by then and they were unable to get back into the game as they struggled offensively, offering too little to seriously trouble a more resilient Chelsea rearguard.

Only a fine Bernd Leno save prevented Lukaku from making it 3-0 in the final 15 minutes as the striker got in front of Holding to meet a cross.

Admittedly this was an Arsenal team without the £50million Ben White in central defence due to Covid, and with Pierre-Emerick Aubameyang starting on the bench and Alexandre Lacazette again absent, also both due to bouts of coronavirus.

They weren’t the only absentees. Holding midfielder Thomas Partey was missing due to an ankle injury, with Gabriel Magalhaes sidelined by a knee problem. New signings Martin Odegaard and Aaron Ramsdale could not be involved in the match-day squad.

Albert Sambi Lokonga the only new Arsenal signing on the pitch at the start of the game while Nuno Tavares came on as a substitute after Kieran Tierney picked up a knock.

The trouble is, despite Arsenal’s lavish summer spend – having spent more than any other Premier League club to sign Lokonga, Tavares, White, Ramsdale and Odegaard – the same old problem remains.

Arsenal are simply too weak physically in defence, and also in midfield occasionally too. It’s hard to see how those new players will change that either, with White prone to being outfought physically.

Would Partey and Gabriel in the side have improved them here? Perhaps, but the north Londoners even had the same issue last term with the duo as they finished eighth.

That is now Brentford and Chelsea who have reaped the rewards of targeting Arsenal’s soft centre, with White having struggled to deal with Brentford’s Ivan Toney in the opening game. Mari and Holding couldn’t get near Lukaku here.

“Spurs have it that people say it’s ‘Spursy’. I think it’s about time Arsenal have something like that as well,” Carragher said after the Brentford loss.

It was another ‘Arsenal performance’ here with the Gunners too easily dominated at the back, even though they held firm in the second 45. Lukaku’s display regardless evoked memories of the matches in which Didier Drogba and Diego Costa bullied Arsene Wenger’s teams for Chelsea.

With Manchester City up next, it could get worse before it gets better. There’s a lot of work to do at London Colney – especially in regards to Arteta ensuring his team are less fragile in the more physical encounters they will face between now and May. Arsenal’s hopes of a return to European football rely on it.