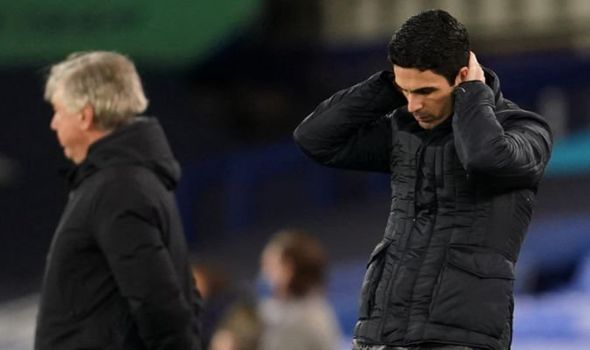 Arsenal suffered a 2-1 defeat against Everton on Saturday evening increasing the pressure on technical director Edu to axe Mikel Arteta and stop the rot. The Gunners sit 15th in the Premier League table, five points outside of the relegation places.

There have been many calls for Arsenal to shake things up and bring in a new boss.

But Sky Sports co-commentator Jamie Carragher has sent a message to Edu, calling for patience.

“For [Arsenal] to get back to where they want to be, they will have to go through a lot of pain and they will do,” said the former Liverpool centre-back.

“A couple of signings they made this season, Gabriel [Magalhaes], [Thomas] Partey, they could be a big part of Arsenal for years to come.

“But they need a few more players in the January transfer window. If Arteta can get six or seven players in then he can be judged on the job that he’s doing.”

And on the club’s recent recruitment, Carragher added: “The recruitment has been shocking, absolutely shocking the last few years for Arsenal.”

Arsenal’s slump has been picked apart over recent weeks and it got no better at Goodison Park, especially because Pierre-Emerick Aubameyang was ruled out through injury.

Stand-in skipper Rob Holding scored an early own goal and Yerry Mina headed home the winner on the stroke of half-time.

The Gunners’ next two fixtures are against Manchester City in the Carabao Cup and Chelsea in the league.

Arteta addressed his position ahead of the trip to Everton, where he acknowledged the risk that comes with poor results.

“It’s something that the day I decided to be a coach I know that one day I will be sacked or leave the football club,” said Arteta.

“I don’t know if it’s the day after I sign my contract, in a month’s time, a year’s time or six months’ time. I never worry about it.

“My only concern is to get the best out of the players, give the best possible service to the club and become better and better.

“I know, I repeat, in this profession, one day I will get the sack or leave but I don’t know when that is going to happen.”