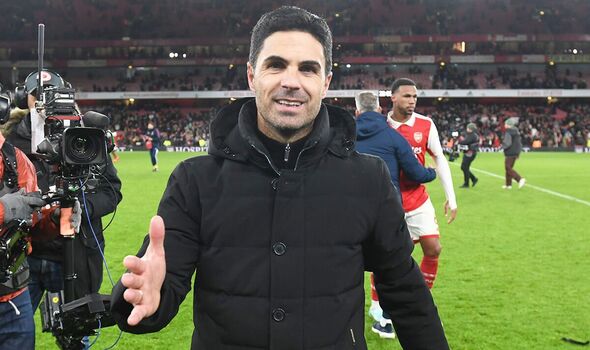 Arsenal boss Mikel Arteta can complete two of his transfer wishes for free. The Spaniard is reportedly keen on signing a centre-back and central midfielder but could wait until the summer to complete a pair of bargain deals.

Arsenal are in the market for a forward in January. That is alongside the priority signing of a winger, with Mykhaylo Mudryk the top target.

Arteta said recently he is always in the market to strengthen his squad and cannot afford to let a window pass by without using it to its maximum potential. The arrival of a striker would lessen the burden on Eddie Nketiah, who is currently the only fit option through the middle.

But the Evening Standard says a left-sided centre-back and a central midfielder are also on Arteta’s radar. Both of those deals could be completed for the grand total of £0 in terms of transfer fees.

Mikel Arteta on the transfer window and strengthening the squad

The report says Eintracht Frankfurt defender Evan Ndicka is a player admired by Arteta. Ndicka is out of contract at the end of the season and could therefore strike an agreement with a foreign club in January ahead of a summer move.

The Frenchman is left-footed, so fits the bill in that regard. He would provide back-up and competition to Gabriel Magalhaes.

Meanwhile, Leicester star Youri Tielemans is also out of contract in the summer. He has been linked with Arsenal throughout 2022 but the Gunners are yet to make a move.

Tielemans is keen on a switch to the Emirates. If he holds out, a free transfer may be on the cards at the end of the season.

Signing both players for free would be a major boost to Arteta. That would allow other funds to be spent on more pressing areas of the squad.

Speaking last week, Arteta insisted he will be active in January. However, he is cautious of bringing in the right player ahead of a potential title push.

He said: “We are going to be active, and active means always looking to strengthen the team. This squad still doesn’t have the luxury of not maximizing every single window and we have to do that because it’s really important.

“But then we want to get the right profile, the right player and a player that is really going to impact the team and take us to the next level.”