Arsenal and Manchester United’s perceived lack of interest in Thiago Alcantara has been questioned by former England striker Darren Bent. Bayern Munich midfielder Thiago is heavily linked with a move to Premier League champions Liverpool. The 29-year-old is out of contract at the end of the upcoming season and would reportedly be available for £23million.

Bent believes Liverpool must add to their squad despite their record-breaking title success last term.

However, he does not understand why Arsenal and United are not showing a strong interest in Thiago as well.

“Just because you won the league this year you can’t just sit back because Chelsea look like they’re having a go, United will have a go, City will come again. 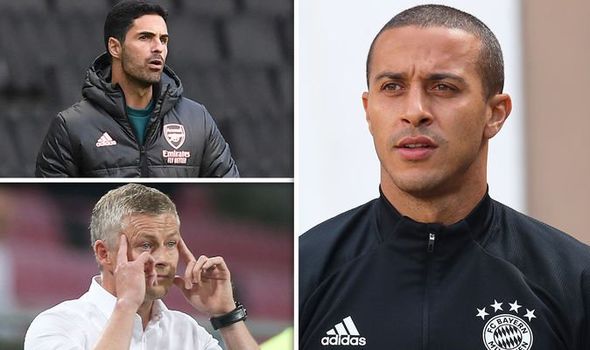 “So they need to strengthen and bringing in someone like Thiago Alcantara, what a player he is.

“What I don’t understand is why are Arsenal not in for him? Chelsea can’t because they’re signing everybody, United, City.

“He is a top, top player, we saw what he did in the Champions League final.

“For £25m you would think all the top teams around Europe would go: ‘We’ll have some of that’.

Bent is not sure if Thiago would be an instant starter if he did join Liverpool.

But he thinks Georginio Wijnaldum would be the man to miss out if the Spain international did complete a move to Anfield.

He continued: “But does he walk straight into their starting XI? Because Fabinho’s a fantastic holding midfielder, you’ve got Wijnaldum who’s done well this season, Henderson’s their captain.

“I think he’s a better player than Wijnaldum but I don’t think he would score as many goals as Wijnaldum.”

Wijnaldum himself is out of contract at Liverpool next summer and talks over an extension have not progressed.

The Dutchman has been linked with a move to Barcelona following the appointment of Ronald Koeman as manager.