Algeria vs Sierra Leone LIVE: Riyad Mahrez and Co look to defend their AFCON title against the African minnows playing at their first tournament since 1996

Algeria will be looking to defend their Africa Cup of Nations crown today as they lock horns with minnows Sierra Leone hoping for a perfect start.

The 2019 champions are bolstered by Manchester City star Riyad Mahrez and West Ham midfielder Said Behrahma and will be keen to set out their intentions to become one of the favourites to take home the trophy again.

They are up against a fairly inexperienced Sierra Leone side who are competing at their first AFCON tournament since way back in 1996. It’s an exciting moment for them – with former Tottenham and Liverpool defender Steven Caulker selected in the squad after switching allegiance last year.

Algeria have dominated the possession with around 73 per cent, but it’s Leone who have had the most meaningful chances on the counter. They look a real threat going forward but haven’t clicked yet in the final third.

ANOTHER missed opportunity for Leone! They get a free kick in a dangerous position taken by Bunda and Bangura gets up to nod the set piece wide of the mark.

You feel they can’t afford to miss too many more of these.

Nice touch and turn by Belkebla and then finds Brahimi on the left – but his cross hits the first man. The former Porto star later receives the ball by the touchline but a poor touch sees him lose control and out it goes for a throw-in.

A. Kamara goes in dangerously on Bedrane and gives away a free kick.

There aren’t too many fans here today, but those who are present are making themselves heard with vuvuzelas and music. Great atmosphere.

Dangerous crossed is whipped in by Atal, who had burst into the area. Slimani was lurking before Bangura got it out of the danger zone. A corner is cleared and Belaili hammers a shot against the arm of Alhaji Kamara.

They’re checking this on VAR. Officials are happy, nothing given. 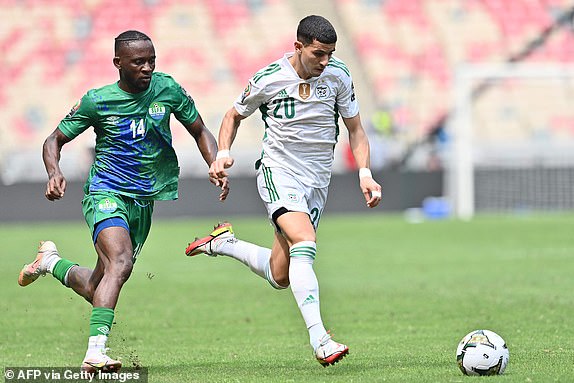 Sierra Leone could be two up! They go up the other end and a quick cross is fizzed in for ex-Middlesbrough striker Kei Kamara, 37, who somehow steers his effort wide of the post with the goal gaping. Huge let off for Mahrez and co.

Beautiful through ball by Mahrez picks out Slimani, who rounds the keeper but the angle is a little too tight and he fires over.

Then Mahrez himself himself is played through with absolutely acres of space on the right, pinging it across to the opposite flank – but a dinked cross has too much air on it and misses the head of Slimani. 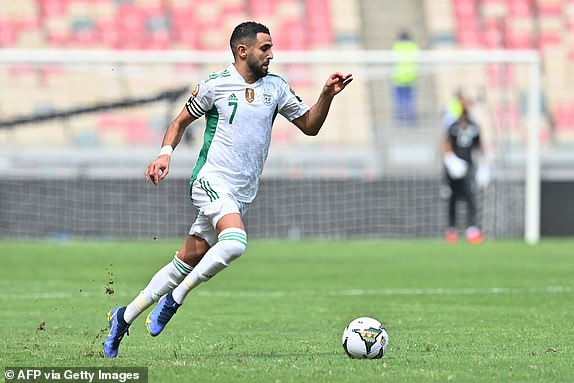 Big chance for Sierra Leone! Bedrane loses focus and doesn’t see Turay running in behind him – he manages to get a shot off that deflects behind for a corner.

Danger signs early on there for the reigning champions.

Algeria get us underway.

Both sides lining up and what a great atmosphere we’ve got in this stadium – with fans dancing and getting excited in the stands.

We’ll have both national anthems ahead of kick off. 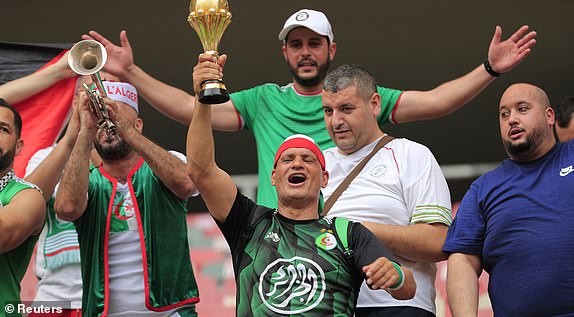 He’s a fairly new addition to Sierra Leone but no doubt Caulker will bring experience to their back line, as well as leadership to calm things down on a nervy opening game.

Caulker has endured his own personal struggles but now is his opportunity to showcase his ability on a big stage.

A little pre-match reading for you here. Algeria come into this tournament enjoying a 23-match unbeaten streak and will be looking to replicate their heroics from 2019 – when they united a nation divided by a political crisis. 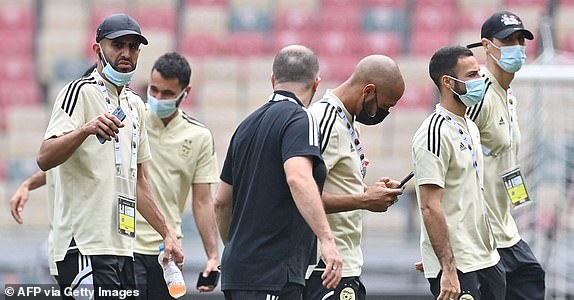 Here we go then, Riyad Mahrez starts and captains the side, former Leicester striker Islam Slimani is up front alongside ex-West Ham man Sofiane Feghouli, with highly rated Nice defender Youcef Atal at right back. Said Benhrahma can only managed a spot on the bench.

Sierra Leone have Steven Caulker starting in defence, with QPR defender Osman Kakay at right back. They also have FOUR players with the last name Kamara in their starting line-up, and another on the bench.

Hello and welcome to our live AFCON coverage of Algeria vs Sierre Leone!

It’s a Tuesday lunchtime, it’s live football and a handful of top stars involved too. What more can you want? The tournament kicked off on the weekend, but now it’s Algeria’s turn to set the tempo as they look to retain the crown they won in 2019.

Manchester City’s Riyad Mahrez and West Ham’s Said Benrahma are just some of the stars who should be on display today – up against a relatively inexperienced Sierra Leone side playing at their first tournament since 1996. Anything can happen at AFCON, and it has the makings of a cracker. Join me for all the latest updates in this one – kick off is at 1pm GMT. 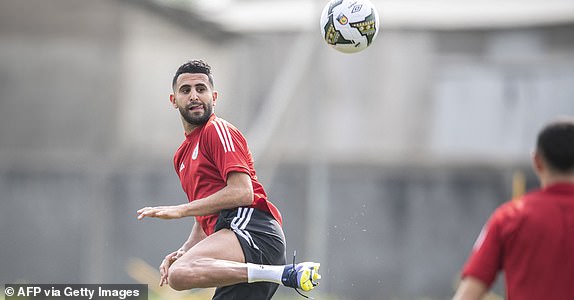