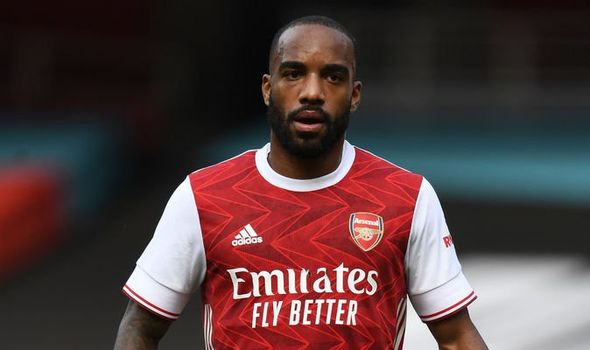 Arsenal striker Alexandre Lacazette had a phone call with Lyon chief Juninho Pernambucano earlier this year about returning to his former club on loan, but his wages prevented any deal.

Lacazette endured a tricky third campaign at the Emirates, as did much of the Arsenal team, and managed only 10 Premier League goals.

Midway through the campaign the France international endured a barren spell which eventually coincided with him dropping out of the starting line-up for a stint under Mikel Arteta.

The Spanish coach instead utilised Eddie Nketiah as his No 9 upon the academy graduate’s return from a loan at Leeds United.

But thanks to his contributions from the bench and a suspension for Lacazette after the restart, the 29-year-old battled his way back into the side. 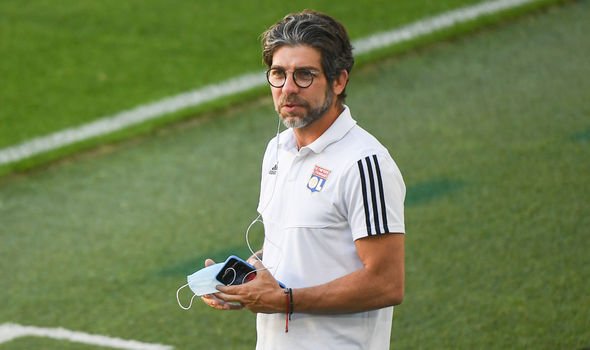 He scored three times in the final five games, also laying on five assists, and led the line in the FA Cup semi-final and final wins over Manchester City and Chelsea.

Lacazette’s long-term future in north London still remains uncertain with Atletico Madrid and Juventus among the mooted potential suitors for the frontman, who has just two years left on his Arsenal contract.

And Lyon chief Juninho has now revealed how he sought to bring Lacazette back to the club where he was previously so successful earlier this year.

Lacazette was a one-in-two striker in Ligue 1 and left France with a record of 100 goals and 32 assists in just 100 appearances.

He has been less prolific in England despite mustering a still respectable 37 goals and 21 assists in 97 appearances.

Yet despite interest in taking him back to his home country, Juninho admits the player’s £180,000-a-week wages prevented a temporary return to the Groupama Stadium.

“In January, I called Alexandre Lacazette to chat with him a bit because he was having problems with Arsenal,” Juninho told RMC Sport’s Top Of The Foot show.

“I was like: ‘Why not a six-month loan with us where you’re going to have fun, play every game and score goals like you know you can? And then you go back to Arsenal or elsewhere.’

“But from the moment you look at the contract level of these players, like at Juventus or Barca, it is not for us today.”

Despite his contract situation, Lacazette said of his future last month that he is playing for his “dream club in the UK” in Arsenal.

And he dropped a fresh hint over his future last weekend after a fan posted on an Instagram post of Lacazette’s after a pre-season friendly with Aston Villa, ‘One word. STAY.’

Lacazette responded to the fan account’s comment with just a wink emoji, leading plenty of fans to believe he is going nowhere any time soon.

Juninho also revealed how he has held conversations over the phone with Arsenal technical director Edu more recently regarding Lyon midfielder Houssem Aouar.

The 22-year-old is admired by Arteta and the Arsenal hierarchy, who would love to bring Lacazette’s France team-mate to London. 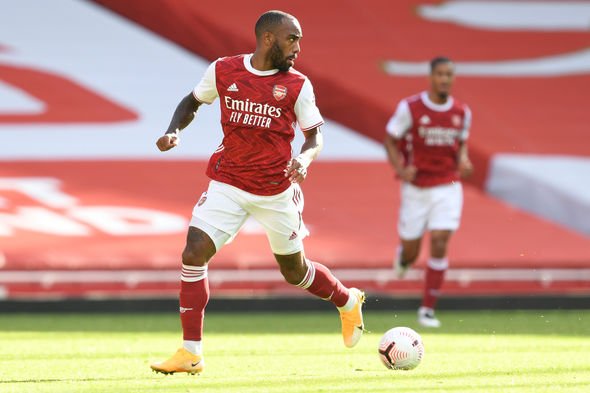 And Arsenal are thought to have made a £31m bid, which also included Matteo Guendouzi in a player-plus-cash deal, a few weeks ago.

Lyon rejected the offer however and Juninho explained: “I get along very well with the sports director [Edu]. We spoke on the phone.

“Houssem Aouar is really appreciated by Arteta. There have been some discussions for Matteo Guendouzi who is also a good player.

“He was mentioned during the discussion, but this is not the profile we need, we were very clear.

“If it is like that, it does not interest us at all – it is, and we stopped.”