Derek McInnes last night warned transfer predators there will be no fire sale of Aberdeen’s biggest talent to fill the financial void created by coronavirus.

Chairman Dave Cormack admits the Pittodrie club are losing £1million a month during lockdown, and the cost of testing management, players and staff between now and the end of the year is expected to tip £100,000.

However, speaking as Dons management and players prepare for a return to individual pre-season training sessions on Monday, boss McInnes told would-be suitors they will be wasting their time trying to poach Lewis Ferguson – who has been linked with Rangers – Scott McKenna or Sam Cosgrove for less than the market rate. 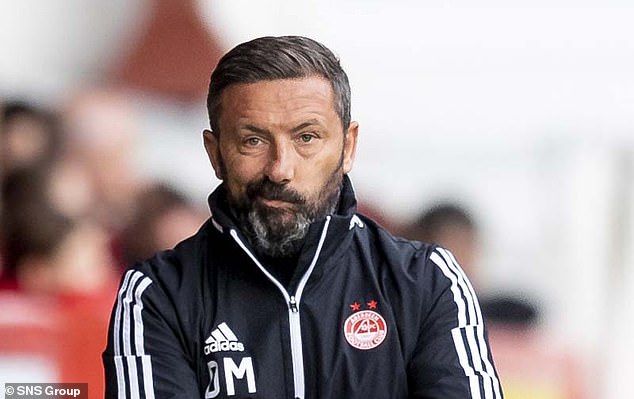 ‘Obviously you want to work with good players as long as you can as a manager,’ he told Sportsmail. ‘But every player has a price – we understand that.

‘Despite the difficulties every club will be having, some will be better equipped to deal with this than others. And there will be clubs south of the border actively trying to put squads together who will see Scotland as a place to try and strengthen.

‘In Scott, Lewis and Sam we have three very good players in terms of the value they add to the club. But the chairman has been pretty adamant and consistent in saying there will be no fire sale here. No-one will leave for a fee below their market value.’

McInnes won’t rule out a return for winger Jonny Hayes, recently released by Celtic, but admits there may not be much wriggle room in the transfer market so long as the club are starved of gate income. That could change if an acceptable bid comes in for one of his top performers.

Scott McKenna has attracted previous bids from Hull, Celtic, Aston Villa and QPR, while Scottish Football Writers’ Young Player of the Year Ferguson has been linked with Ibrox and Cosgrove with Stoke and Lazio.

‘I’m delighted with the progress of the three players people are talking about,’ said McInnes. ‘McKenna has come through the academy system, Cosgrove and Ferguson between them cost £250,000.

‘The three boys have a huge value to the club but they are also very important players on the pitch for us in each department of the team. We always want to hang on to our best players as long as possible, but we recognise at Aberdeen there comes a point where they move on.’ 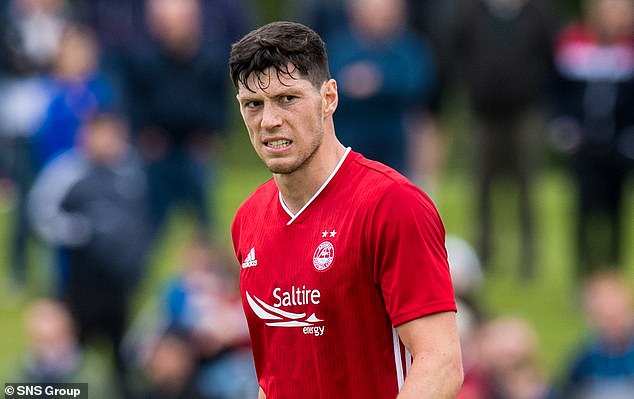 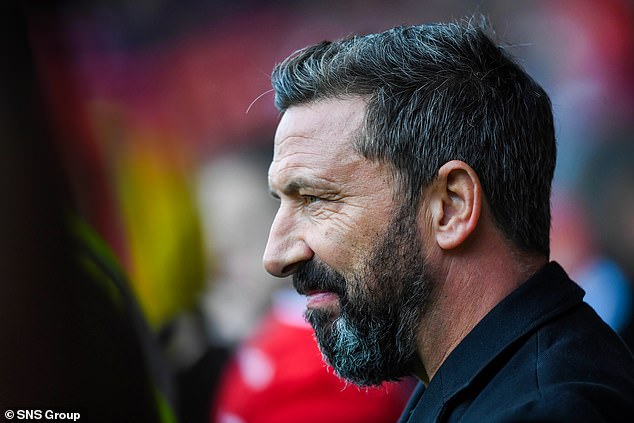 Welcoming the news of £50,000 grants to help SPFL clubs with the cost of testing from philanthropist James Anderson, McInnes added: ‘I have never met James but I have heard he is a brilliant man and his influence on Hearts is clear. The fact he has offered to share his financial fortune around the other clubs is hugely welcome and an absolutely fantastic gesture.’

Playing down suggestions Premiership clubs should pass on their allocations to lower league clubs, McInnes added: ‘I can’t see any club being able to come through this period without looking at all aspects. That is regardless of the fanbase, because when there are no fans coming in you have to look at other ways of filling the gap.

‘The chairman has spoken about the hole we are having to fill at the minute. We have already taken measures to try and deal with that. If we are not back playing in front of crowds by January then we have to look at everything.

‘It will be challenging over the next wee while but we will make a conscious effort to keep the club on a sound financial footing.’