It’s no coincidence that Ben Cummins got off social media just as his record-breaking refereeing career began. 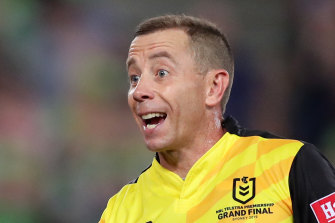 Ben Cummins is on course to set a record that may never be broken.Credit:Getty Images

“I joined Facebook and I thought ‘Nah, it’s taking up too much of my time.’ That would be 15 years ago and I haven’t used another platform since.

“Hopefully, like Erin Molan’s [interview showed], people need to get more educated about it.”

Cummins loves the game and doesn’t mind talking about it with fans if it’s in a positive way. However, he’s unlikely to be the instigator of a chat if you bump into him in the supermarket.

“I’m a bit of an introvert,” he said. “I probably don’t mean to but I look down a bit, there’s no eye contact. 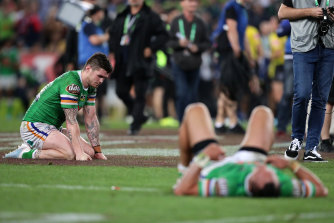 Cummins’ most contentious moment came with the infamous ‘six-again’ call against Canberra in the 2019 grand final.Credit:Getty

“That’s why I can walk through the shops. My wife will say that everyone looks and points and my way of doing it is looking down and not making eye contact with people.”

Some of Cummins’ best and worst moments have come on the biggest stage. He walked off the field after the epic Cowboys-Broncos grand final exhausted but satisfied with the role he played in one of the greatest deciders of them all.

Four years later, Cummins was grappling with suicidal thoughts due to the fallout from his infamous ‘six-again’ call in the Roosters-Raiders grand final.

“You have this composed image, that you’re in control, but after ’19 I wasn’t in control,” he said.

“It was like a spiral down. That was one of the toughest things, not just for me but for the family.

“It should have been a celebration, a grand final, but it was far from it.

“Dealing with putting the pieces back and refereeing again was a challenge.”

So how did he get through it?

“Good question. Probably self-belief, having good people around me who can read when you’re down or not in a good spot and pump you up a bit, I suppose,” Cummins said.

“I’ve made plenty of stuff-ups, more than the average person, so you get used to it. I had that self-belief and drive to prove to myself that I belong where I am.

“I just wanted to get back and finish on a good note, not with that hanging over my head.”

When Cummins will hang up the whistle remains unclear. However, there is a passion to go beyond this year, which could result in the man dubbed “Teach” setting an appearances record that will never be surpassed.

“I’d love to go this year and next year but we’ll see what happens, what [management] think,” he said.