Earlier this week a couple of Brianna Davey’s soccer contemporaries Sam Kerr and Ellie Carpenter played in the knockout stages of the European Champions League.

Indeed, for the past year, a long line of Davey’s former Matildas teammates have stepped out for the very best of Europe’s giant soccer clubs. 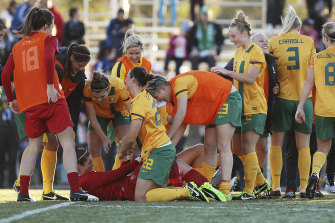 Few doubt that Davey, 26, once a goalkeeper who was capped 17 times for the Matildas between 2012 and 2015, could have been playing for a Chelsea, Arsenal or Lyon this week if she’d remained on her path.

Instead, Davey is this weekend playing in the finals for Collingwood against North Melbourne, in an AFLW competition that continues to fight for coverage.

This AFLW season, the fifth, has built impressively following a strong start over the first four seasons. 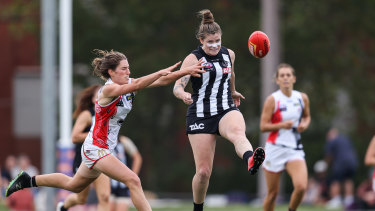 Davey playing for the Pies in the 2021 AFLW season. Credit:Getty Images

But Australian rules can’t compare with the scope and size of European soccer, nor can it offer a World Cup. The Matildas can and they will experience one on home soil in 2023.

Davey has said before she made the right choice to play footy in 2016 when the AFLW was established. But that was before the events of the past year with European clubs clamouring for Australian talent, and before Australia and New Zealand were chosen to host the 2023 World Cup.

“I definitely don’t regret it,” Davey said this week. “Do I ever think about it? Absolutely. There’s been times where I have thought ‘oh, I wonder if I was still playing soccer’ and things like that.

“I don’t take back my decision whatsoever. I absolutely love playing footy and for me, when I made the swap, it was with the lifestyle, playing soccer and travelling the world, in mind.

‘I definitely don’t regret it. Do I ever think about it? Absolutely.’

“I was getting to the point where I was burning out a little bit [because of travel with the Matildas] and was really missing my family and being home and being able to enjoy the little things.

“I love being home and love the game of footy. It has always been my number one choice.”

It must also be said that about a year before she chose to play footy Davey had been surprisingly dropped from the Matildas squad for the 2015 World Cup, where the side reached the quarter-finals.

But the Pies co-captain remains in touch with her Matildas friends. 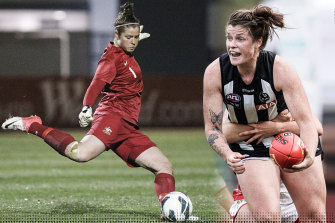 Brianna Davey playing for the Matildas in 2013 (left) and wearing the Collingwood colours.Credit:Getty Images

“I have a lot of mates over there playing and it has been tough [because of the pandemic],” Davey said. “We are fortunate here. I feel for them and the girls who couldn’t get home over Christmas, that’s really hard stuff.

“Steph [Catley of Arsenal and the Matildas] is one of my best friends. We played all our juniors together and essentially grew up together.

“We chat often and keep in touch as much as we can. When we see each other it’s like nothing has changed.

“She is an incredible athlete and someone I have always looked up to and loved as a person.”

The Pies developed into one of the AFLW’s best teams in 2021 but missed a top-two finish after losing two of their last three matches, pushing them into their clash with North Melbourne in the first week of the finals on Saturday.

“This group has a great connection and care for each other,” Davey said. “We don’t want to be leaving this season [losing to North this week] with that sour taste in our mouth, thinking that we could have done better.”