NSW skipper Kezie Apps says it has been awkward "mixing with the Queenslanders" ahead of the women's State of Origin clash after both sides were housed in the same hotel on the Sunshine Coast.

Apps says the sides pass each other every day due to the NRL's strict COVID-19 provisions, which require both teams to remain within the grounds of the hotel while in the Origin bubble. 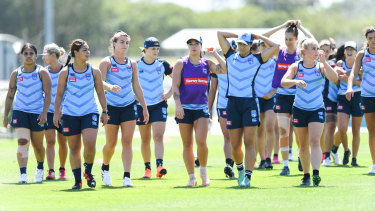 The NSW women’s squad trains on the Sunshine Coast this week.Credit:NRL Photos

Apps said the NSW side is required to walk by the rooms of the Queenslanders on their way to recovery sessions.

"We still have that respect for them … it's pretty short and then we go off and do our own thing," she said. "It is definitely different and not something we are used to."

The experience has been particularly difficult for Millie Boyle, who plays for the Broncos during the NRLW season. Twelve Broncos were selected in the 20-player Maroons squad.

"I think it's a bit harder for her," Apps said. "She's a Blue through and through, so will be wearing a different hat in a couple of weeks."

The two sides are also sharing an events room, which has been divided into two.

"We sort of pass each other day to day, but that's just how it is," Apps said. "It does throw a spanner in the works, but … we can't do much about that, we've got to make do."

After ruling herself an 80 per cent chance to play last week after injuring her knee in the second round of the NRLW season, Apps has now upped her chances to 90 per cent after a solid running session on Monday.

"I would play regardless if I had the choice, but it doesn't come up to me, it comes up to the physio and the doc," she said.

Apps has been completing her rehab with Dragons teammate Isabelle Kelly, who injured her ankle in the same game.

Kelly said that while the hotel situation was not ideal, NSW needed to ignore it and "continue to focus" on the game.

"It's a bit hard at the same time because you're trying to build a bit of rivalry and you're also mates," she said.

Kelly said she and Apps managed to do some contact training on Tuesday and would likely be ready in time for November 13.

"It's nice that we are both tracking well because it would be really hard if one of us was going really well and one of us wasn't," Apps said. "It makes it a lot easier me and Kez having each other [to push each other] … we are a bit competitive with one another."